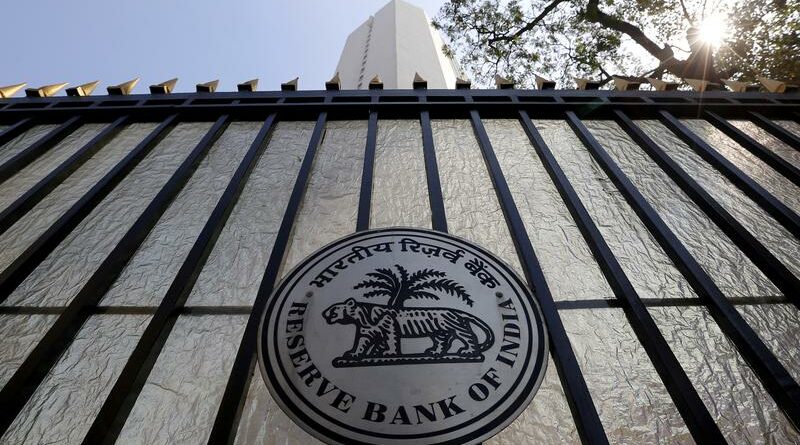 (Reuters) – The Reserve Bank of India’s monetary policy committee kept interest rates steady at record lows on Friday, as widely expected, but traders are awaiting its comments about inflation and liquidity normalisation for further clues on the outlook.

FILE PHOTO: The Reserve Bank of India (RBI) seal is pictured on a gate outside the RBI headquarters in Mumbai, India, February 2, 2016. REUTERS/Danish Siddiqui/File photo

All 60 economists polled by Reuters had said they expected no change in the repo or reverse rates, which have been kept steady since May last year.

“We derive comfort from the fact that the inflation trajectory is turning out to be more favourable than anticipated,” Governor Shaktikanta Das said in a speech after the policy decision.

“The RBI’s stance on liquidity management was the most watched for. As we expected, the RBI did not shock the system with a reverse repo hike, and the policy is well used as a lever to prepare markets for a gradualist approach towards normalization through both communication and action.”

“We do not see the RBI deploying any direct tightening tools. Instead, we expect the RBI to let natural stabilizers like increased credit offtake and high currency in circulation etc. to reduce the liquidity surplus.”

“The RBI has taken an extremely balanced approach, given that the Indian economy continues to be resilient but aggregate demand has still not reached pre-pandemic levels.”

“While inflation will remain a major area of concern, especially given the increase in energy prices across the globe, the focus is likely to be on sustaining growth till the time inflation remains below RBI’s forecast of 5.3% for FY-22.”

“Indian markets’ bull phase continues and now the focus will be on global cues, especially the change in monetary policies of central banks of other major economies and unwinding the expansion of their balance sheets.”

“Today’s policy, while on the expected lines on rates and stance, was more balanced, notwithstanding multiple global uncertainties in the form of expected Fed taper, China slowdown and energy crisis.”

“The supportive domestic macro backdrop on inflation and growth has allowed the central bank to remain accommodative in our view.”

“The RBI revised lower its FY22 inflation forecasts by 40 bps to 5.2% due to less-than-expected inflation prints. The evolution of inflation is likely to remain benign on an annual basis in coming months.”

“While the growth has improved, the recovery is still uneven with output below the pre-pandemic level. Overall, we expect the RBI to keep its policy rate unchanged but continue to manage excess liquidity.”

“The central bank seems comfortable with the inflation trajectory at this point and focused on supporting growth. In our view, the real action in the policy today was a statement that noted further G-SAP operations was not required for now.”

“The RBI governor notes that output is still below pre-pandemic level and recovery needs policy support. As highlighted, the governor pushed for cutting indirect taxes on fuel to contain inflation pressures.”

“The RBI reiterated its commitment to the inflation target by highlighting that it is watchful and would like to guide inflation to mid-point target (of 4%) in a gradual and calibrated fashion.”

“The key takeaway was the calibration of liquidity surplus that currently stands close to a record level of 13 trillion rupees ($173.41 billion).”

“Expanding the scope of variable reverse repo rate auctions and ending of G-SAP operations would nudge short-term money market rates gradually up, towards the middle of the policy rate corridor.”

“This, we believe, will lay the ground for interest rate normalization. Hence, we maintain our call of 40 basis points (bps) upward adjustment in the reverse repo rate between December 2021 and February 2022, followed by a 25 bps hike in the repo rate in Q1 FY22.”

“The guidance delinked the accommodative stance on policy from liquidity absorption, implying that policymakers remain circumspect about growth prospects while inflation risks are under watch.”

“Add to this, the central bank emphasised that ‘one size does not fit all’ when it comes to the rate path, suggesting domestic considerations will outweigh global catalysts on deciding if and when to tighten policy.”

“Along our expectations, the inflation forecast was lowered, and GDP growth was retained. Ceasing bond purchases is likely a precursor to raising the reverse repo rate in a phased manner.”

“A unanimous decision by the MPC members to keep the policy rates and accommodative stance unchanged should calm the nerves of market participants and control the volatility in bond yields across tenors.”

“An emphatic statement by the governor explaining the rationale behind today’s decision and clear forward guidance will hopefully keep market conditions more orderly in the remaining part of FY22.”

“With today’s measures, we view the RBI as waltzing into a calibrated exit from its accommodative policy beginning with liquidity reduction. We expect reverse repo rate to hike in February 2022. By then, there would be sufficient clarity on possible impact, if at all of wave 3 of COVID-19, the Fed’s policy, and the impact of higher global commodity prices owing to supply-side shocks.”

“The RBI policy, as expected, remained cautious and in a wait-and-watch mode. Even as it increased the quantum under the 14-day VRRR auctions and opened the option of 28-day VRRR auctions, it adequately sounded out on its dovishness and the need to ensure liquidity conditions remain comfortable.”