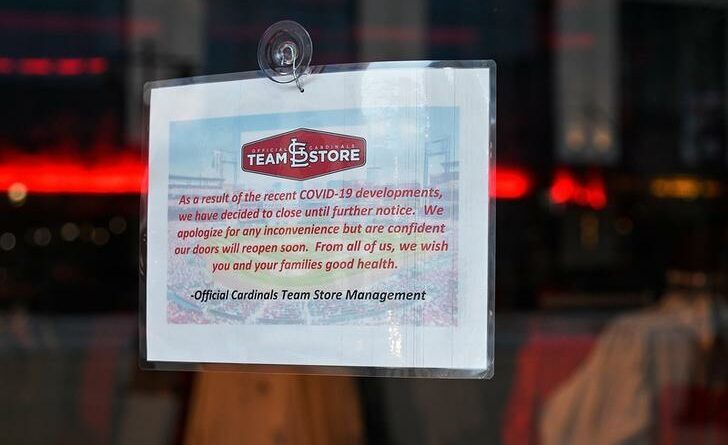 (Reuters) – The governors of Missouri and Tennessee are joining five other Republican-led states in ending all federally funded pandemic-related unemployment benefits this summer, saying the extra money is keeping those out of work from rejoining the labor force and making it hard for employers to fill jobs.

Mar 17, 2020; St. Louis, Missouri, USA; A sign hangs on the door to the St. Louis Cardinals team store located inside Busch Stadium stating that they are closed due to COVID-19. MLB announced yesterday to push back Opening Day even further after the CDC recommended no events with 50 or more people for eight weeks. Mandatory Credit: Jeff Curry-USA TODAY Sports

“While these benefits provided supplementary financial assistance during the height of COVID-19, they were intended to be temporary, and their continuation has instead worsened the workforce issues we are facing,” Missouri Gov. Mike Parson said in announcing the decision on Tuesday.

It’s a contention widely shared by businesses and was behind the U.S. Chamber of Commerce’s call Friday to end the aid nationally after a government report showed employers hired only 266,000 in April, about a quarter of what had been expected.

The benefits were extended as part of the $1.9 trillion government aid package backed by the Biden administration and passed by a narrowly divided Congress.

Alabama, Arkansas, Mississippi, Montana, and South Carolina have also announced plans to terminate the benefits they blame for slowing hiring.

But it’s an idea that is hotly disputed.

“Cutting pandemic UI benefits now, as some states have done or are considering, will not just hurt workers who are depending on federal benefits while they cannot find work or are unable to work, it will also drag on the economy, as those benefits are supporting spending,” wrote the left-leaning Economic Policy Institute’s Josh Bivens and Heidi Shierholz.

Federal Reserve policymakers, who typically try to stay out of partisan debates, on Tuesday pointed to factors other than unemployment benefits for keeping workers on the sidelines.

“People do actually want to go back to work; they are willing to do that,” Federal Reserve Governor Lael Brainard said on Tuesday, adding that school closures meant many needed to look after children and couldn’t look for jobs.

And they fear exposure to a virus that still claims nearly 700 American lives a day.

In April when the data for the jobs report was collected, only one in four working-age Americans were fully vaccinated, she said.

All seven states ending the pandemic benefits for workers have vaccination rates below the national average. All also have below-average seven-day averages for new cases.

Collectively, about 5.5% of the labor force in the seven states that have announced plans to end pandemic benefits were drawing on some form of unemployment insurance, government data shows.

But those benefits – which include an extra $300 a week in pay for the unemployed – may loom larger for workers in states where wages are relatively lower, or regular unemployment benefits are smaller.

The extra sum more than doubles Tennessee’s maximum weekly benefit of $275, for example.

St. Louis Fed President James Bullard said such state-by-state differentials could mean that in some places, pandemic benefits could indeed be holding back some workers.

“Rural labor markets are very different from urban ones,” he said, and some cities are more expensive than others. The same $300 “incentivizes people very differently.”

The extra unemployment benefit “is a factor,” he said. “It is not the only factor.”