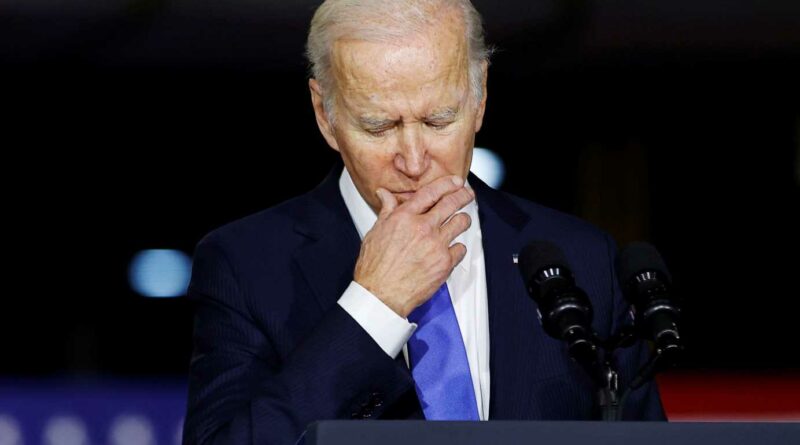 Amid growing worries over Covid and the economy, President Joe Biden's approval ratings in both areas took yet another hit while Americans' preferences for congressional control swung sharply towards Republicans.

Biden's overall approval rating stabilized at a low level of 41%, about the same level as former President Donald Trump's, compared to 50% who disapprove.

But Biden's approval rating on handling the economy and dealing with the coronavirus both declined.

At 46% approval to 48% disapproval, Biden's approval rating on the coronavirus is now underwater for the first time.

His economic approval sank more deeply underwater, with 37% approving compared to 56% who disapprove, down from 40% approval to 54% in the second quarter survey.

"The Covid (approval) number is actually I think the more important one," said Micah Roberts, partner at Publican Opinion Strategies, the Republican pollster for the survey "As goes COVID, so goes the Biden presidency, and that's really proving to be quite true."

The poll of 800 Americans nationwide has a margin of error of plus or minus 3.5%.

The data show the president has lost ground among key support groups that propelled him to victory in November.

The approval rating among those who voted for him has dropped from 80% to 69% in the April survey. There have been notable declines among Americans 18-34 and suburban residents, both of whom, in dramatic swings, now register net negative views on the president.

As bad as Biden's number may be, the polling data for Democrats in Congress is far worse.

Republicans now sport a historic 10-point advantage when Americans are asked which party they prefer to control Congress, holding a 44%-34% margin over Democrats. That's up from a 2-point Republican advantage in the October survey.

In the past 20 years, CNBC and NBC surveys have never registered a double-digit Republican advantage on congressional preference, with the largest lead ever being 4 pints for the GOP.

"If the election were tomorrow, it would be an absolute unmitigated disaster for the Democrats,'' said Jay Campbell, partner at Hart Research Associates and the Democratic pollster for the survey.

American's views on the state of the economy look to have helped drag down both Biden's and the Democrats' numbers.

Some 41% of the public believe the economy will get worse in the next year, a modest improvement from last quarter but still a largely pessimistic number by the survey's standards and up from a year ago.

Inflation has now firmly eclipsed the coronavirus as the No. 1 concern for the country, with those two issues followed by immigration, crime and climate change.

But Democrats have lost ground on the issues.

Regardless of what respondents believe to be the top issue facing the country — inflation, coronavirus, and even climate change — their preference has shifted towards Republican control of Congress.

For example, those who thought climate change was the most important issue in October preferred Democratic control of Congress by a 59-point margin. That's now fallen to a 33-point margin.

Respondents who chose unemployment as the most important issue preferred Republicans by a 24-point margin, up from 14 points in October.

Democrats have lost ground and Republicans have gained in in critical geographic areas.

So-called urban ring counties (those surrounding cities) favored the Democratic candidate by 8 points in the presidential vote. Those counties now prefer a Republican control of Congress by 5 points.

Both the Republican and Democratic pollsters believed it would be difficult but not impossible for Biden and the Democrats to avoid massive losses in the November elections if these numbers hold up.

Getting control of Covid and inflation were seen as the obvious keys. But with off-year elections usually leading to losses for the incumbent party, the question is whether the Democrats losses will be bad or historically bad.

Technology to keep lights on could help prevent wildfires