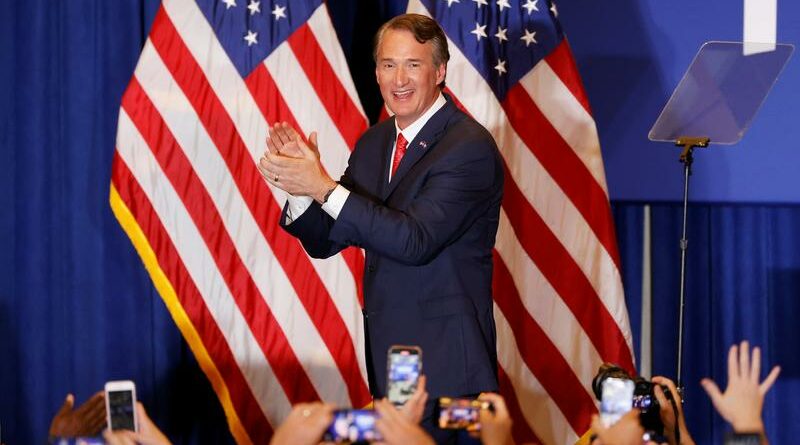 FAIRFAX, Va. (Reuters) -Republicans pushed Democrats out of the Virginia governorship and came up just short of an upset in heavily Democratic New Jersey on Wednesday, signaling trouble for President Joe Biden’s party heading into next year’s congressional elections.

In Virginia, Republican Glenn Youngkin here, a former private equity executive, beat former Governor Terry McAuliffe in Tuesday’s vote, with the Democrat conceding on Wednesday morning. Youngkin had distanced himself just enough from former President Donald Trump to win back moderates who had supported Biden only a year ago.

In New Jersey, incumbent Democrat Phil Murphy squeaked by Republican challenger Jack Ciattarelli, even though registered Democratic voters outnumber Republicans there by more than 1 million. The result had been in doubt until the Associated Press called the race for Murphy on Wednesday evening, sparing the Democrats a humiliating defeat.

Ciattarelli, 59, a former state lawmaker, had trailed by as much as 10 points in some public opinion polls but gained ground by criticizing Murphy’s unpopular mask requirements for school children.

Both Republican candidates saw strong gains in the suburbs here from independent voters who had been turned off by Trump’s style of politics. The results in states that Biden won easily in 2020 suggest that Democrats’ razor-thin majorities in Congress are highly vulnerable in the 2022 elections.

If Republicans gain control of both, or even one, chamber of Congress, the party would win the ability to block Biden’s legislative agenda in the final two years of his term in office.

The Democratic loss in Virginia gives Trump an opportunity to portray it as a repudiation of Biden as the Republican sets the stage for another possible presidential run in 2024.

But Biden, whose approval ratings last week were at the lowest level of his presidency according to the latest Reuters/Ipsos national poll, avoided taking direct responsibility for the disappointment.

“People are upset and uncertain about a lot of things, from COVID to school to jobs to a whole range of things and the cost of a gallon of gasoline. And so if I’m able to pass and sign into law my Build Back Better initiative, I’m in a position where you’re going to see a lot of things ameliorated, quickly and swiftly.”

The top Democrats in Congress vowed to push ahead on Biden’s legislative agenda, hoping to pass twin bills worth a combined $2.75 trillion to rebuild the nation’s roads and bridges as well as bolster the social safety net and fight climate change. They have already been held up by months of infighting between progressive and moderate Democrats.

Youngkin, 54, declared victory after a campaign in which he focused on parents’ anger over schools’ handling of COVID-19, as well as teaching on race and gender issues. He walked a fine line on Trump, taking care not to alienate the former president’s hardcore base and not offering a full-throated endorsement of his false claims about widespread 2020 election fraud.

McAuliffe’s efforts to paint his rival, a former chief executive of the Carlyle Group Inc, as a Trump acolyte fell flat with voters.

“Together, we will change the trajectory of this commonwealth,” Youngkin told a rally in Chantilly, Virginia, early on Wednesday.

Republican congressional campaigns may follow Youngkin’s model of focusing on culture wars and promising to give parents more control over public schools.

Youngkin and other Republicans latched onto concerns from parents that schools are teaching left-wing ideas to combat racism, at the expense of more traditional subjects.

He vowed to ban the teaching of “critical race theory,” a legal framework that examines how racism shapes U.S. laws and policies and is linked to anti-racism concepts such as “white privilege.” Virginia school officials say critical race theory as a subject is not taught in classrooms.

Republicans also appeared to erase the Democrats’ 10-seat lead in Virginia’s House of Delegates, appearing to gain a 50-50 split or perhaps a one-seat advantage.

Virginia Republicans picked Youngkin in an unusual convention format in May, rather than by a statewide primary. That format was designed to pick a more moderate candidate, rather than one more closely allied with Trump.

Even so, Trump sought to claim credit, thanking “my BASE” in a statement for putting Youngkin over the top.

In New Jersey, Murphy, 64, ran as an unabashed liberal and became the first Democratic governor to win re-election in New Jersey in four decades.

Besides hammering Murphy over the governor’s aggressive pandemic response, Ciattarelli campaigned on cutting taxes and supporting law enforcement. In an unusual position for a Republican, he supports abortion rights, at least for the first 20 weeks of pregnancy. 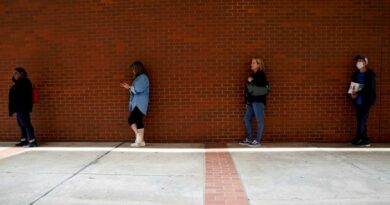 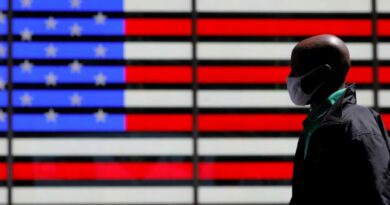