GDP grew at a 4% annualized rate in the three months through December, according to a preliminary reading from the Commerce Department. The reading was in line with the expectations of analysts surveyed by Refinitiv.

Elsewhere in the economy, initial jobless claims fell to 847,000 from an upwardly revised 914,000 the week prior. Wall Street analysts surveyed by Refinitiv were anticipating a decline to 875,000. Continuing claims fell to 4.771 million, below the 5.054 million that was expected.

Facebook Inc. announced quarterly earnings and sales hit a record in the final quarter of the year, boosted by the stay-at-home work environment caused by the COVID-19 pandemic and online holiday shopping. However, the social media giant also warned its business faces some uncertainty in the form of regulatory investigations and changes to Apple’s operating system that may impact its ad business.

Meanwhile, American Airlines Group shares took off Thursday after the airline reported a narrower quarterly loss than had been anticipated. The stock has been floated as the next possible short-squeeze candidate, following the likes of GameStop Corp.

The videogame retailer was pointing to further gains at the open after shares soared 1,642% from Jan. 12 through Wednesday as short-sellers scrambled to close their losing bets.

Shares of other companies that have seen their shares squeeze higher, including BlackBerry Ltd., Bed Bath & Beyond Inc. and AMC Entertainment, were not seeing the same strength early Wednesday.

France to press on with law on "unrepublican" behaviour 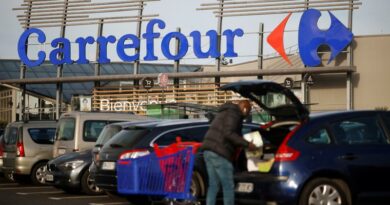