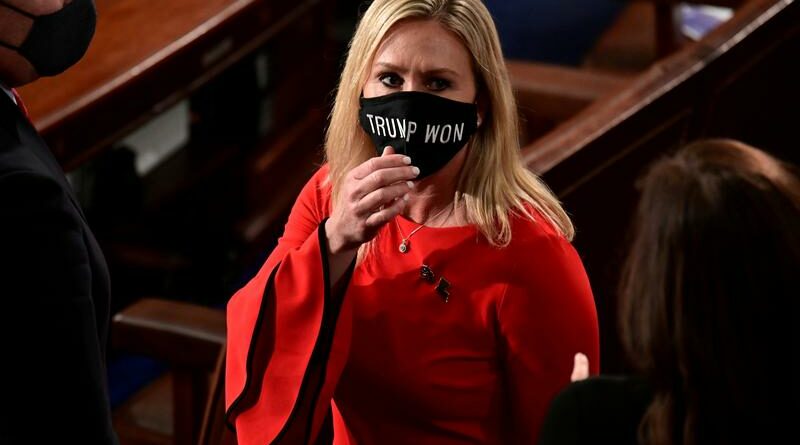 WASHINGTON (Reuters) – In the latest sign of rising tensions within the U.S. Congress, a Democratic congresswoman said on Friday she plans to relocate her Capitol Hill office for safety reasons after being “berated” by an outspoken conservative Republican congresswoman.

Democrat Cori Bush, an ordained pastor from Missouri, described confrontations with Republican Marjorie Taylor Greene of Georgia, whose office is located near Bush’s in one of the three large House of Representatives office buildings. Both are first-term House members who took office this month.

The incidents are further evidence of discord among lawmakers after a Jan. 6 riot in which supporters of Republican former President Donald Trump stormed the Capitol, interrupting the formal certification of President Joe Biden’s election victory and leading to the deaths of five people.

Bush wrote on Twitter that she is moving her office after Greene “berated me in a hallway” and “came up from behind me, loud and unmasked.” Public health experts have recommended masks to help curb the spread of COVID-19.

Greene accused Bush of “lying” about the matter and on Twitter called Bush, who is Black, “the leader of the St. Louis Black Lives Matter terrorist mob.” Greene is White.

Greene first gained national attention for her interest in the QAnon conspiracy theory that falsely claims that high-profile Democrats are part of a child pedophile ring. CNN reported that before coming to Congress, Greene had expressed support for executing Democrats, including Democratic House Speaker Nancy Pelosi.

Pelosi said on Thursday that new security measures might be needed “when the enemy is within the House of Representatives.”

House Republican Leader Kevin McCarthy has been under pressure to take action against Greene and has said he would have a “conversation” with her. A McCarthy aide has called Greene’s comments about killing Democrats “deeply disturbing.”

No. 2 House Republican Steve Scalise, who was gravely wounded in 2017 when a gunman opened fire on Republican lawmakers in Virginia, added that “there is no place for comments” like those made by Greene.

Separately, first-term Republican congresswoman Lauren Boebert was warned this month by law enforcement that she would face criminal penalties if she unlawfully carried a firearm. Boebert has vowed to carry her Glock pistol in the Capitol.

Boebert also has mocked a gun-control activist who survived a deadly 2018 school shooting in Parkland, Florida.