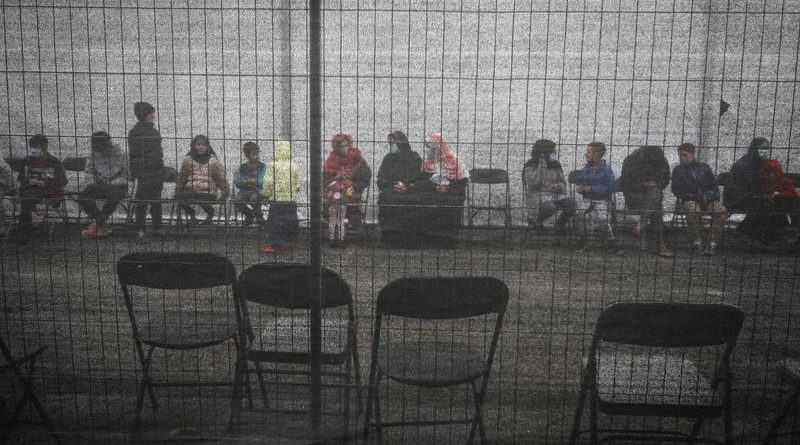 WASHINGTON (Reuters) – U.S. President Joe Biden’s administration is stopping – with a few exceptions – the temporary relocation of Afghans to the United States and focusing on reuniting immediate family members with pathways to permanent residence, according to a senior administration official.

Afghan refugees queue outside a distribution and donation center at Liberty Village on Joint Base McGuire-Dix-Lakehurst in New Jersey, U.S., December 2, 2021. REUTERS/Barbara Davidson/Pool

The policy revision follows criticism by some lawmakers, refugee organizations and veterans groups that the administration failed to properly plan the evacuation of Afghans at risk of Taliban retribution when it pulled the last U.S. troops out of Afghanistan a year ago.

The administration says the evacuation – marred by chaos at Kabul airport and a suicide bombing that killed 13 U.S. service members and more than 170 Afghans – was a success, with nearly 90,000 Afghans resettled in the United States in one of the largest operations of its kind.

The administration’s “commitment to our Afghan allies is enduring,” the senior administration official said while briefing reporters on Wednesday on changes to the relocation policy. “This commitment does not have an end date.”

Under the changes, the official said, the United State will stop – with a few exceptions – admitting Afghans on humanitarian parole, a special program that grants temporary entry but no pathway to lawful permanent residence.

The revised policy, the official said, will focus on relocating to the United States immediate family members of U.S. citizens, green card holders and Afghans with Special Immigration Visas (SIVs) granted to those at risk of Taliban retaliation because they worked for the U.S. government.

Family members admitted from those categories will have “durable, long-term immigration status,” allowing them to “more quickly settle and integrate into their new communities,” the official said.

“We know family reunification remains a really high priority for Afghans themselves and for the communities who care about them and for advocates across the country, veterans groups as well,” said the official. “It is for us, too.”

The revised policy follows months of talks between the administration and the AfghanEvac coalition of groups that help evacuate and resettle Afghans in the United States.