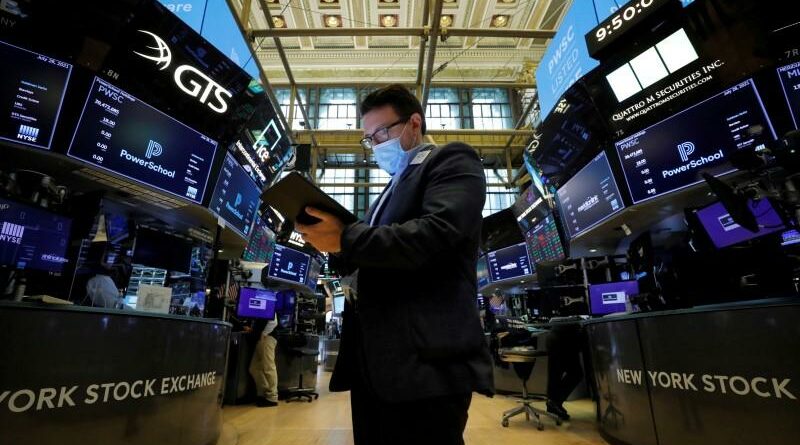 The dollar also scaled a four-month high versus the euro as investors looked ahead to U.S. inflation numbers on Wednesday for indications of when the world’s largest economy may start to withdraw stimulus.

MSCI’s gauge of stocks across the globe gained 0.20%.

European shares pushed to fresh record highs, with the STOXX 600 extending its gains to a seventh straight session, boosted by travel and leisure companies.

The U.S. Senate has set a vote on passage of the $1 trillion bipartisan infrastructure bill for 11 a.m. ET (1500 GMT), after which it would immediately begin to debate $3.5 trillion in additional investments.

Activity, meanwhile, was heating up in bond markets.

Indications in recent days of an improving labor market have prompted investors to rethink the outlook for U.S. monetary policy, halting recent sharp falls in both U.S. and European bond yields.

U.S. 10-year Treasury yields scaled their highest in over three weeks, rising as high as 1.336% in London trade and extending the longest run of gains since early February.

Adding fuel to the debate, two Fed officials said on Monday that while the labor market still has room for improvement, inflation is already at a level that could satisfy one leg of a key test for the beginning of interest rate hikes.

Data on Monday showed that U.S. job openings shot up to a fresh record high in June and hiring also increased.

While signs of economic recovery in the United States are reviving reflation trade bets, investors remain wary of the lingering risks posed by COVID-19.

China on Monday reported more COVID-19 infections in what seems to be its most severe resurgence of the disease since mid-2020, as some cities added rounds of mass testing in a bid to stamp out infections.

MSCI’s broadest index of Asia-Pacific shares outside Japan added 0.4% after trading much of the day in the red as worries weighed about the spread of the Delta variant.

With tapering expectations gaining traction, the dollar extended its gains made on Friday and Monday.

Oil prices rose, recouping some of the losses in the previous session when prices hit a three-week low. [O/R]

Google's challenge to game consoles to kick off in November

Kyle Bass: China's currency would collapse 30% to 40% if they stopped supporting it