JERUSALEM, July 5 (Reuters) – The Bank of Israel held its benchmark interest rate at 0.1% for a 10th straight policy meeting on Monday, citing risks to the economic recovery from the emerging Delta variant in the COVID-19 pandemic.

Inflation has begun to climb in Israel but, as with other central banks, policymakers have said it is difficult to determine whether the rise is transitory and pandemic concerns remain.

While Israel’s economy is largely open amid a steep drop in virus infections, the number of cases has gradually risen in recent weeks.

“At this stage, the morbidity level is low, but the spread of the disease poses some risk to the continued recovery of the economy,” the central bank said in a statement, largely referring to the labour market.

“The (monetary) committee will therefore continue to conduct a very accommodative monetary policy for a prolonged time.”

All 16 economists polled by Reuters had said they expected the monetary policy committee to keep rates steady after doing so ever since cutting them from 0.25% more than a year ago.

With the next rate move widely expected to be an increase in 2022 or 2023, analysts had sought more clarity from the Bank of Israel on its quantitative easing (QE) programmes. The central bank is some 20 billion shekels shy of a planned ceiling of 85 billion shekels ($26 billion) in government bond purchases that have stabilized bond yields.

Bank of Israel Governor Amir Yaron said that given the current rate of purchase, the programme is expected to end towards the end of the year.

“Closer to that period we will announce our steps, and they will of course be conditioned on market conditions at the time,” he told a news conference.

The central bank has also bought $22 billion of foreign currency over the first five months of 2021 out of a planned $30 billion in a bid to contain a strong shekel.

Yaron said “we are certainly not limited to a maximum intervention of $30 billion for this year — when the program ends,” and the bank will continue to act in the forex market as needed and taking economic activity into account.

The shekel was flat at 3.26 per dollar in late trading.

The Bank of Israel said, though, it would end a programme that provides long-term loans to the banking system against credit extended to small businesses by Oct 1. 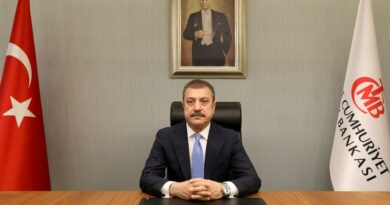 Turkey inflation above 16% in test for new central bank chief