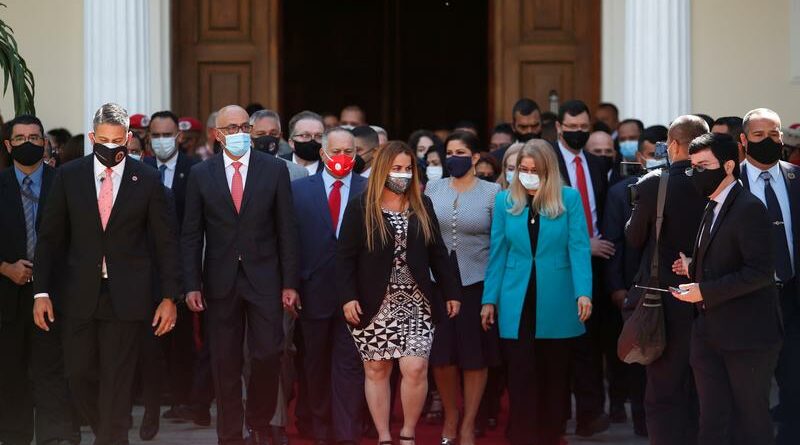 CARACAS (Reuters) – Venezuela’s ruling Socialist Party on Tuesday inaugurated a parliament controlled by allies of President Nicolas Maduro, while the opposition convened a rival committee of legislators in a virtual session, following disputed elections on Dec. 6.

The opposition, led by speaker Juan Guaido, had boycotted the vote, widely considered fraudulent by Maduro adversaries and many Western countries. On Dec. 26, the opposition-controlled parliament approved a statute extending its term into 2021.

But it was Socialist Party lawmakers and allies who physically occupied the legislative palace on Tuesday, walking towards it from a nearby plaza, carrying photos of late President Hugo Chavez and founding father Simon Bolivar.

The shift marks a formal consolidation of power for Maduro, who in early 2019 looked vulnerable as the United States and dozens of other countries recognized Guaido as Venezuela’s rightful leader.

“You are examples for the world of how democracy should be exercised,” said Jorge Rodriguez, former information minister, who was named president of the new Socialist Party-run National Assembly and swore in 227 lawmakers. “We are here by constitutional mandate.”

Security forces blocked off nearby roads.

The ceremony marked the symbolic end of the opposition’s five-year struggle to weaken Maduro after it won a 2015 landslide victory in parliamentary elections.

But control of parliament will give Maduro’s allies little capacity to improve a crippled economy hemmed in by U.S. sanctions. And the pro-government supreme court had in any case for years hamstrung opposition legislators by shooting down every one of their measures.

“I am not aware of the assembly, I am working to solve my problems,” said Maria Rojas, 49, who works in the Caracas mayor’s office. “God is the only one who can solve the situation.”

The outgoing administration of U.S. President Donald Trump has recognized the Venezuelan opposition’s extension of its own term.

“President Guaido and the National Assembly are the only democratic representatives of the Venezuelan people as recognized by the international community,” U.S. Secretary of State Mike Pompeo said in a statement on Tuesday.

“They should be freed from Maduro’s harassment, threats, persecution, and other abuses.”

Lima Group, a regional bloc comprised mostly of Latin American nations, said on Tuesday it does not “recognize the legitimacy or legality of the National Assembly installed on January 5” in Venezuela, describing the Dec. 6 elections as “fraudulent”.

Other international supporters of Guaido, including the European Union, have yet to say if they agree if the opposition still rightfully controls parliament.

The move has generated rifts within Guaido’s coalition, with one major opposition party abstaining from the vote on the extension and several individual lawmakers announcing they would stop serving as legislators after Jan. 5.

Over the past year, public approval for Guaido has fallen, while Maduro retains some popular support.

The looming inauguration of U.S. President-elect Joe Biden on Jan. 20, after years of escalating U.S. sanctions and diplomatic pressure on Maduro under Trump, represents another uncertainty for Guaido.

Biden has repeatedly labeled Maduro a dictator and has said he would work with other countries to seek free and fair elections in Venezuela but has not laid out details of policies he plans to implement toward the oil-rich nation.

A representative of Biden’s team did not immediately reply on Monday when asked if his administration would continue recognizing Guaido as the head of parliament.

Maduro calls Guaido a U.S.-backed puppet seeking to oust him in a coup. He has said the Dec. 6 elections had the same electoral conditions as the 2015 vote won by the opposition.

Maduro, who retains the support of the armed forces and allies like Cuba, Russia and Iran, helped push opposition lawmakers out of the congressional headquarters and forced dozens of legislators into exile.

Guaido has vowed a “diplomatic offensive” to ensure as many countries as possible refuse to recognize the legitimacy of the socialist-held congress and called on supporters to take to the streets.

“The dictatorship bet that we were going to leave the country and the answer is simple, here we are, here is the National Assembly defending the constitution,” Guaido said in Tuesday’s virtual session.

'Castles built on sand': Famed economist David Rosenberg says investors are being too reckless as stocks rally — and warns that a vicious long-term bear market is far from over