Home » Politics » Amtrak in the infrastructure bill: $66 billion in new funding, and an adjusted mandate. 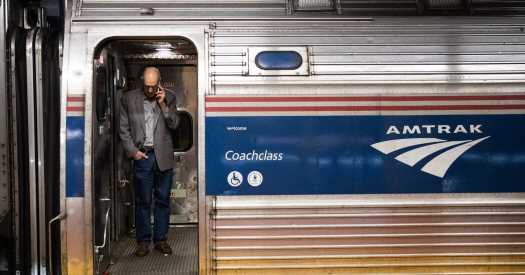 President Biden frequently mentions his fondness for Amtrak, which began in the 1970s, when he would travel home from Washington to Delaware every night to care for his two sons after his wife and infant daughter were killed in a car crash. Mr. Biden, who took an estimated 8,000 round trips on the line, has pledged to inject billions in rail.

Rail advocates say he is now taking steps to fulfill some of those promises.

The bipartisan infrastructure bill includes $66 billion in new funding for rail to address Amtrak’s maintenance backlog, along with upgrading the high-traffic Northeast Corridor from Washington to Boston. It also proposes several changes to the legal mission of Amtrak, which rail experts hailed as a win for passenger rail.

The bill includes new language that would change Amtrak’s goal to “meet the intercity passenger rail needs of the United States” rather than achieving “a performance level sufficient to justify expending public money.” It would also add language that prioritizes service in rural areas in addition to urban ones.

“That is a really significant change because implicit in that is that we’re not trying to make Amtrak into a profit-making venture,” said Jim Mathews, the chief executive of the Rail Passengers Association. “We’re using it to create services that are needed by the taxpayers of the country.”

Amtrak has lost money since it was created in 1971 by Congress to be the nation’s rail operator. Federal subsidies and payments from states have allowed the agency to remain in service, and it has become an integral mode of transportation in the Northeast and Southern California. Its profitability has long been a source of conflict among lawmakers in Washington.

The new funding would be the largest investment in passenger rail since Amtrak was created, according to the administration. It comes as the agency tries to significantly expand its map nationwide by 2035 to provide more service outside of the Northeast and mid-Atlantic.

Although John Robert Smith, a former board chairman for Amtrak, said he preferred the higher level of funding for Amtrak in the House’s version of the bill, he said he was pleased to see senators make an effort to address Amtrak’s maintenance backlog.

“I certainly like the funding levels in the House bill, but I do have to say that this Senate bill is still more substantial than what has ever been invested in passenger rail and the policy is good,” Mr. Smith said.

Public buses, subways and trains are also set to receive $39 billion in new funding under the bill, which would be used to repair and replace aging infrastructure and expand transit service across the country. The Biden administration said it would be the largest federal investment in public transit in history.

Still, transit experts said they were disappointed in the amount of funding after it was scaled back by $10 billion from a June proposal.

“It’s a major step in the right direction to be applauded, but losing $10 billion,” said Paul P. Skoutelas, the chief executive of the American Public Transportation Association, a lobbying group. “That could have been extraordinarily helpful to continue this effort to modernize the industry.”

Although Mr. Skoutelas said the funding was a good start, he said it would not be enough to address the swelling maintenance backlog. According to a report from the American Society of Civil Engineers, there is a $176 billion backlog for transit investments.

Some moderate Democrats expected to defect when full House votes on impeachment: reports