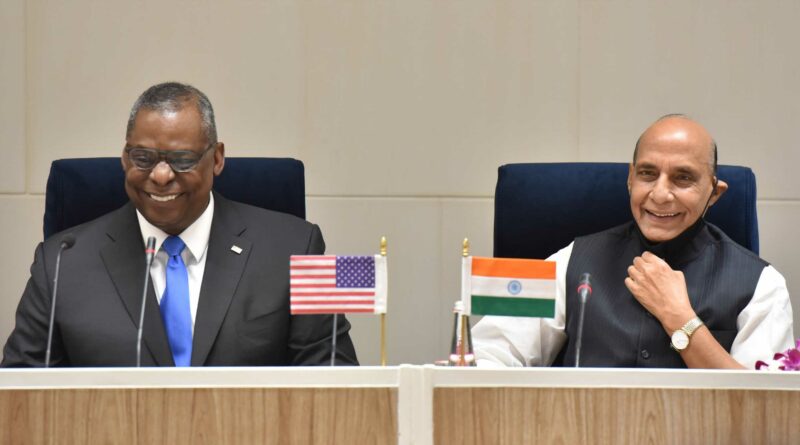 The United States sees India as one of its most important partners in dealing with China's growing ambitions in the Indian Ocean region and the Biden administration has demonstrated that early on, experts told CNBC on Monday.

"It's important that the secretary of Defense has made a trip to India on his first trip to Asia, along with Japan and South Korea," Dhruva Jaishankar, executive director at think tank Observer Research Foundation America, said on CNBC's "Squawk Box Asia."

Jaishankar also said the Biden administration's investment in the Quad — the informal strategic alliance between the U.S., India, Australia and Japan — is equally important.

China's presence in the Indian Ocean

Beijing has significantly expanded its engagements in the Indian Ocean over the last three decades and has been especially active since 2008. A Brookings Institution report last June said American and Indian strategists are worried about China's growing naval presence as well as its use of "debt-trap diplomacy," which could provide Beijing with military advantages.

China set up its first overseas military base in Djibouti in the Horn of Africa in 2017 and has invested in developing, managing or acquiring strategically located ports in countries surrounding India, including Pakistan, Sri Lanka and Myanmar.

"There is a growing Chinese presence in the Indian Ocean region," said Arun Singh, a former Indian ambassador to the United States. He told CNBC's "Street Signs Asia" on Monday, "India has to work to safeguard its interests and security. So, the way they're doing that is one, building up its own naval capacity and then building up partnerships with other countries."

India's navy has also increased its patrols over the last few years as New Delhi has taken a much more activist approach to humanitarian assistance and disaster relief across the Indian Ocean region, according to ORFA's Jaishankar.

As China and India more frequently bicker over the area, there is bound to be some natural convergence between New Delhi and Washington, he said. While it is not as significant as its presence in the Pacific Ocean, the United States does have a permanent presence in the Indian Ocean region through military bases in the Middle East, Djibouti and Diego Garcia island, which is part of the British Indian Ocean Territory, Jaishankar explained.

The U.S.-India relationship has developed in "significant leaps and bounds" over past years, in part driven by shared concerns about China, according to Jaishankar.

"We are at a stage where, while they are not allies, the U.S. and India conduct a significant number of military exercises between themselves and with other partners involving all three military services," he said. That includes a trilateral naval exercise between the U.S., Japan and India called the Malabar games. Last year, New Delhi also invited Australia to participate.

Under the Trump administration, the U.S. last year also signed an agreement that grants New Delhi access to U.S. satellite data crucial for targeting missiles and other military assets. It was the last of four foundational defense agreements that the U.S. typically signs with close allies which allow for the exchange of sensitive and classified information.

The U.S. is also becoming a major supplier of military equipment to India, behind Russia. Recent reports said that India intends to buy 30 armed drones from the U.S. to step up sea and land defenses as tensions with China and Pakistan persist.

But the India-Russia relationship could potentially get in the way of closer ties between New Delhi and Washington. Reuters reported India is set to acquire Russian S-400 air defense systems that could potentially subject the country to U.S. sanctions under a 2017 American law aimed at deterring countries from buying Russian military hardware. Under the new administration, the U.S. has told India it is unlikely to get a waiver on the planned S-400 purchase, the news wire reported in January.

Former ambassador Singh told CNBC that even with India stepping up its purchases of military equipment from the U.S. in recent years, a majority of its defense inventory is still of Russian origin. So, the expectation in New Delhi would be that the U.S. will understand those compulsions and refrain from giving Indian policymakers the impression that Washington is not a reliable partner.

"It is important for the U.S. to signal to people in India that it is there as a long-term partner, as a reliable partner, and therefore in its own interest, I think the U.S. should not take any steps to sanction India, related to S-400," Singh said.

"In the framework for China, U.S. sees India as a very important partner. I think that would be, aside from the strengths in the bilateral relationship, the defining parameter for the relationship going ahead," the former ambassador added.