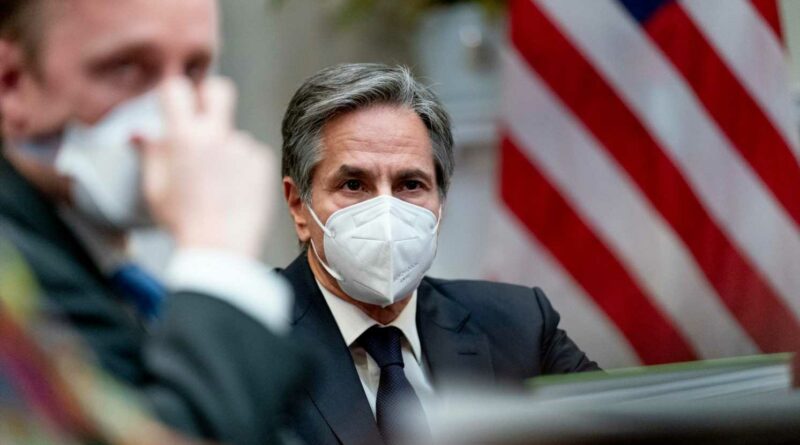 WASHINGTON – President Joe Biden’s top national security advisers will meet with Chinese diplomats on Thursday in a high-stakes showdown that could determine whether Washington and Beijing are headed for a “new Cold War” or a diplomatic thaw.

The Biden administration has signaled it will take a hard line when the two sides sit down behind closed doors in Anchorage, Ala., for their first meeting. Secretary of State Antony Blinken and Jake Sullivan, Biden’s national security adviser, will lead the talks with their Chinese counterparts.

On the agenda: China’s mass internment of Uyghur Muslims, its crackdown on democracy activists in Hong Kong, its escalating aggression toward Taiwan and its trade coercion against Australia.

Blinken and Sullivan will be “very, very blunt” about the Biden administration’s “long list of concerns,” said a senior administration official, who briefed reporters on the condition of anonymity. “We don’t want them to be operating under illusions about our tough-minded approach to their very problematic behavior.”

Former President Donald Trump veered between attacking China and touting his “great relationship” with Xi Jinping, but even that personal rapport disintegrated with the emergence of the COVID-19 pandemic.

“It has become clear that the U.S. and China have conflicts of interest that cannot be solved but must be managed,” said Bonnie Glaser, director of the China Power Project at the Center for Strategic and International Studies, a Washington think tank.

“We don’t want a hot war, and we don’t want a cold war,” Glaser said. The Alaska meeting is an “important potential turning point” that could set the tone for U.S.-China relations for years to come, she added.

“China today is challenging the United States and destabilizing the international community across every dimension of power – political, diplomatic, economic, innovation, military, and even cultural – and with an alternative and deeply disturbing model for global governance,” Sen. Bob Menendez, chairman of the Senate Foreign Relations Committee, said at a hearing Wednesday. “We need to be clear-eyed and sober about Beijing’s intentions and actions.”

Chinese officials, meanwhile, are spinning Thursday’s meeting as an opportunity to reset relations after the contentious Trump years.

“We hope that, through this dialogue, the two sides can … focus on cooperation, manage differences and bring China-U.S. relations back to the right track,” Zhao Lijian, a spokesman for China’s foreign ministry, said at a news conference on Wednesday. But he warned U.S. officials against poisoning the talks with threats and diplomatic pressure.

How much the U.S. can do to change Beijing’s course remains unclear, and White House officials said they do not expect any breakthroughs – or even baby steps – in this first session.

“I’m not very confident that we’re going to be able to persuade the Chinese of the error of their ways and the righteousness of ours just over the course of a couple of hours’ worth of talks,” the administration official said.

Here’s a look at three of the most contentious issues the two sides will discuss on Thursday:

The Biden administration has said China’s treatment of the Uyghurs, a predominantly Muslim ethnic group in the Xinjiang region, amounts to genocide. Xi’s government has detained more than 1 million Uyghurs and other ethnic minorities in “re-education” and labor camps in northwestern China. The BBC has reported that women in the camps have been subjected to systematic rape, sexual abuse and torture.

Chinese officials flatly deny the accusations, casting the Uyghurs as a terrorist threat and arguing the camps are “re-education” centers. They have warned the U.S. and other countries against meddling in what they portray as an internal Chinese matter.

On Wednesday, the Biden administration responded by sanctioning 24 Chinese and Hong Kong officials, virtually ensuring this will be a fresh flashpoint in Thursday’s face-to-face talks.

Zhao slammed the new U.S. sanctions as a “severe violation of international law … and grave interference in China’s internal affairs.” He called it a “vicious attempt of the U.S. to interfere in China’s domestic affairs.”

On Tuesday, a key Biden adviser on Indo-Pacific issues, Kurt Campbell, said the U.S. would not be able to improve relations with China until ended its economic boycott against Australia.

At issue is China’s retaliatory trade blockade of key Australian exports, including some wine, beef and timber products. Beijing imposed the restrictions after Australia’s prime minister called for an independent inquiry into the origins of the coronavirus.

“We are fully aware of what’s going on and we are not prepared to take substantial steps to improve relations until those policies are addressed and a more normal interplay between Canberra and Beijing is established,” Campbell told the The Sydney Morning Herald.

Campbell’s declaration was intended to show new unity between the U.S. and its allies and highlight the possibility of multilateral cooperation to pressure China on key issues.

Indeed, Thursday’s meeting comes after a blizzard of diplomacy with key allies in the Indo-Pacific. First, Biden convened a virtual summit with the leaders of Japan, India and Australia. He then dispatched Blinken and Pentagon Chief Lloyd Austin to visit Japan and South Korea in a show of diplomatic unity ahead of the U.S.-China meeting.

“The biggest failure of the Trump administration was trying to do everything unilaterally,” and the Biden administration is seeking to shift course, Glaser said.

Thursday will offer the first glimpse of whether the new administration will have any more success in confronting or containing China than the previous one, she said.

Coronavirus Health Official Warns People Not To Touch Their Mouths, Then Licks Her Hand