AUKUS: 'Brexit has made us less safe' says Mike Buckley

The European Union wants to resolve the trading difficulties of Northern Ireland by the end of the year, the EU’s post-Brexit coordinator said on Tuesday, while warning London against unilaterally suspending the terms of the divorce deal.

However, he said wanted to find solutions within the protocol to free up the movement of goods to the British province.

“This process cannot be eternal and therefore I think we should do our utmost to resolve all outstanding issues before the end of the year, so that’s the timeframe within which we work,” Sefcovic told reporters after a meeting with national EU ministers in Brussels.

He said the bloc wanted to focus on the practical problems faced by people and businesses in Northern Ireland.

Under the protocol, Britain agreed to leave some EU rules in place in Northern Ireland and accept checks on goods arriving from elsewhere in the United Kingdom, in order to preserve an open land border with EU member state Ireland.

However, the arrangement has effectively placed a border in the Irish Sea, angering pro-British unionists who believe it divides them from the rest of the United Kingdom.

Mr Sefcovic’s British counterpart David Frost has raised the prospect of triggering Article 16 of the protocol, which allows either side to dispense with its terms if they are proving unexpectedly harmful.

Mr Sefcovic said it would be “extremely unhelpful” if Britain did so, adding that the European Union would then look into all options in response.

“But, as I said, we definitely hope that we would avoid that scenario because I think that, first and foremost, the best outcome for the people in Northern Ireland would be a solution and not further tensions or confrontations,” he said.

The UK is pushing for changes to the protocol which was agreed to prevent a hard border between the Republic of Ireland and Northern Ireland after Brexit.

In addition, the Government wants to see the removal of the European Court of Justice over Northern Ireland goods trade and an “honesty box” system for goods travelling across the Irish Border.

As it stands officials claim the protocol has caused issues for trade across the Irish Sea – garnering criticism from impacted entities.

London said trade disruption resulting from the protocol has already breached the threshold to trigger Article 16.

But so far the nation has refrained from officially triggering the nuclear option while negotiations with Brussels are ongoing.

Lord Frost said there was “ample justification” for the UK triggering Article 16, however.

Speaking to the House of Lords on Monday, September 13, he said: “They would be making a significant mistake if they thought that we were not ready to use the Article 16 safeguards if that were to be the only apparent way forward to deal with the situation in front of us.

“If we are to avoid Article 16, there must be a real negotiation between us and the EU.”

In response, Germany’s ambassador to the UK Andreas Michaelis said: “Seems we are entering a new phase with regard to the Northern Ireland Protocol.

“Just as the EU becomes more pragmatic and understanding the UK adopts a less flexible line. Call that joint implementation.”

The EU has ruled out reopening negotiations for this deal but has said it is open to finding solutions which will ease its implementation. 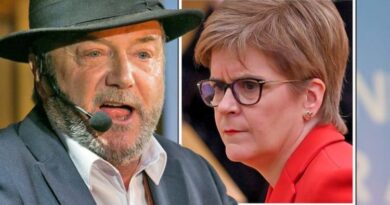