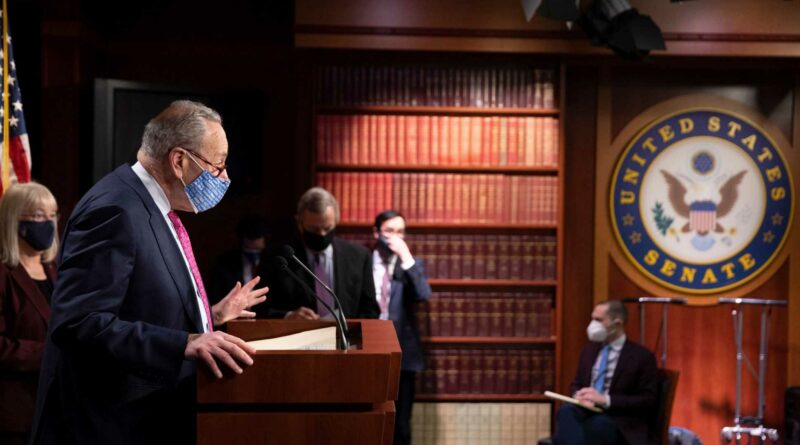 WASHINGTON ― Democrats on Capitol Hill are preparing to push through a large coronavirus relief package ― without Republican support, if necessary ― in order to confront what they’re calling a historic health and economic crisis in America.

“Only big, bold action is called for,” Senate Majority Leader Chuck Schumer (D-N.Y.) said in a floor speech on Thursday, pledging to “move forward” and pass a bill even if Republicans object to the measure.

Democrats can muscle through spending legislation with only 51 votes in the Senate through a special procedure called budget reconciliation ― the same procedure that Republicans utilized several times over the past two decades to advance their agenda, including to enact broad tax cuts in 2017.

President Joe Biden has proposed a sprawling $1.9 trillion relief bill that would send $1,400 checks to most Americans, extend federal unemployment benefits through September and increase funding for vaccine distribution ― as well as enacting a lot of other economic policies, such as raising the minimum wage, that Republicans feel are irrelevant to the pandemic.

After Democratic senators huddled with White House economic advisers on a conference call Thursday, lawmakers seemed to emerge with a consensus on moving ahead along the lines of Biden’s original proposal, which incorporates a lot of policies that congressional Democrats previously endorsed.

“We will continue to reach out to Republicans but I’m a big supporter of having an insurance policy. … The way things are looking now, I think we’re going to need an insurance policy,” said Sen. Chris Van Hollen (D-Md.), referring to budget reconciliation.

Republicans, meanwhile, are upset that Biden is pushing forward a large COVID-19 package so soon after Congress appropriated $900 billion for coronavirus relief in December. They also argue that doing so via budget reconciliation flies in the face of the president’s call for unity in his inaugural speech earlier this month. On Inauguration Day, Biden urged the nation to temper its political discourse and come together to reject extremism and white supremacy in the wake of Donald Trump’s disastrous presidency. He didn’t say Democrats would not do things they campaigned on.

One Republican senator who spoke on the condition of anonymity expressed disappointment with Biden for not reeling back his party and coming down from his ask of $1.9 trillion for COVID-19 relief, warning that sticking to the Democrats’ current demands would poison the well for cooperation in the Senate.

“It would be like declaring war around here. And you’ve got impeachment on top of it,” the GOP senator said Thursday. “This is not a good way to start off.”

“I can guarantee you, no one back home cares. They just want their relief,” added Sen. Brian Schatz (D-Hawaii).

Bipartisanship matters more in the Senate than the House because Democrats hold only 50 seats and Senate rules effectively require 60 votes for most legislation to pass. But Democrats can use the budget reconciliation process to pass legislation with only 51 votes, including the tie-breaker from Vice President Kamala Harris. The procedure is part of the annual budget process and can be used once per fiscal year, and only for measures that affect spending and revenue. (It’s not clear, for instance, if Democrats could change the minimum wage through reconciliation.)

Sen. Joe Manchin (D-W.Va.) was coy about his support for budget reconciliation when asked by reporters on Thursday.

The White House has indicated it wants Congress to pass a relief package by March, when federal unemployment benefits for 11 million workers will begin to expire. The Senate also has to contend with confirming Biden’s Cabinet nominees and trying Trump for inciting the deadly Capitol riot on Jan. 6.

Lawmakers have floated the idea of passing a small bill with relief checks and vaccine money, then passing a bigger bill later, but White House press secretary Jen Psaki rejected that idea on Thursday, saying “we aren’t looking to split a package in two.”

“Republicans can still vote for a package even if it goes through reconciliation,” Psaki added.

Speaker Nancy Pelosi (D-Calif.) said that next week the House would advance budget legislation that lays the groundwork for using the reconciliation process, which she held out as an option Democrats would use only with great reluctance.

“We’ll pass a reconciliation bill if we need it,” Pelosi said. “We would hope that we would have bipartisan cooperation to meet the needs of the American people.”

Divided Court Hears Trump Emoluments Case: ‘We Are Up Here Winging It’