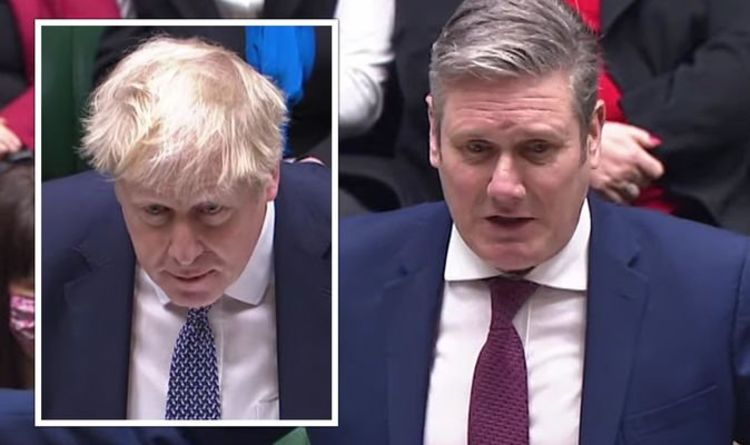 The House of Commons erupted as Sir Keir Starmer levelled a devastating blow at Mr Johnson who took to the dispatch box to say he was “sorry” for attending a Downing Street garden bash for “two minutes” before going back to work on May 20, 2020.

In a grovelling apology at the start of Prime Minister’s Questions, Mr Johnson told MPs: “I want to apologise. I know that lots of people across this country have made sacrifices…

“I know the rage they feel with me and the Government I lead when they think in Downing Street itself the rules are not being followed.”

He claimed that while “I cannot anticipate the conclusion of the current inquiry” he has “learned enough to know there were things we did not get right and I must take responsibility.”

The Prime Minister then admitted that he was present at the party, revealing: “No 10 is a big department with a garden as an extension of the office which has been in constant use because of the role of fresh air in stopping the virus.

JUST IN PMQs LIVE: Boris sparks rage he apologises and admits he was in the garden – ‘RESIGN!’

“When I went into that garden on May 20 to thank groups of staff before going back into my office 2 minutes later to continue working.”

And in a comment which sparked uproar in the Commons he said “I believed this was a work event” adding “with hindsight I should have sent everyone back inside, I should have found another way to thank them.”

But Sir Keir was having none of it, as he hammered: “Well there we have it!

“After months of deceit and deception, the pathetic spectacle of a man who has run out of road!

PMQs: Boris Johnson apologises for party on May 20th

“His defence that he didn’t realise he was at a party is so ridiculous that it is actually offensive to the British public!”

He addded: “He has finally admitted to what everyone knew!

“That when the whole country was locked down, he was hosting boozy parties in Downing Street.

“Is he now going to do the decent thing and resign!?”