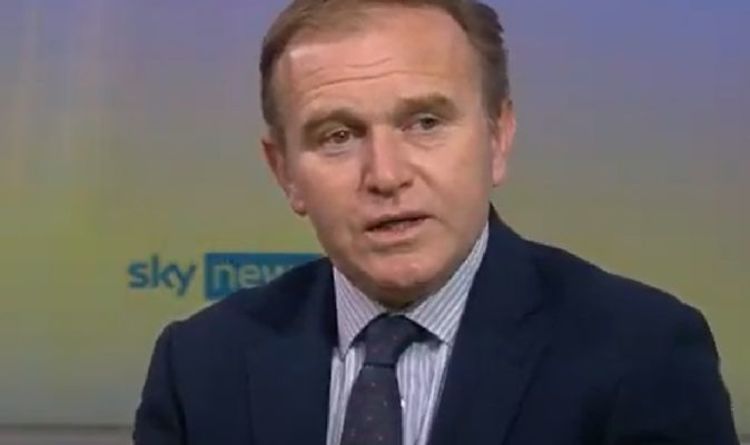 Environment Secretary George Eustice has been grilled over French fishing licences amid concern of a “trade war” from BBC Radio 4 host Nick Robinson. The Today programme presenter pressed the Tory Minister on how far the Government was willing to risk a wider economic conflict with France over what is “a very, very small part of the British economy.” It comes amid an escalating war of words between Paris and London over fishing arrangements in the English Channel following Brexit.

Mr Robinson told the Environment Secretary: “Let’s be frank fishing is a very, very small part of the British economy.

“But trade that goes through the Channel Tunnel, trade that comes across the ferries and through the port of Dover is a massive part of the British economy.

“Is the Prime Minister is the Chancellor saying to you get this sorted?

“Because otherwise, the economic consequences could be huge.”

JUST IN: Sturgeon ‘angering’ own SNP members on independence

Mr Eustace told the BBC presenter: “Well, we’ve have got it sorted in that we’ve been issuing licences in accordance with a trading cooperation agreement and you’ll recall that our own fishing industry felt that we’ve granted access that was a bit too generous to the European Union.

“I’d hoped that we would get more quota and we got a 25 percent uplift in quota.

“We granted the EU access to our waters for those vessels that had a track record of accessing the six to 12-mile zone.

“We’ve issued all of those licences to those vessels that are entitled to it in good faith.”

Mr Robinson interrupted: “But Mr Eustace there are people at the moment having to take in the fact that we live in an extremely high tax economy, that we have extremely high inflation, that growth is forecast to be very low.

“If there is an effect a trade war because of a dispute about what a couple of dozen fishing trawler licences, people might get very impatient indeed.”

The Environment Minister replied: “Well, what we’ve been saying throughout this is that if France and the EU want to offer data on those vessels that they’ve been unable to so far, we’ll consider it.

“But we’ve issued licences to everyone that’s entitled to them, that’s 98% of them.”

“It’s quite obvious that France is facing an election and the President isn’t doing too well, and I’m afraid it goes with the territory that you then immediately try and pull the tail of the lion across the water, which is the UK,” he told Sky News.

“So first of all, a lot of this is window dressing and nonsense from France.”

The NRA Is A Crashed Car On Fire, Ready To Explode