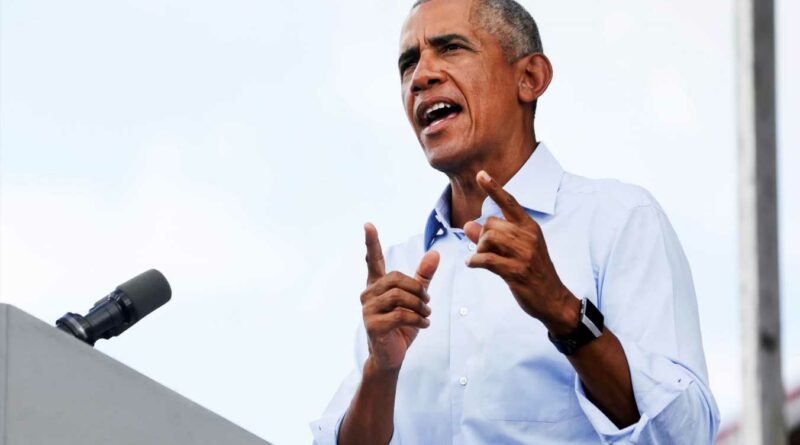 WASHINGTON — Former President Barack Obama on Friday issued a formal statement on Afghanistan, his first since the U.S. military entered the final stages of its withdrawal from the country two weeks ago.

Obama said he and former first lady Michelle Obama "were heartbroken to hear about the terrorist attack outside the Kabul airport that killed and wounded so many U.S. service members, as well as Afghan men, women, and children."

"As president, nothing was more painful than grieving with the loved ones of Americans who gave their lives serving our country," he said.

Obama continued: "As President Biden said, these service members are heroes who have been engaged in a dangerous, selfless mission to save the lives of others."

This line served as a rhetorical nod to Obama's former vice president, essentially acknowledging that Biden is in charge now.

"We're also thinking of the families of the Afghans who died, many of whom stood by America and were willing to risk everything for a chance at a better life," Obama said.

Obama is the last of the four U.S. presidents who presided over America's 20-year war in Afghanistan to speak out about the situation.

He is also the president who ordered an additional 30,000 American troops into the country in late 2009, a decision that his then vice president, Biden, strongly opposed.

At the time, Obama was convinced that U.S. firepower could prop up Afghanistan's fragile, corrupt post-Taliban government.

Eleven years later, that government collapsed in a matter of hours as the Taliban retook Kabul on Aug. 14 without firing a single shot.

Obama did not mention the overall evacuation effort in his statement Friday. But earlier this year, he said he strongly supported Biden's decision to wind down America's longest war.

"After nearly two decades of putting our troops in harm's way, it is time to recognize that we have accomplished all that we can militarily, and that it's time to bring our remaining troops home," Obama said on Apr. 14.

The two Republicans who presided over the war, George W. Bush and Donald Trump, have both openly disagreed with Biden's decision to withdraw American troops — albeit in different ways.

Bush, who launched the war soon after the terrorist attacks of Sept. 11, 2001, has said he fears for the women and girls of the country, who face near-certain repression under the Taliban's fundamentalist interpretation of Islamic law.

Bush also painted a grim picture in July of what awaited those Afghans who had worked for the U.S.-led coalition over the past two decades.

"I think about all the interpreters and people that helped not only U.S. troops, but NATO troops and they're just, it seems like they're just going to be left behind to be slaughtered by these very brutal people, and it breaks my heart," Bush told the German state broadcaster Deutsche Welle.

Trump has taken a different route, issuing a series of statements in recent weeks that distorted his own record and falsely accused Biden of removing American troops before U.S. civilians. Trump has also sought to paint refugees evacuated from Afghanistan as "terrorists."

Gutfeld on Oberlin College losing $11 million to a bakery