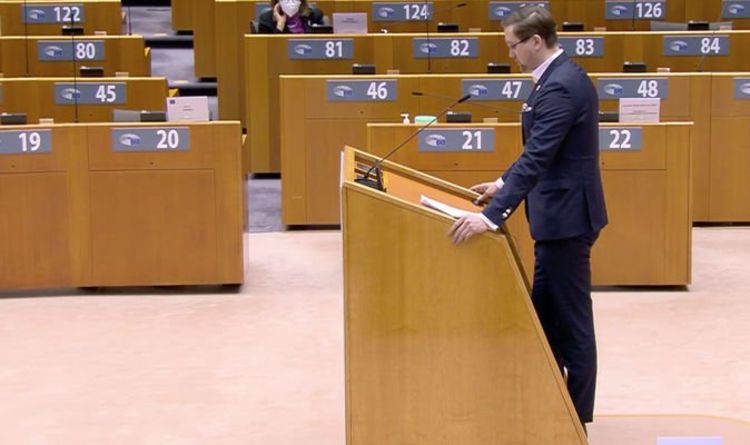 Eurosceptic MEP Jaak Madison mocked the Commission President for leaving the chamber briefly while she was being grilled on the bloc’s slow roll-out of Covid jabs. The Estonian, of the Identity and Democracy group, laughed as he stepped up at the podium for his opportunity to take Brussels to task. “Unfortunately, Madame von der Leyen has already left the chamber,” he said in disbelief.

Video footage from the debate shows the Commission President’s chair left empty while her health chief, Stella Kriakides, was left to watch on.

Continuing his address, Mr Madison said the bloc needed to address the reasons why its vaccine scheme had fallen behind Britain’s.

“The EU has often wanted to see itself as a powerful federation compare to other world powers,” he added. 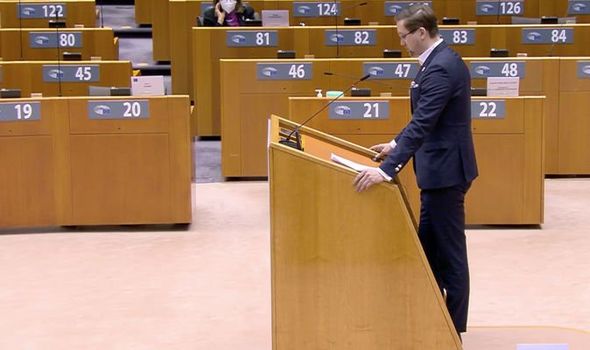 “However, given this competence and confusion, it is an over-regulation organism imbued with bureaucracy. It is absolutely unable to deal with crisis.

“I’ve often heard how countries are unable to deal with crisis on their own, and that’s why we must all rely on the EU.

“The fact that the European Commission has been given a mandate to pursue vaccines will cause even greater economic damage to member states.”

Mrs von der Leyen later returned to her seat in the European Parliament before delivering her closing address in the debate.

In her opening statement, the Commission chief defended the bloc’s sluggish delivery of jabs to member states.

She claimed Brussels had prioritised health and safety tests on vaccines, while other countries had opted to risk the health of their citizens by cutting corners

Mrs von der Leyen told MEPs: “We’ve made a choice to not make any shortcuts when it comes to safety or efficacy.

“We fully defend that choice. There is no compromise possible when it’s a matter of injecting a biologically active substance into an individual who is in good health.”

She also claimed that the bloc’s joint scheme prevented the EU from collapsing.

The German said bigger member states would’ve sparked the downfall if they’d been allowed to secure doses ahead of their smaller neighbours.

“I cannot even imagine what would have happened if just a handful of big players, big member states, had rushed to it and everybody else left empty handed,” Mrs von der Leyen said.

“What would that have meant for our internal market and for the unity of Europe in economic terms?

Protest to be held at ‘Unplanned’ Friday night showing in London