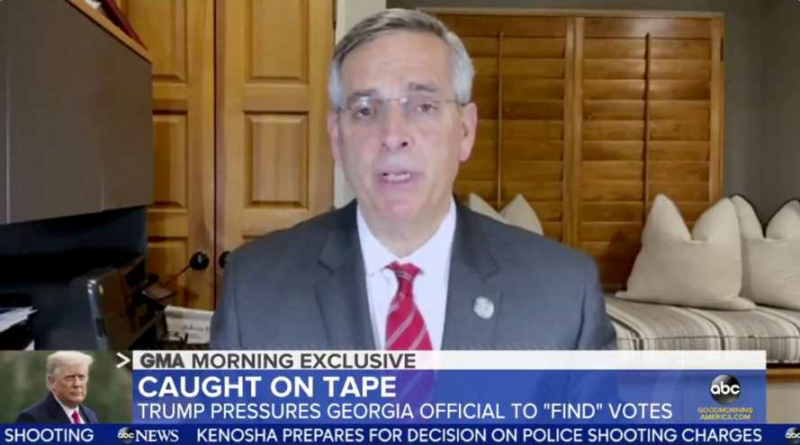 Georgia Secretary of State Brad Raffensperger on Monday spoke out about the extraordinary phone call he received from President Donald Trump over the weekend pushing him to “find” votes that would overturn President-elect Joe Biden’s win.

In an interview with ABC’s “Good Morning America,” Raffensperger said the data Trump used to peddle his baseless conspiracies of election fraud during the hourlong call was wildly inaccurate.

Trump “did most of the talking,” Raffensperger told host George Stephanopoulos. “We did mostly listening. But I did want to make my points that the data he had is just plain wrong.”

For example, Raffensperger said, Trump claimed “hundreds and hundreds” of ballots were cast on behalf of dead people, but in fact the state found only two instances of such fraud.

“That’s an example of just ― he has bad data,” Raffensperger said.

With less than three weeks until Inauguration Day, Trump hasn’t conceded to Biden and continues to falsely claim that Democrats “rigged” the election against him. The Justice Department and election officials nationwide have rejected the president’s allegations, finding no evidence of widespread voter fraud or ballot-counting irregularities.

Trump has focused much of his ire on Georgia, which he won in 2016 but lost to Biden by fewer than 12,000 votes in November. The president has repeatedly attacked fellow Republicans Raffensperger and Georgia Gov. Brian Kemp, who was an outspoken Trump supporter before the election.

Raffensperger’s office announced last week that it had completed an audit of ballot signatures and found no evidence of fraud in the presidential election. Georgia had already conducted a hand recount and a subsequent machine recount at the request of the Trump campaign; both reviews affirmed Biden’s win in the state.

In his Saturday call to Raffensperger, a recording of which was first obtained by The Washington Post, Trump pressured the secretary of state to recalculate the final vote tally in Georgia in his favor.

Raffensperger’s team reportedly decided to release audio of the call after Trump lied about its substance in a tweet Sunday.

“The truth will come out,” Raffensperger tweeted in response to Trump’s claim that the secretary of state had been “unwilling” to answer questions about so-called election fraud during their Saturday call.

“I never believed it was appropriate to speak to the president,” Raffensperger told ABC on Monday. “But he pushed out. I guess he had his staff push us. They wanted the call.”

David Worley, an attorney and the only Democratic member of Georgia’s election board, has called on Raffensperger to open an investigation into the call.

Raffensperger said Monday that he believes there would be a potential “conflict of interest” if he were to open an investigation himself and suggested the Fulton County District Attorney’s Office may be a more appropriate authority to conduct such a probe.

The secretary of state wouldn’t say whether he felt Trump’s call was unlawful, saying only that his office would “follow the law” and that “truth matters.”

“I support Republicans,” he told Stephanopoulos. “I always have. I probably always will.”

When pressed, Raffensperger said Trump isn’t yet on the ballot for 2024, so he’d have to “wait and see what would happen.”