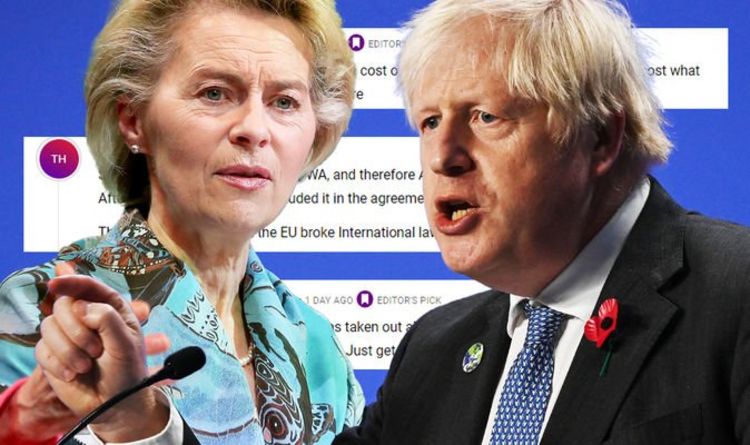 Mr Biden hosted Ursula von der Leyen at the White House to try and fix ties with the European Union. They discussed Brexit and the crisis in the Western Balkans turmoil. Speaking outside the White House, Ms von der Leyen said she and Mr Biden agreed that the Northern Ireland Protocol must be upheld.

She continued: “This Protocol has managed to square the difficult circle that Brexit caused.”

The Northern Ireland Protocol – agreed in the Brexit deal – is designed to avoid customs checks along the Irish border.

The British Government has demanded the terms of the protocol be renegotiated to ensure economic and social frictions developing in Northern Ireland are resolved.

The European Union has rejected demands from London for new talks, sparking threats from Brexit Minister Lord Frost to trigger Article 16 for the unilaterally safeguard the union.

Now, Express.co.uk readers have lashed out at the EU claiming the UK is a sovereign nation and not a “vassal state” of either the bloc or Washington.

One Express.co.uk reader, DavidD4, said: “So we the UK have a cost over Article 16 but the EU can invoke it at no cost.

“What hypocrites the EU are.”

Another person, Konami123, wrote: “Boris and Frost have taken out all surprise elements of triggering Art 16 by their constant posturing.

“Just get on with it. We are getting sick of it.”

TheRicardo commented: “So the EU breaks the terms of the WA, and therefore A16 is the next logical step.

“After all, that’s why lawyers included it in the agreement.

“This is a legal matter, and the EU broke International law again.”

“UK is a Sovereign Country and not a Vassal state of either the EU or USA.”

Wayne Calverley wrote: “That bit of spin from the EU about the US threatening the UK if we triggered Article 16 was made yesterday.

Emeritus Professor Adrian Guelke from Queen’s University Belfast said the EU was taken aback by the British Government attacking the Protocol, something which they agreed on during Brexit negotiations.

He told Express.co.uk: “I think the EU made a mistake when they thought they could dismiss British concerns.

“They were taken by surprise by the fact that our Government would attack what they agreed and something the EU proposed itself as a way forward.

“Once the EU got over the shock of the Government attacking its own proposals, the EU has behaved quite sensibly over the Protocol.”

The Withdrawal Agreement the UK struck with Brussels in December 2020 came after over three years of negotiations marred by divisiveness overfishing, the role of the European Court of Justice (ECJ), and Northern Ireland.

The ECJ in particular remains a key point of friction as the court plays an important role in the resolution of disputes as part of the protocol.

London has demanded the ECJ’s position to be reviewed, if not entirely deprived of its position of legal oversight.

Trump has entered Phase 2 of his legal defense strategy: All-out war with Congress