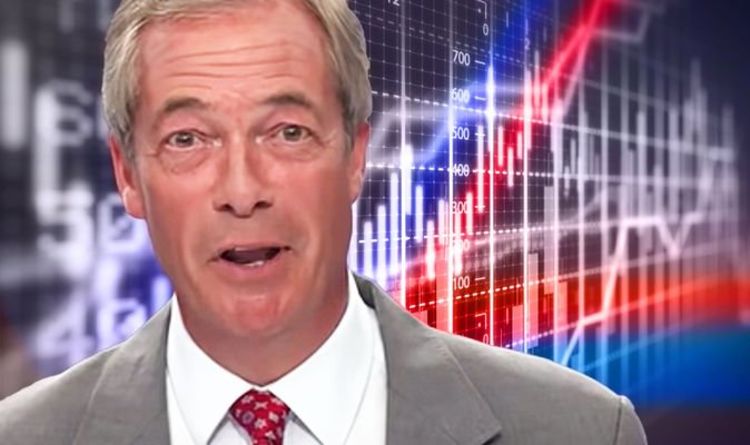 Boris Johnson’s withdrawal agreement did not include financial services – meaning that the sector has had to deal with increases in red tape since January. Despite this, the bloc imported 1.4 percent more from UK banks, insurers and other financial firms in the first quarter of 2021 than the same period of 2019, according to the Office for National Statistics (ONS).

Last year was left out of comparisons because of distortions caused by the Covid pandemic.

The data undermines one of the key arguments of Project Fear – that the UK would collapse in the event of a no deal Brexit, something the City of London has effectively been dealing with since January.

Mr Farage celebrated the news – and gleefully mocked Remainers over their mistaken belief that the UK needed the EU to survive.

The Brexit talisman tweeted: “Despite No Deal on financial services and all the predictions of doom, just look at these numbers.”

And far from damaging the UK, the data revealed that EU firms have taken the biggest hit.

Financial services exports from the EU to the UK slumped by more than a third over the same period.

This predominantly hit companies in Ireland, France and the Netherlands.

Throughout the same period, UK exports of legal, accounting, management, consulting and public relations services soared by more than a third to non-EU countries.

This helped compensate for the one percent fall in sales to EU countries.

While providing sobering reading for committed europhiles, it will give Brexiteers further proof that Global Britain is heading in the right direction.

It also highlights how strong and resilient the UK’s financial services sector is, even after it lost its passporting rights across the EU.

Ahead of the 2016 referendum, banks lobbied hard for continued access to Europe’s markets after Brexit.

Some claimed that hundreds of thousands of jobs could otherwise be lost.

But that hasn’t materialised, despite last year’s withdrawal agreement not including finance.

And the EU’s refusal to work with the UK has reportedly led Chancellor Rishi Sunak to abandon hope that Brussels will give the City access to EU markets.

This realisation has led him to instead focus on boosting the Square Mile’s competitiveness so it can deepen partnerships with countries outside the union.

In July, he said that Brexit had given the City “freedom to do things differently and better, and we intend to use it fully”.

Andrew Bailey, the Governor of the Bank of England, also warned that Brussels would be making a mistake if it locked Britain out of its financial markets.

He said: “Is the EU going to cut the UK off from itself?

“There are signs of the intention to do so at the moment, but I think that would be a mistake.

“I think that would lead to the fragmentation of markets.

“The problem with the fragmentation of markets is that it raises the cost of finance for everybody, including, by the way, the citizens of the EU.

“It will raise the cost of doing business in the EU.”