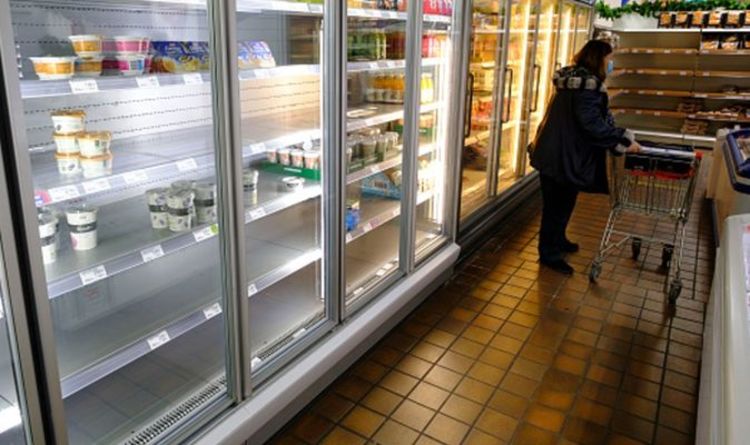 One third of North-east businesses hurt by Brexit says expert

Food shortages in the UK have been attributed, among other things, to Brexit and the UK’s departure from the European Union. Supermarkets are said to be “running low” on some products and photos of empty shelves have started to appear on social media.

In July, a Co-Op spokesman said: “We are sorry that we are running low on some products.

“Like many retailers, we are impacted by some patchy disruption to our deliveries and store operations but we are working closely with our suppliers to get re-stocked quickly.”

A Sainsbury’s spokeswoman said: “We are working hard to ensure customers can find what they need.

“While we might not always have the exact product a customer is looking for in every store, large quantities of products are being delivered to stores daily and our colleagues are focused on getting them onto the shelves as quickly as they can.”

Tesco originally claimed it had access to plenty of food and that deliveries were continuing across the UK.

But in June the supermarket chain noted vacancies meant there was now 48 tonnes of waste each week, and that the greatest impact was on fresh food with a short shelf life.

M&S said Covid cases among its staff were doubling every week, and Iceland admitted it was also experiencing a similar problem.

But Brexiteers across the country are growing sceptical of the alarm bells being rung across the UK.

Former Brexit Party MEP Martin Daubney blasted: “Has anybody else noticed that #foodshortages only seem to exist where loony #FBPE Remainers shop? Every single food shop I’ve been in for weeks has no shortages. It’s uncanny…”

Echoing his sentiment, others followed suit.

One Twitter user wrote: “I personally haven’t noticed any shortages in a number of stores I use however, I dare say there are shortages but yet again Remainers are conveniently conflating any shortages with Brexit. While this may have impacted, the bulk of the reasons will due largely to Covid.. Sorry.”

Another one said: “And cue the #FBPE pile on. Funnily enough there have been no shortages here, though I know several lorry drivers who gave up over the past 10 years or so because the wages were so low thanks to cheap labour from the EU.”

Someone else pointed out: “There’s an equivalent driver shortage in Germany and France and also in the States and Oz.”

A huge shortage of around 100,000 HGV drivers has placed massive pressure on food supply chains.

There are now calls for British Army HGV drivers to be put on standby to relieve the country’s chronic shortage of truckers and food.

This plea was made at a meeting between officials from the Department for Environment, Food & Rural Affairs (DEFRA) and food industry representatives.

A formal request has been sent from the Government to the Army for urgent military help.

During the meeting, Chris Hall, head of logistics at Asda, said his supermarket was “just keeping our head above water”.

Richard Burnett, Road Haulage Association chief executive, also told The Guardian: “Supermarkets are already reporting that they are not receiving their expected food stocks and, as a result, there is considerable wastage.

“We are weeks away from gaps on the shelves.

“We don’t know if it’s because Europeans who would traditionally be in these roles have left because of Brexit or because of Covid and aren’t able to come back yet because of the pandemic, but it is a very real problem.”

Congress Didn’t Include State And Local Aid In Stimulus, And The Most Vulnerable Will Suffer

Chris Cuomo's Ted Cruz Interview Gets Heated: 'I'm Raising My Voice to Match Your Own'