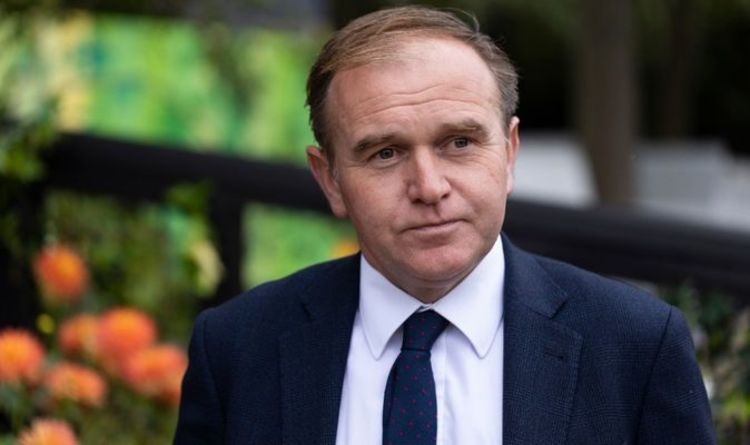 With the pig crisis set to continue throughout October, The i has revealed Government Ministers are considering lowering Britain’s language skills immigration requirement so qualified butchers from the mainland continent can fill vacancies in the UK. The Environment Secretary George Eustice is reported to be one of the Cabinet Ministers in favour of lowering the language threshold.

The ex-UKIP member met with pig farmers at the Department for Environment, Food and Rural Affairs on Thursday to discuss how the Government can assist the industry.

Mr Eustice reportedly told the pig farmers he would consider introducing “some tweaks” around the language rules.

He then told the ‘Farmers Weekly’ podcast: “We brought in a temporary visa scheme for poultry because there’s a very clear seasonal demand for around 5,500 people to work in the poultry sector.

“We don’t quite have that same rush on pigs, but what we are looking to do is see if we can make some tweaks to the skills list.

“They are able to come to the UK provided they’re paid that threshold of £25,000.

“Some processors have raised with us some questions around the language threshold to come in – so that’s something that we are looking at.”

The ex-Brexit Secretary and current Chancellor of the Duchy of Lancaster, Stephen Barclay, is also believed to favour granting easier visa access to continental workers.

But the news comes after Boris Johnson used his conference speech in Manchester to tell Tory Party members he wanted to create a high-skill and high-wage economy.

“We are not going back to the same old broken model with low wages, low growth, low skills, and low productivity, all of it enabled and assisted by uncontrolled immigration,” he said.

“The answer is to control immigration, to allow people of talent to come to this country, but not to use immigration as an excuse for failure to invest in people, in skills and in the equipment, the facilities, the machinery they need to do their jobs.”

According to The i, members around the Cabinet table are far from united as to whether or not they grant easier visa access to workers.

Patel and Kwarteng are instead reported to be “urging a tougher message”.

Ms Patel will have an important say as to whether the language threshold is lowered as it is believed proposed changes to visa rules need approval from the Home Office before they can be introduced.

Alexandria Ocasio-Cortez is right, Speaker Nancy Pelosi has a women of color problem