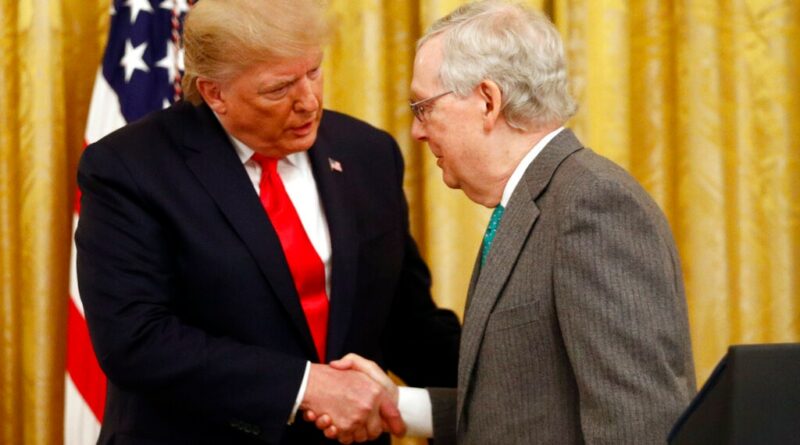 “Mitch is a dour, sullen, and unsmiling political hack, and if Republican Senators are going to stay with him, they will not win again,” Trump said Tuesday. “Where necessary and appropriate, I will back primary rivals who espouse Making America Great Again and our policy of America First.”

Trump also attacked McConnell’s wife, Elaine Chao, who was Trump’s transportation secretary but resigned after the Jan. 6 riot at the Capitol. He said, “McConnell has no credibility on China because of his family’s substantial Chinese business holdings.”

And the former president accused McConnell of being responsible for the GOP Senate runoff losses in Georgia because he would not support Trump’s ask for $2,000 stimulus checks.

President Donald Trump walks on the South Lawn of the White House in Washington, Sunday, Nov. 29, 2020, after stepping off Marine One. Trump was returning from Camp David. (AP Photo/Patrick Semansky)

This contradicts McConnell, who has made clear he blames Trump’s false claims that he won the presidential election and false accusations of widespread election fraud for depressing GOP voter turnout.

“Georgia was a fiasco,” McConnell told the Wall Street Journal in a story that ran Tuesday. “We all know why that occurred.”

But McConnell has not said anything since the Tuesday afternoon statement from Trump was released. His office did not return a request for comment from Fox News on Tuesday. This follows what was a multiday media tour in which the minority leader was justifying Republicans’ votes to acquit Trump of the impeachment charge that he incited an insurrection at the Capitol while making clear his opinion that Trump bears fundamental responsibility for the attack.

“Jan. 6 was a shameful day. A mob bloodied law enforcement and besieged the first branch of government. American citizens tried to use terrorism to stop a democratic proceeding they disliked,” McConnell wrote in a Wall Street Journal op-ed on Monday.

“There is no question former President Trump bears moral responsibility. His supporters stormed the Capitol because of the unhinged falsehoods he shouted into the world’s largest megaphone,” he continued. “His behavior during and after the chaos was also unconscionable, from attacking Vice President Mike Pence during the riot to praising the criminals after it ended.”

A source close to the former president told Fox News that the statement from Trump was meant to be a direct response to the Monday op-ed from McConnell. That source said it’s unclear if there are any upcoming rallies or events that Trump plans to participate in, but that Trump, as his statement says, plans to hit the campaign trail in GOP primaries before 2022. 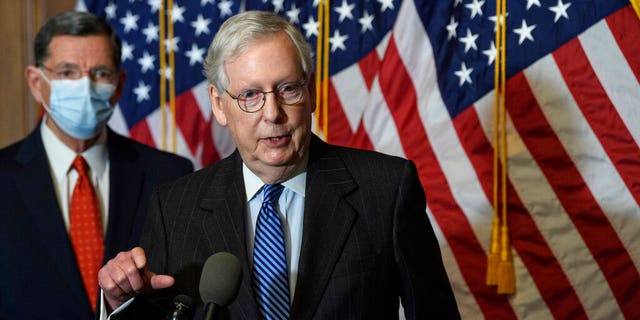 In this Tuesday, Dec. 15, 2020, file photo, Senate Majority Leader Mitch McConnell of Kentucky speaks during a news conference with other Senate Republicans on Capitol Hill in Washington. (Nicholas Kamm/Pool Photo via AP, File)

That promise from Trump that he will back primary challenges to GOP incumbents who he sees as insufficiently loyal paired with the explicit repudiation of McConnell as a “third rate” leader ratchets up the tension within the GOP ahead of 2022.

McConnell told the Journal that it was possible Trump could be “a constructive part of the process” in rebuilding a GOP Senate majority. It’s unclear if he still holds that view after Tuesday.

Trump had already made clear he would go after the incumbent House Republicans like Reps. Liz Cheney, R-Wyo., and Adam Kinzinger, R-Ill., who voted to impeach him in the House. But they were not leaders of an entire chamber like McConnell, though Cheney is the third-ranking House Republican.

Tuesday was also the most explicit indication to date that Trump would personally be involved in opposing GOP incumbent senators, with each seat meaning significantly more than in the House in the body that’s less than a quarter the size. He’d previously said “I hope to see” South Dakota Gov. Kristi Noem challenge Sen. John Thune, R-S.D. But he’d not promised personal involvement in the campaign. Further, Noem declined to run.

This could complicate matters for not only individual senators deciding whether they need to repudiate McConnell and pledge allegiance to Trump — or if they can walk the fine line of supporting both the former president and their Senate leader — but also for the GOP election apparatus itself. 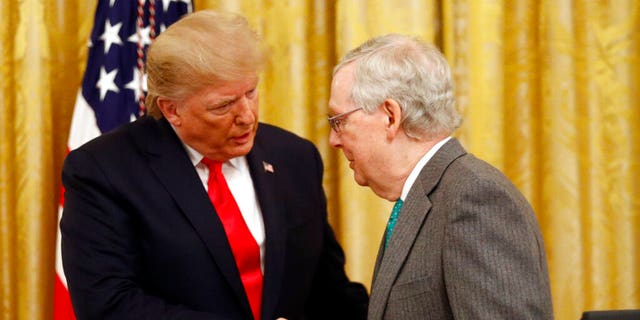 But if Trump is campaigning hard in certain races against senators who stand with the minority leader, it could strain the resources of the NRSC before the general election and potentially lead to some embarrassing losses if Trump’s fervent base carries his candidates to victory.

Fox News has reached out to the NRSC to ask what its stance on primaries in which Trump has endorsed the non-incumbent will be.

The feud between Trump and McConnell is worrying Sen. Lindsey Graham, R-S.C., who is widely considered an ally of both men.

“I’m more worried about 2022 than I’ve ever been. I don’t want to eat our own,” Graham said on Fox News Tuesday night. He said that McConnell should understand that “Trump is the most consequential Republican in the party” and that “Mitch McConnell was indispensable to Donald Trump’s success.”

“We need to knock this off,” Graham said.

Biden Scoffs at Trump’s Refusal to Concede as an ‘Embarrassment’