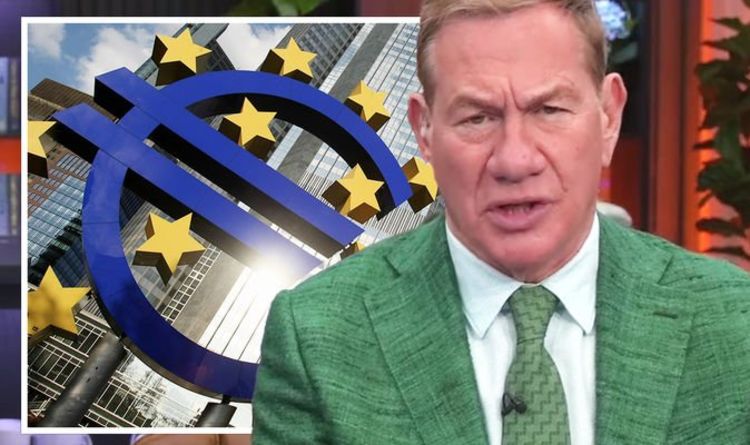 In recent years, Mr Portillo has become better known for his train journeys around the world than for his role in British politics. Mr Portillo had a long career in politics, both as an MP and a Government minister, eventually leaving politics in 2005 after he failed to seek re-election. This evening, he returns to a role that many Britons are likely more familiar with; traveling around the British Isles by locomotive, immersing himself in the often spellbinding scenery of the nation’s coastal regions in BBC Two’s, ‘Great Coastal Railway Journeys’.

While Mr Portillo has focused mainly on following in the footsteps of the great travellers in recent years, he continues to provide political comment and analysis for politics programmes.

In 2017, appearing in the BBC’s now finished ‘This Week’ show — a review of the political week — presented by Andrew Neil, he spoke about the EU and how the bloc’s future using the euro appeared, to him, “doomed”.

Speaking alongside Yanis Varoufakis, the former Greek minister of finance and member of the Hellenic Parliament, who is a vehement critic of the EU, Mr Portillo reflected on Mr Varoufakis’ conclusions and provided his own take on the euro and its direction.

Mr Varoufakis argues that the EU and the European Central Bank (ECB) are “glorified cartels” which prey on weaker nations and break from any traditional democratic process.

When asked by Mr Neil if the EU was doomed, Mr Portillo said: “I think the euro is doomed for exactly the reasons that Yanis gives.

“There are lots of countries that should never have been in the euro, but for the moment they still are in the euro.

“We never hear anything about Greece anymore, but I assume that Greece is still in a lamentable condition.

“In Italy, in Spain, in Portugal, I think things are a bit better than they were but there’s still massive youth unemployment.”

Mr Portillo, a Brexiteer, added: “I keep saying to young people in Britain who apparently are so keen to be members of the EU: go and tour southern Europe and see what it’s done to youth unemployment.”

Mr Varoufakis had direct experience with the EU and its monetary offshoots when he was a part of the radical Syriza government in 2015.

He served in his post for just six months with his main goal to renegotiate an extension to Greece’s loan agreement that it was forced to take from the ECB after the 2008 financial crash.

JUST IN: BBC panel laugh at ‘appalling on every level’ Boris takedown

Speaking shortly after his time in government, he recalled to a Ted Talk audience his encounter with the Eurogroup, the eurozone’s decision-making body, comprising the common currency’s finance ministers, plus the representatives of the troika (European Commission, ECB and International Monetary Fund).

He said: “I was told in no uncertain terms that our nation’s democratic process ‒ our elections ‒ could not be allowed to interfere with economic policies that were being implemented in Greece.

“At that moment I felt that there could be no greater vindication of Lee Kuan Yew, or the Chinese Communist Party, indeed of some recalcitrant friends of mine who kept telling me that democracy would be banned if it ever threatened to change anything.

“I want to ask you to join me in believing again that Lee Kuan Yew, the Chinese Communist Party and indeed the Eurogroup are wrong in believing that we can dispense with democracy ‒ that we need an authentic, boisterous, democracy.

“Without democracy, our societies will be nastier, our future bleak, and our great new technologies wasted.”

Mr Portillo has himself explored Greece’s decline and questioned whether the EU was to blame.

During his 2012 documentary ‘Michael Portillo’s Great Euro Crisis’, he spoke to a variety of people across the country to find out how the crash had affected them, and whether they wanted to return to their native drachma currency.

Speaking to hedge fund manager and economist Jason Manolopoulos, who is an expert on Greece’s economic makeup post-2008, he asked whether the figures that allowed Greece to join the euro in 2001 were “rigged” — a suggestion that has long floated in politics.

Mr Manolopoulos claimed: “It’s common knowledge that they were rigged.

“Everybody in the European Commission also knew it.

“But Greece joining was a political project back then rather than a purely economic project.”

Greece enjoyed what came to be known as the “boom years” after joining the euro: the country hosted the Olympics; Greeks began to take out loans to finance a new way of life; and the country looked to remodel itself after years of relative poverty compared to other European nations.

Mr Manolopoulos explained: “You had all these fancy villas springing up.

“You had huge amounts of spending on luxury goods.

“People were taking weekend trips to Paris rather than going to their local village, there was a huge sense of euphoria, everybody was happy going out.

“Greece had won the European Football Championship, won the right to hold the Olympics, it was like a dream come true.”

At one point in 2010 there were eight billion car loans in Greece — three and a half percent of its GDP compared to zero a decade earlier.

When asked whether Greeks would have been able to buy as many cars as they did if the country hadn’t joined the euro, Mr Manolopoulos said: “Absolutely not.”

Many others, like Mr Manolopoulos, Mr Varoufakis and Mr Portillo, have condemned this short-lived financial boom and the effect it has since had on Greece.

Mr Portillo first became an MP in 1984, representing Enfield and Southgate, a seat he held until 1997 before losing in a shock defeat that characterised the Labour Party’s landslide victory and the beginning of the Tony Blair era.

During this time, he held several different ministerial positions including Secretary of State for Defence.

He was later re-elected in a by-election for Kensington and Chelsea in 1999 and was Shadow Chancellor of the Exchequer from 2000-2001.

Hannity Goes All In Defending Cruz’s Cancun Trip, Gets Contradicted By Cruz On Own Show

By suspending Parliament ahead of Brexit, Boris Johnson is gambling with his own legacy