President Joe Biden and Congress appear set to extend a Trump administration decision to impose harsher minimum sentences for people caught with the powerful opioid fentanyl, a step liberals argue would harken back to Biden’s reputation as a leading drug warrior — even as critical Democratic Sen. Joe Manchin (W.Va.) pushes to make the change permanent.

“The Biden administration, its leaders and economists, are faced with their first major test of criminal justice reform,” Hilary Shelton, the director of the Washington bureau of the NAACP, told reporters on Monday. “If they choose to extend this Trump-era policy, it will increase mass incarceration, and the over-policing and incarceration of people of color, and will be a missed position on Biden’s campaign promises.”

At issue is the classification of fentanyl, a drug the Centers for Disease Control has highlighted as a key reason fatal opioid overdoses spiked to 88,000 in the 12-month period ending in August 2020, a 23% increase over the year before. The drug, which is more powerful than morphine and used legally as a pharmaceutical to treat patients in severe pain, had long been classified as Schedule II, making unauthorized use or manufacture illegal.

Starting in 2018, the Trump administration began an emergency classification of fentanyl and its analogs ― a wide selection of drugs with similar chemical structures ― as Schedule I drugs, meaning possession and distribution now carry harsher mandatory minimum sentences. Congress extended that classification in early 2020, and it’s set to expire in early May.

In a statement, a spokesperson for the White House Office of National Drug Control Policy said the administration would support an extension, emphasizing the need to find an agreement to “address legitimate concerns related to mandatory minimums and researcher access to these substances.”

“The Administration takes the May 6 deadline seriously and will work with Congress to seek a clean extension to prevent this important law enforcement tool from lapsing,” the spokesperson said. (RealClearPolitics first reported the administration’s position.) 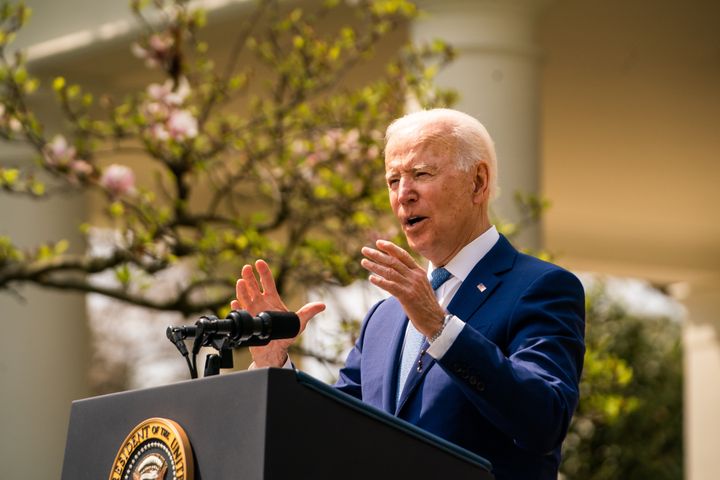 It’s easy to see how the fight over fentanyl classification could become an intra-Democratic battle. More than 100 liberal, criminal justice and drug policy advocacy groups ― including the NAACP, the American Civil Liberties Union, the Leadership Conference on Civil and Human Rights and Families Against Mandatory Minimums ― signed on to a letter sent last week pushing key members of Congress to let the emergency classification expire and instead focus on using public health to battle the epidemic.

“As we approach the 50-year milestone of President Nixon’s announcement of the War on Drugs, there is ample evidence that these unscientific policies destroy communities, entrench racial disparities, and do nothing to reduce drug supply or demand,” the groups wrote. “Lawmakers should instead support legislation grounded in public health and evidence-based approaches to illicit fentanyl-related overdose deaths. We must learn from the lessons of the past.”

On the other side is Manchin, who has teamed up with Sen. Rob Portman (R-Ohio) to push legislation to make the classification permanent. Manchin, widely seen as one of the most moderate Democrats in the Senate, has emerged as a key decision-maker for the fate of the Biden administration’s larger agenda on everything from COVID-19 recovery to infrastructure to immigration.

Manchin’s office did not respond to emails seeking comment on the Biden administration’s decision, but when introducing the legislation ― dubbed the FIGHT Fentanyl Act ― in February, Manchin said the legislation would “keep fentanyl out of our communities.” West Virginia has the nation’s highest overdose rate.

It’s unclear how long an emergency classification extension might last. While the administration originally told RealClearPolitics it would seek a seven-month extension, the timeline does not appear to be set in stone.

Shelton and other advocates said Biden’s decision on how to handle fentanyl classification will be a key marker on whether he’s able to leave behind his Senate reputation as a drug warrior and architect of mass incarceration. Shortly before the start of his 2020 presidential campaign, Biden explicitly apologized for supporting legislation that created a significant sentencing disparity between powder and crack cocaine.

In their letter, advocacy groups explicitly compare the fentanyl classification to the moral panic over crack cocaine in the 1980s, arguing that “alarmist media and law enforcement headlines that are informed by mythology rather than science” have fed both. (Liberal groups, for instance, have pointed to law enforcement claims about officers overdosing after merely touching fentanyl.)

“Any further extension of the Trump administration’s class-wide scheduling policy threatens to repeat past missteps with crack cocaine that policymakers are still working to rectify,” the groups wrote.

In both cases, more than two-thirds of the people who were prosecuted were racial minorities. And in 2019, just 10% of the cases involving fentanyl targeted high-ranking dealers, organizers or importers, which ACLU senior legislative counsel Aamra Ahmad said was “following the outdated War on Drugs playbook.”

A GAO report released Monday found that the Trump administration mostly used additional sentencing authority to target low-level dealers, and the classification did little to reduce the availability of fentanyl analogs.

Law enforcement groups have suggested failing to extend the policy would result in the instant legalization of thousands of substances with only minor chemical differences from fentanyl, an assertion drug policy groups have challenged, noting that harmful analogs are illegal even without the emergency classification.

As an alternative to Manchin and Portman’s legislation, advocacy groups have pushed Democrats to support the STOP Fentanyl Act, co-sponsored by Reps. Annie Kuster of New Hampshire and Lisa Blunt Rochester of Delaware, which focuses on supporting public health efforts to battle the drug.

The House Energy and Commerce Committee is set to discuss Kuster and Blunt Rochester’s legislation at a hearing on Wednesday morning on drug addiction during the COVID-19 pandemic. Regina LaBelle, the acting director of the Office of National Drug Control Policy, is set to testify that the administration plans to pursue “balanced approaches to drug policy that include public health and public safety.”

The White House has yet to name a nominee for permanent director of the office, a job often referred to as the nation’s “drug czar.” On Monday, Biden nominated Anne Milgram – a former New Jersey attorney general widely seen as a criminal justice reformer – to lead the Drug Enforcement Administration. The administration also included $4 billion in funding for substance abuse and mental health programs in the COVID-19 relief legislation that passed earlier this year.

Still, many liberals remain skeptical of Biden’s positions on drug issues. The president has steadfastly resisted supporting the legalization of marijuana, for instance, despite widespread and growing support among Democratic legislators and the public at large.

Many Trump nominations already were stalled. The pandemic has made it worse

Interior Chief Blames Congress For His Inaction On Climate Change