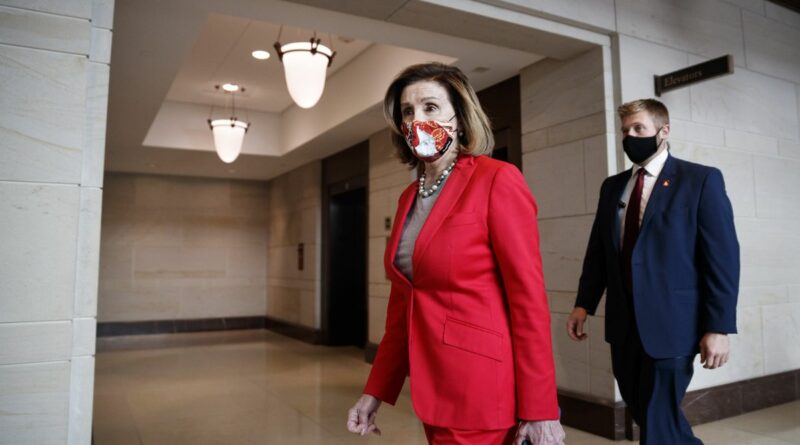 Nancy Pelosi was elected House speaker as the new session of Congress began with a narrower Democratic majority, which will present her with multiple challenges in what could be her final two year term in the top post.

Pelosi, 80, the only woman to hold the speaker’s gavel, was selected again with 216 votes, just two more than a majority of those present, despite a clamor from both the progressive and moderate wings of her party for a new generation of leadership.

“Now is a time for our nation to heal,” Pelosi said in a speech after the vote. “Our most urgent priority will continue to be defeating the coronavirus,” she said, adding that “the pandemic has pulled back the curtain on even worsened disparities in our economy and our society.”

Republicans nominated their House leader, Kevin McCarthy, to run against her. He received 209 votes. Afterward McCarthy gave a sharply partisan speech in which criticized Pelosi’s House majority in the last Congress as too distracted by progressive priorities to govern effectively.

31 are Tweeting about this

For the past two years, Pelosi has been the Democrats’ main foil for President Donald Trump, and that’s helped keep her caucus unified despite the ideological spread from progressives like New York Representative Alexandria Ocasio-Cortez to centrists like Representative Josh Gottheimer of New Jersey. For the next term, Pelosi’s challenge is to keep the party marching behind President-elect Joe Biden’s agenda.

The Democratic advantage in the House has shrunk to 222-211 — with two seats still open — after Republican gains in the November election.

Pelosi was unchallenged within the Democratic party for her fourth, nonconsecutive, term as speaker. The young, recently elected progressives who’ve been most vocal about the need for fresh leadership all voted for her, including Ocasio-Cortez.

“We are just an extremely slim amount of votes away from risking the speakership to the Republican Party, and this is bigger than any one of us,” Ocasio-Cortez said after the vote. “When the Republican Party is attempting an electoral coup and trying to overturn the results of our election, this is not just about being united as a party, it’s about being united as people who, with basic respect for rule of law.”

Another progressive, Jamaal Bowman of New York, who ousted a veteran Democrat in a primary to win his seat in the 2020 election, said, “Our country needs stability right now and it is really important for the Democratic Party to come together.”

He added that after conversations with Pelosi he is “very, very confident” that progressive priorities like Medicare for All and the Green New Deal will be brought to the floor.

Pelosi did suffer some defections among Democrats who represent swing districts with significant numbers of Republican voters.

Three other Democrats who, like Golden and Lamb, didn’t vote for Pelosi as speaker in 2019 voted present: Mikie Sherrill of New Jersey, Elissa Slotkin of Michigan and Abigail Spanberger of Virginia.

It was only the sixth time since 1913, when the House first reached its current size of 435 seats, that a speaker was elected with fewer than 218 votes.

The vote took longer than usual due to procedures in place because of the pandemic. House members entered the chamber in groups to cast their votes.

Illustrating the coronavirus risks and the stakes for Pelosi, a special booth was constructed in the House gallery to allow voting by at least three members who are technically in quarantine because of exposure to Covid-19. Procedures that allowed for proxy voting in the last Congress haven’t been adopted in the current session.

Republican Representative Rodney Davis was among the GOP members who blasted the accommodation.

“This is against everything we have been told during the course of this pandemic for House operations,” Davis said. “To build this structure in the dark of the night only to only protect the votes that Pelosi needs to get re-elected speaker is shameful.”

Pelosi committed in 2018 to not seeking the speakership beyond 2022 in response to demands from younger Democrats seeking generational change. Talking with reporters last month, Pelosi declined to directly respond to a question about that commitment stands.

“We never expected to have another term now,” she said. “I consider this a gift.”

No deal Brexit explained: What does Operation Yellowhammer really mean for you?