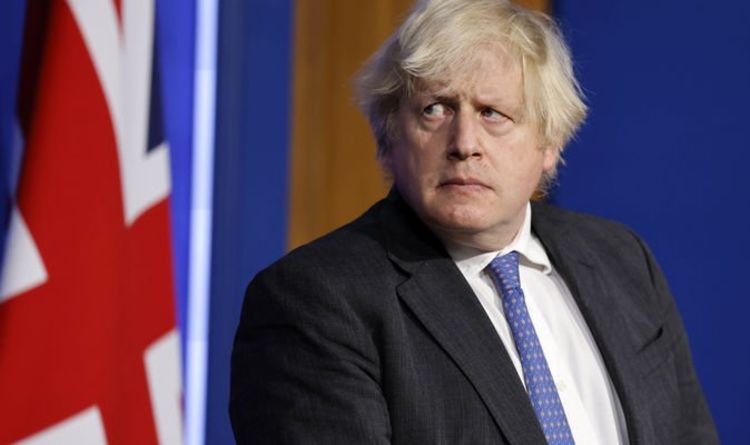 Sources said the snap of an alleged No 10 “garden party” was probably captured from one of the state rooms used by Chancellor Rishi Sunak and his team. The gathering last year is one of a number which have been reported in Downing Street and across Whitehall during the coronavirus restrictions in 2020. And the emergence of the picture further fuels reports of acrimony between No 11 and No 10.

Mr Johnson denied a party was being held in the Downing Street garden.

He said: “That was a picture of people at work, talking about work.”

It comes as senior Tories demand Mr Johnson carry out a major shake-up as toxic leaks about alleged lockdown-busting parties are only helping the Labour Party.

No 10 insisted the photo of Mr Johnson, his wife and 17 staff members in the Downing Street garden with bottles of wine and a cheese board shows them having a “work meeting”.

The gathering took place on May 15 last year after a press conference held during the first lockdown.

Earlier that day, then-health secretary Matt Hancock had told the daily coronavirus briefing: “People can now spend time outdoors and exercise as often as you like – and you can meet one other person from outside your household in an outdoor, public place. But please keep two metres apart.”

Deputy Prime Minister Dominic Raab suggested the event took place after work. He said: “Sometimes after a busy working day people have a drink. That was not against the regulations.

“It is not just a place of work for all the staff that work in Number 10 and the Prime Minister, but it is also the residence of the Prime Minister and his very young family. I genuinely don’t think it gets classified as a party because Carrie popped down and spent a little bit of time there.”

Asked whether he believed “someone or some group” is “dripping out leaks to bring Boris Johnson down”, Mr Raab added: “It’s certainly being done with an animus.”

Tory MP Michael Fabricant said: “Someone has clearly got it in for Boris with this drip, drip, drip of leaks, some of which may be genuine.

“The only person rubbing his hands on all this is Keir Starmer as it smothers all the good news about Britain’s low unemployment and high vaccine booster rate.”

A senior Tory source said change is needed in the PM’s staff, adding: “Boris needs to shake the place up a bit, show them he’s in charge. Clearly there are forces out to get him and it’s now time to act.

“This briefing against him can’t go on any more as it will eventually become irreversible.”

Former shadow chancellor Ed Balls claimed the image was shot from the 11 Downing Street first floor balcony, thought to be outside an office used by Mr Sunak.

Senior civil servant Sue Gray has been tasked with investigating reports of parties after Cabinet Secretary Simon Case was removed from the probe after it was revealed he had known about a quiz held in his department.

Mr Starmer said it was “a stretch” to call the garden gathering a work meeting.

Jo Goodman, co-founder of Covid-19 Bereaved Families for Justice, said it is “exhausting” for those “who sacrificed so much to see the constant, flagrant disregard we have all been held in”.

She added: “We’re not sure how much more the PM expects us to take before he’ll accept he has to be open with the public about these events.

“This supposed work meeting, with no pen, paper or laptop in sight, instead replaced with vital cheese and wine, shows that he presided over a culture of believing that the rules applied only to other people since early in the pandemic.”

Among those pictured in the garden snap are Imran Shafi, the PM’s private secretary for public services; James Slack, the Downing Street director of communications; Jess Seldon, the senior press officer; Martin Reynolds, the PM’s principal private secretary, and Dominic Cummings, who was the chief adviser. Mr Hancock can also be seen in the picture.

Edmund Morris, known for his biography of Reagan, dead at 78