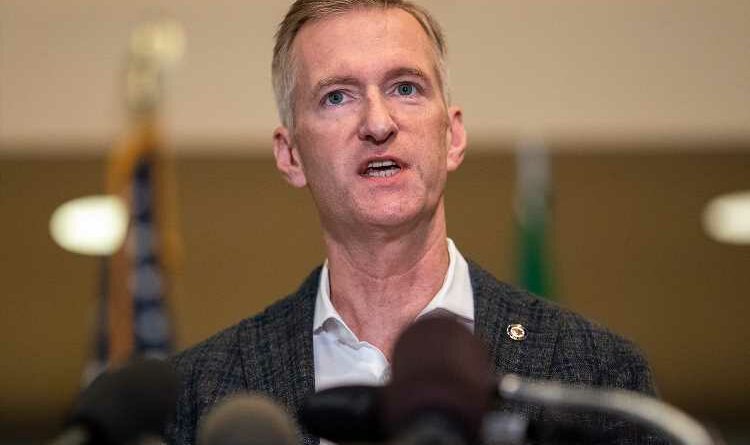 The mayor of Portland filed a police report Sunday night after, he said, he pepper-sprayed a maskless man who would not back away from within six feet of him after following him outside a local restaurant.

Ted Wheeler told Portland Police Bureau that a man — later identified by police as 48-year-old Cary Cadonau — came up to him after he had finished dinner at a local restaurant with one of the city's former mayors, Sam Adams, according to a police report reviewed by PEOPLE.

Portland police told PEOPLE they were investigating the incident, which was first reported by the Portland Mercury.

Mayor Wheeler, 58, told Sgt. Pete Simpson on Sunday night that Cadonau approached him as he and Adams were leaving the restaurant. The man accused Wheeler of not following the city's COVID-19 regulations because he had seen Wheeler lower his mask, though the mayor told Cadonau he was allowed to while eating.

Wheeler said Cadonau then refused to step back when he asked the man to remain six feet apart — the recommended social distance during the pandemic.

"He did not do, so I informed him that I was carrying pepper spray and that I would use it if he did not back off," Wheeler told police. "He remained at close distance, I pulled out my pepper spray and I sprayed him in the eyes."

Part of the altercation was recorded by Adams and the audio was later published by local news outlets.

It appears to show Cadonau scolding Adams and Wheeler — a Democrat first elected in 2017; though a controversial figure to some in Portland, especially progressives — and then them defending themselves over how they had dinner during the pandemic.

They told Cadonau they were six feet apart and were eating and drinking.

"You are one foot away from me. You are not six feet away," Wheeler says, according to the audio.

And when Cadonau says, "You just pepper-sprayed me for no reason at all," Adams responds: "Actually, I was here and you were like a foot from him. He asked you to back away and you didn't." Cadonau is heard saying: "I can't see, but the mayor has just thrown something at me."

Wheeler told police he threw a water bottle to the man so he could wash his eyes out.

Cadonau did not want to discuss the incident with police, Simpson said. According to the Willamette Week, he is an attorney and his family owns a notable local dairy company.

A spokesperson for Cadonau told the Week that they were working to corroborate the sequence of events "so that the public gets a good idea of, not what one person saw or is saying they experienced, but what really went on."

However, while Cadonau told police he wanted Wheeler held "accountable," according to the Week, he declined to talk more about the altercation or share video he claimed to have taken.

Cadonau's representative did not immediately respond to PEOPLE's request for comment.

"I am remorseful for my decision to confront Mayor Wheeler on Sunday, Jan. 24, and I am sorry that he felt the need to use pepper spray," he said in a statement. "I cherish Portland and our local community and recognize that Mayor Wheeler has a very difficult job. I have contacted Mayor Wheeler's office to request an opportunity to amicably resolve this matter."

There have been 29,216 reported cases of COVID-19 in Multnomah County, where Portland is located, according to a New York Times tracker. There have been 468 reported deaths linked to the novel coronavirus.

Robert King, a senior policy adviser to Wheeler, had first called the sergeant at 9 p.m. local time, about an hour after the incident occurred, according to the police report. Sgt. Simpson says he then received a call directly from Wheeler describing his perspective on what happened.

Both Wheeler and Adams said Cadonau had been taking pictures of them while they were dining before approaching the mayor as he left the restaurant.

The pepper-spraying incident is the latest altercation between Wheeler and some locals who criticize him amid both the pandemic and local protests against of racial injustice and police brutality that drew national attention last year.

The Washington Post reported that Wheeler moved out of his condo last September after protesters broke his windows and threw an object that was on fire into his home.

Earlier this month, while Wheeler was having a meal at another outdoor restaurant, Oregon Public Broadcasting reported that a woman swatted him on the shoulder as a small crowd began to shout obscenities at him and told him to leave.

"Because of recent threats and incidents where people have aggressively accosted the Mayor, increased security measures have been implemented," the mayor's spokesperson, Tim Becker, told PEOPLE. "Additional security options for [Portland City] Council members have also been implemented."

As information about the coronavirus pandemic rapidly changes, PEOPLE is committed to providing the most recent data in our coverage. Some of the information in this story may have changed after publication. For the latest on COVID-19, readers are encouraged to use online resources from the CDC, WHO and local public health departments. PEOPLE has partnered with GoFundMe to raise money for the COVID-19 Relief Fund, a GoFundMe.org fundraiser to support everything from frontline responders to families in need, as well as organizations helping communities. For more information or to donate, click here.

Liberty Vittert: US must end imports of Chinese products made with slave labor and protect oppressed Uighurs

Trump Says He’s Considering a Ban on TikTok in the U.S.