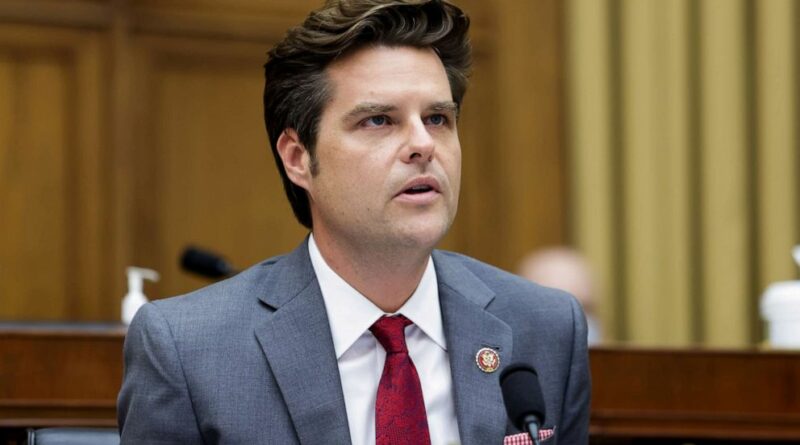 Rep. Matt Gaetz, R-Fla., on Tuesday denied that he had an inappropriate sexual relationship with a 17-year-old girl amid new reports that the Justice Department was investigating the alleged relationship — claiming the probe was part of an elaborate extortion scheme.

The investigation, first reported by The New York Times, began last summer and focuses on whether Gaetz had a sexual relationship with an underage girl and paid for her to travel with him, and whether he violated federal sex trafficking laws, a source aware of the investigation confirmed to ABC News.

Gaetz told the Times that his lawyers were informed that he was the subject, not the target, of an investigation.

“I have not had a relationship with a 17-year-old. That is totally false,” Gaetz told Fox News’ Tucker Carlson in an interview Tuesday night. “That is false and records will bear that out to be false.”

The New York Times reported that the inquiry into Gaetz is part of a larger inquiry into Joel Greenberg, a former Florida official indicted last summer on charges that included sex trafficking of a child and financially supporting people in exchange for sex. Greenberg has pleaded not guilty.

On Fox News, Gaetz — who, according to an Axios report earlier on Tuesday, had been telling confidants he was considering retiring from Congress and possibly joining the right-wing media outlet Newsmax — appeared to confirm the investigation when he said he was approached by someone who claimed he could “make this investigation go away.”

“There was a demand for money in exchange for a commitment that he could make this investigation go away along with his co-conspirators,” Gaetz said, identifying the alleged extortionist as former DOJ official David McGee.

McGee did not respond to ABC News’ request for comment. In an interview with the Washington Post, McGee denied Gaetz’s claim that he was part of an extortion effort targeting the Florida congressman.

“It is completely false. It’s a blatant attempt to distract from the fact that he’s under investigation for sex trafficking of minors,” McGee told the Post. “I have no connection with that case at all, other than, one of a thousand people who have heard the rumors.”

“I do believe that there are people at the Department of Justice who are trying to smear me,” Gaetz said on Fox News.

In a statement from his office, Gaetz said he had been cooperating with authorities and that his father “has even been wearing a wire” at the FBI’s direction “to catch these criminals” seeking to extort him for $25 million.

Asked in the Fox News interview how long the investigation had been going on, Gaetz said “I don’t know,” and went on to suggest that someone is alleging there are “pictures of me with child prostitutes,” which he claimed was “obviously false.”

At one point during the interview, Gaetz claimed that two years ago he had dinner with Carlson and took along a “friend” who was “actually threatened by the FBI, told that if she wouldn’t cop to the fact that somehow I was involved in some pay-for-play scheme that she could face trouble.” But Carlson promptly denied knowing what Gaetz was talking about, responding: “I don’t remember the woman you’re speaking of or the context at all, honestly.”

After returning from a commercial break, Carlson called the segment “one of the weirdest interviews I’ve ever conducted.”

Rep. Paul Gosar: Trump was right to withdraw troops from Syria – We should protect US borders instead

A Republican congressman says Trump has 'engaged in impeachable conduct'