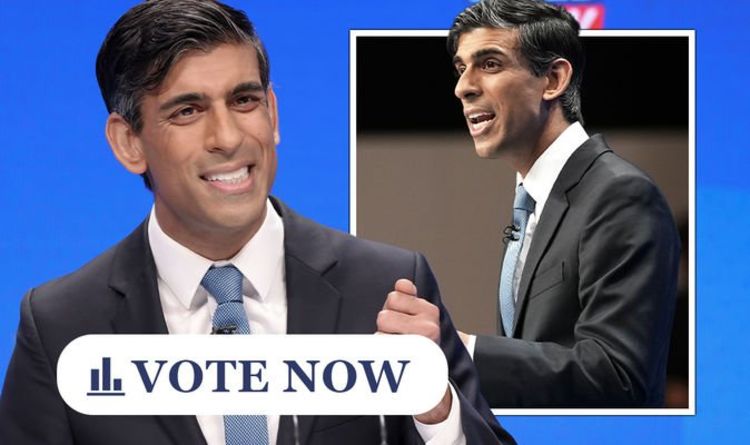 The Chancellor announced that investment in jobs and opportunities for young people is at the heart of the Treasury’s plan for the year ahead, with a £500million investment into extending job-hunting support schemes. Mr Sunak also announced that the Government will create 2,000 elite AI (artificial intelligence) scholarships for disadvantaged young people.

Opening his speech, the Chancellor told the audience about his moral values and hopes for the future of Britain.

He said: “Pragmatism, fiscal responsibility, a belief in work, and an unshakeable optimism about the future, this is who I am, this is what I stand for.”

Mr Sunak praised the furlough scheme that supported one in three young people under the age of 25 during the pandemic, as well as the Kickstart scheme which was launched in September 2020 to help young people get back into work.

He explained that the UK’s unemployment rate is less than five percent and falling, which is lower than in the US, Canada, France, Italy and Spain.

Mr Sunak argued that the UK is successfully undertaking one of the fastest Covid recoveries of any major economy in the world.

However, the Chancellor acknowledged the financial challenges that Covid has brought the Treasury.

He said: “I have to be blunt with you, our recovery comes with a cost.

“Our national debt is almost 100 percent of GDP, so we need to fix our public finances.

Mr Sunak took the opportunity to criticise the opposition party for their handling of tax rises.

“Since 2010, we’ve had five Labour leaders, seven shadow chancellors, and innumerable spending pledges, and in all that time they still haven’t got the message. The British people won’t trust a party that isn’t serious with their money and that’s why they vote Conservative,” Mr Sunak said.

Mr Sunak claimed that tackling the cost of living is one of the central missions of this Conservative Government despite the recent 1.25 percent rise to National Insurance taxation.

Demonstrating his ethical perspective, he explained: “Picture this, you’re a young family, you work hard, saving a bit each month, but it’s tough.

“You have ambitions for your career’s, for your children, you want to give them the best, more than you had.

“Now you tell me, is the answer to their hopes and dreams just to increase their benefits? Is the answer to tell that young family the economic system is rigged against you and the only way you stand a chance is to lean ever more on the state?

“Be in no doubt, that is the essence of the Labour answer, and not only does Labour’s approach not work in practice, it is a desperately sad vision for our future.”

Does Mr Sunak’s vision for the future align with yours? Would he secure the British public’s vote for Prime Minister? Vote now.

Mr Sunak claimed to be a politician with a forward-thinking mindset who has turned away from “us versus” them old-fashioned politics.

Referring to the Labour Party, he said: “You cannot make progress if you’re pitting people against each other, that’s what you get from a tired, fearful sort of politics.

“We saw it last week in Brighton, it’s not just that Labour don’t like us, they don’t even like each other.

Overall Mr Sunak’s speech gave the British public a true insight into who he claims to be and what kind of leader he could be for Britain – one that is focused on improving opportunities for those who are disadvantaged, not increasing hand-outs.

“I believe that every person in this country has the potential to become something greater, and I know that we and only we, the Conservative Party are the ones that can make that happen.”

The Kickstart scheme, announced by the Chancellor as part of his Plan for Jobs, gave employers the opportunity to offer those aged 16-24 who are claiming Universal Credit a six-month work placement.

The Government fully funded each “Kickstart” job – paying 100 percent of the National Minimum Wage, National Insurance and pension contributions for 25 hours a week.

Stay up to date with Brexit, the SNP and news from Number 10 by signing up for our free politics newsletter here: /newsletter-preference-centre

The Treasury said that the new jobs created by the scheme would “give young people – who are more likely to have been furloughed, with many working in sectors disproportionately hit by the pandemic – the opportunity to build their skills in the workplace and to gain experience to improve their chances of finding long-term work”.

Avaani Johal, a 23-year-old law graduate who was made redundant at the start of the pandemic, managed to secure a job with the Kickstart scheme after facing months of unemployment.

She told Express.co.uk: “Job hunting during the pandemic was an extremely difficult task with competition at its highest yet.

“I spent over a year and a half applying for roles with very little success, but the Kickstart scheme has opened doors for me.

“I am very grateful that the scheme exists, as I never would have been able to get into this career field without it.”

Tell us what you think of Rishi Sunak’s work as Chancellor so far, and whether you think he has what it takes to be the next UK Prime Minister. Comment below.