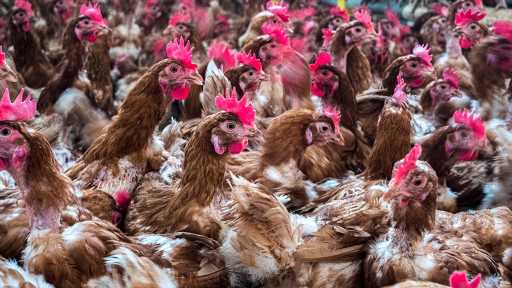 Russian health officials reported a new strain of avian flu never before transmitted from birds to humans Saturday, after an outbreak first occurred in a poultry farm last December.

Anna Popova, the country’s public health chief, announced that seven cases of the H5N8 strain had been detected amongst the poultry farm’s workers in southern Russia – prompting health officials to alert the World Health Organization (WHO).

“Only time will tell how soon future mutations will allow it to overcome this barrier,” Popova said in televised remarks Saturday, reported Bloomberg.

The global community has seen various strains of swine flu such as H5N1, H7N9 and H9N2 – but Russia’s top health official said all cases where mild and the infected individuals have recovered from the virus.

“The discovery of this strain now gives us all, the whole world, time to prepare for possible mutations and the possibility to react in a timely way and develop test systems and vaccines,” she added.

Fox News could not immediately reach the WHO, but officials told Bloomberg that those infected were asymptomatic and no human to human transmissions have occurred at this time.

Reports surfaced late last year that showed the H5N8 strain was prevalent in birds in at least 15 regions in Russia, and cases had been identified in China, the Middle East, North Africa and parts of Europe.

Not all avian flus can infect humans, and health officials have previously stated that poultry workers are most likely to get sick when working with infectious or dead animals.

The most well-known avian flu strain, H5N1, has a 60 percent mortality rate, but the U.S. has yet to report any infections amongst people, according to the Centers for Disease Control and Prevention.

Though the WHO have said that cases of avian flu amongst humans only “occasionally” occurs, they did not respond to Fox News’ questions about the latest H5N8 strain.