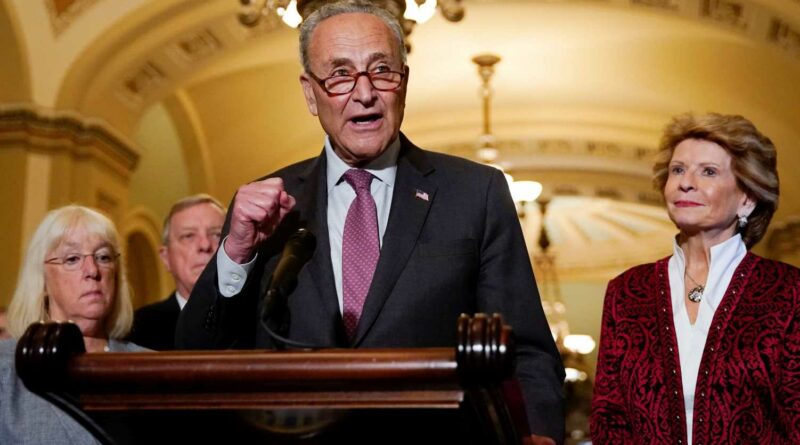 Senate Majority Leader Chuck Schumer, D-N.Y., plans to move ahead this week with the process of passing a $1.2 trillion bipartisan infrastructure bill in the Senate, despite the fact that senators negotiating the bill have yet to reach consensus on what will be in it.

Also this week, Schumer wants Senate Democrats to agree to move forward with a $3.5 trillion budget resolution that they plan to pass without any Republican votes.

Schumer is under intense pressure to advance both of President Joe Biden's domestic spending packages before senators leave Washington for a scheduled August recess early next month.

But several Republicans whose votes Schumer will need to pass the 60 vote threshold to advance the infrastructure bill have sounded alarms about the rushed timeline, and threatened to vote against any effort to move the bill before negotiators have finished writing it.

"We shouldn't have an arbitrary deadline of Wednesday," said Ohio Sen. Rob Portman, the lead Republican negotiating the deal, on CNN's "State of the Union" Sunday. "We should bring the legislation forward when it's ready."

But Schumer sees the deadline as a crucial lever to force the bipartisan group of 22 senators to come to an agreement on tough issues.

None is more difficult than how to pay for the $579 billion in new infrastructure funding they agreed to spend earlier this year.

Portman said he spent this past weekend working on the deal with members of the Senate group and the White House.

But rather than grow the list of potential funding sources for the bill, Portman said Republicans had recently axed a provision that would fund part of the upgrades to infrastructure by collecting unpaid taxes.

"Everyone has been having productive conversations, and it's important to keep the two-track process moving," Schumer said Thursday on the Senate floor.

"All parties involved in the bipartisan infrastructure bill talks must now finalize their agreement so the Senate can begin considering that legislation next week," said Schumer.

Schumer announced that he intends to file a motion Monday to proceed with a shell bill that would be used as the "vehicle" for the infrastructure bill once it is written. The shell bill contains highway funding authorization that has been passed by the House already.

Doing so would set up another procedural cloture vote on Wednesday. If 60 senators vote to invoke cloture, that triggers up to 30 hours of debate in the Senate, followed by a vote on the motion to proceed with the shell legislation, according to Schumer's office.

During the subsequent amendment process, Schumer would file an amendment swapping out the shell legislation with the actual text of the final bipartisan infrastructure bill.

In addition to the planned vote this week, the other major test that lies ahead for the infrastructure package is the nonpartisan Congressional Budget Office's so-called "score" of the bill, an assessment of how much the package would add to the federal deficit, based on how much the proposed funding would actually pay for.

Schumer has also set an ambitious Wednesday deadline for his caucus to reach an internal agreement to move forward on their massive budget resolution, complete with instructions on reconciliation.

If they can invoke that parliamentary maneuver, Democrats would be able to pass the $3.5 trillion budget with just a simple majority in Senate — which is evenly divided 50-50 with Republicans — rather than the 60 votes that the GOP could demand through the filibuster rules.

But there, too, the timeline is squeezed. Senate Budget Committee chairman Bernie Sanders, who will lead the process of drafting the legislation only agreed to the topline number last week.

If passed as Democrats envision it, the bill would mark both the biggest expansion of the social safety net in decades, and one of Washington's most sweeping efforts to curb climate change and prepare the country for its effects.

Republicans, meanwhile, have balked at the prospect of injecting trillions of dollars more into the economy while inflation is on the rise.

Many of the provisions in Biden's two spending bills are popular with voters, however. Democrats are relying on this public approval to help get the bills through the next few weeks and months.

The party's electoral hopes in 2022 likely hinge on whether Biden's two-track agenda actually passes, and whether Biden can maintain public support for it between now and November of next year.

Biden will promote the two bills, dubbed the "Build Back Better" agenda by the White House, on Monday in remarks about the economic recovery from the Covid pandemic.

Publicly, the president has tried to remain above the fray during the infrastructure negotiations.

"There may be some slight adjustments of the pay-fors and that's going to get down to what the Congress wants to do," Biden told reporters Wednesday afternoon after meeting with Senate Democrats on Capitol Hill. the White House. "I'm not sure what may happen, exactly how it's going to be paid for," he added.

But privately, senators in both parties have been in near constant communication with key White House envoys in recent days.

Portman said he spoke to White House negotiators on Saturday night about details of the infrastructure bill. On Thursday, a group of senators met with the White House team on Capitol Hill.

As the House returns to Capitol Hill this week, Speaker Nancy Pelosi, D-Calif., and her aides are working behind the scenes to head off moderate Democrats' potential issues with the $3.5 trillion budget plan, Punchbowl News reported Monday morning.

Pelosi has suggested that she would require the Senate pass both the infrastructure deal and the budget bill before she would take them up in the House.

"There ain't going to be an infrastructure bill unless we have a reconciliation bill passed by the United States Senate," Pelosi said last month.