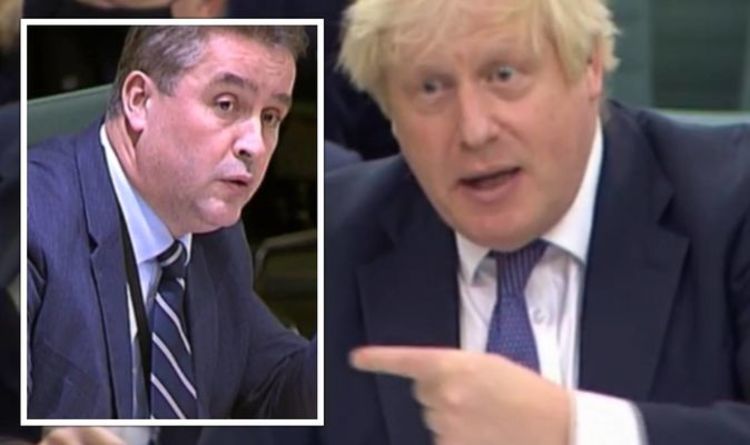 Boris Johnson: SNP is against every free trade deal

Chair of the International Trade Select Committee Angus MacNeil ruthlessly interrogated Boris Johnson over the UK’s trade deals with New Zealand and Australia post-Brexit. Mr MacNeil wanted specific numbers from the Prime Minister on how much the UK would recoup from these deals following forecasts Brexit will cost the UK GDP around 4.9 percent. The tense clash saw Mr Johnson erupt at Mr MacNeil as he delivered a lively offensive against the SNP and accused them of being against “every free trade deal that was ever done.”

Speaking on the Liaison Committee, Mr Johnson fielded questions from Select Committee chairs about his actions in government.

Mr MacNeil was invited to ask his questions and chose to grill the Prime Minister on Brexit.

He explained figures suggested Brexit will cost the UK 4.9 percent of GDP and wanted to illustrate that by converting it into £494.

Mr MacNeil then asked how much of that £494 would be recouped from the Australia and New Zealand deal.

Mr Johnson replied: “I think that both deals will give opportunities… I can’t give you numbers, it depends on how much the Australians decide to sell…”

Mr MacNeil attempted to interject several times but was told off and informed he should let Mr Johnson finish his answer before coming back at him.

The Prime Minister said it was a good opportunity for Scottish beef and whiskey and believed exports could increase by £100billion across the UK.

Mr Johnson then went on the offensive and accused Mr MacNeil of downplaying the importance of the trade deal.

He could be heard shouting over Mr MacNeil: “Are you turning your nose up at that?

“Are you against it? SNP is every free trade deal that is ever done!

“Never let it be forgotten that they were against joining the EU!”

The New Zealand and Australian free trade deals ends tariffs on certain goods with the main one being agriculture products.

However, UK farming unions fear there could be a fall in food quality from the deals as imported foods may not follow the same high standards.

National Farmers’ Union Vice-President Tom Bradshaw told Express.co.uk he was not against trade deals but was concerned the Australian and New Zealand deals gave little benefit to the UK.

He was concerned some imported products, like meats, would not match the same standards in the UK.