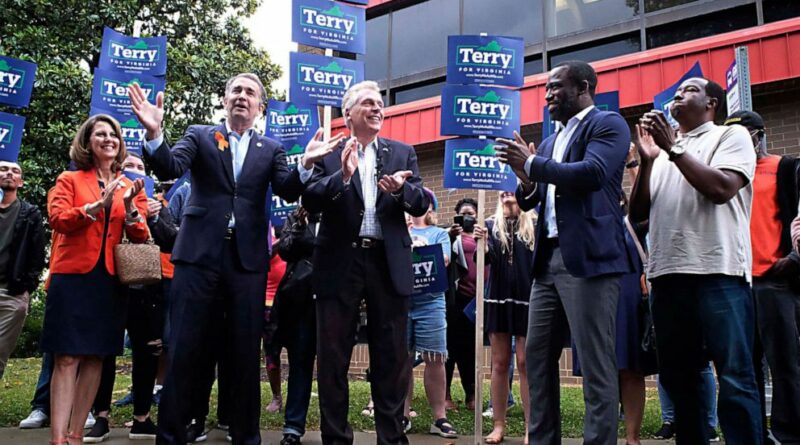 Former Gov. Terry McAuliffe is still in the running to win back his old job, coming out on top among the five candidates competing in Virginia’s Democratic gubernatorial primary Tuesday, the Associated Press projected.

In November, McAuliffe will face Trump-endorsed Republican Glenn Youngkin, a successful businessman and political newcomer who won the nomination at the Virginia GOP’s rank-choice voting “unassembled” convention in May.

McAuliffe prevailed over state Sen. Jennifer McClellan and former Del. Jennifer Carroll Foy, which means Virginia won’t make history in November by electing the nation’s first Black woman governor. He also beat Lt. Gov. Justin Fairfax, only the second African American elected to statewide office in the commonwealth whose campaign was hampered by 2019 sexual assault allegations, which Fairfax denied. Del. Lee Carter, a progressive unafraid to buck his own party, was the other candidate on the ballot.

Since announcing his campaign in December, McAuliffe, who first served as the commonwealth’s top executive between 2014 and 2018, was the front-runner — a status he held onto throughout the primary campaign despite his opponents making the case, especially in the final stretch, that he was not the right candidate for Virginia Democrats this cycle.

“McAuliffe barely won his election in 2013 against an extreme Trump Republican, so I do believe that we jeopardize our (House of Delegates) majority and the governorship if we put up McAuliffe as a nominee going into November,” Carroll Foy told ABC News last week.

In 2013, McAuliffe won the governor’s mansion against then-Attorney General of Virginia, Ken Cuccinelli. Cuccinelli later served in the Trump administration as acting director of United States Citizenship and Immigration Services and then acting deputy secretary of the Department of Homeland Security.

Youngkin is already planning to weaponize Carroll Foy’s criticism of McAuliffe against the nominee.

His campaign is launching new TV and digital ads Wednesday. One of the 30-second spots features Carroll Foy repeatedly blasting McAuliffe, at one point saying, “He failed the people of Virginia, so why does he deserve a second chance?”

“We need a new leader who will move Virginia forward and not back,” Carroll Foy says in the last clip, referring to her own candidacy.

But the ad then cuts to Youngkin saying, “A new kind of leader to bring a new day to Virginia.”

While only 3.5 points separated McAuliffe and Cuccinelli in 2013, the Democrat’s victory broke the so-called “Virginia curse” of candidates losing the commonwealth’s off-year gubernatorial race if they had the same party affiliation as the current occupant of the White House.

McAuliffe was unable to seek reelection in 2017, due to a unique Virginia law that bars governors from serving consecutive terms. Gov. Ralph Northam endorsed his predecessor — and potential successor — in April.

But since McAuliffe’s 2013 victory, Virginia has trended bluer — though political observers in the state warn Democrats shouldn’t get too comfortable.

In 2016, then-candidate Donald Trump lost the commonwealth, which was considered a presidential battleground, by about five points, but in 2020, his losing margin nearly doubled. Northam, then-lieutenant governor, beat Republican Ed Gillespie by nearly nine points. Two years later, Democrats took control of the state legislature for the first time in over 20 years, delivering the party a government “trifecta.”

As the first major contest since President Joe Biden’s inauguration, November’s election will test whether Virginia’s blue wave was a rejection of Republicans outright or more closely tied to Trump.

“Virginia is still competitive,” Larry Sabato, the founder and director of the University of Virginia’s Center for Politics, told ABC News in May ahead of the GOP convention. “The problem is (the GOP candidates) created a record for themselves on Trump. They have only said positive things — positive to very positive. … Terry McAuliffe has been around the block a few times. He knows how to link them to Trump.”

Trump may not be on the ballot or in the White House this fall, but since Youngkin’s nomination, McAuliffe, his campaign and the Democratic Party of Virginia (DPVA) have worked to do exactly that.

On Monday, Virginia Democrats launched a press tour called, “Where Trump Leads, Glenn Follows,” dispersing party leaders and activists across the commonwealth to blast Youngkin, especially his central campaign pillar of “election integrity,” and connect him to Trump and the former president’s “big lie” that election was “stolen” from him.