Home » Politics » Transcript of Biden’s Speech on the U.S. Withdrawal From Afghanistan 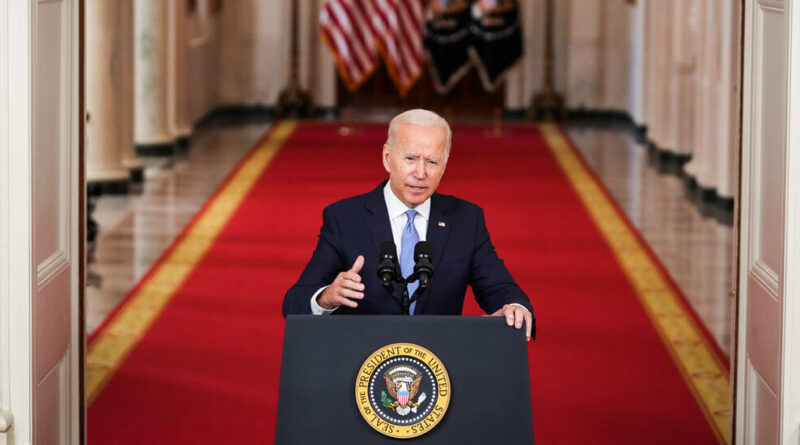 A day after U.S. troops left, the president called the mission to evacuate Americans and Afghan allies an “extraordinary success” and forcefully defended ending the United States’ involvement. 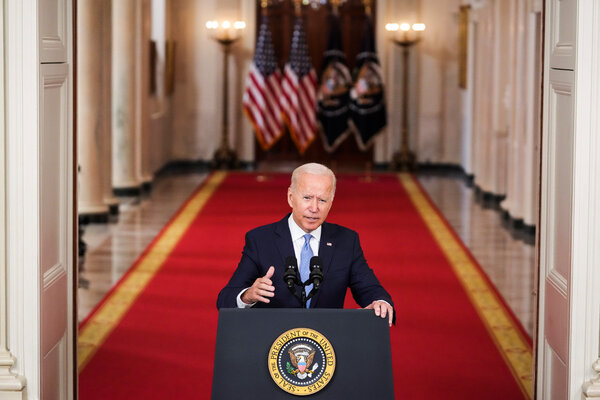 The following is a transcript of President Biden’s remarks about Afghanistan on Tuesday, a day after the United States concluded its two-decade war there with the end of evacuation flights and the departure of the last American troops.

Last night in Kabul, the United States ended 20 years of war in Afghanistan. The longest war in American history. We completed one of the biggest airlifts in history with more than 120,000 people evacuated to safety. That number is more than double what most experts thought were possible. No nation, no nation has ever done anything like it in all of history. Only the United States had the capacity and the will and ability to do it, and we did it today.

The extraordinary success of this mission was due to the incredible skill, bravery and selfless courage of the United States military and our diplomats and intelligence professionals. For weeks, they risked their lives to get American citizens, Afghans who helped us, citizens of our allies and partners and others on board planes and out of the country.

They did it facing a crush of enormous crowds seeking to leave the country. They did it knowing ISIS-K terrorists, sworn enemies of the Taliban, were lurking in the midst of those crowds. And still, the women and men of the United States military, our diplomatic corps and intelligence professionals did their job and did it well. Risking their lives, not for professional gains but to serve others. Not in a mission of war but in a mission of mercy.

Twenty service members were wounded in the service of this mission. Thirteen heroes gave their lives. I was just at Dover Air Force Base for the dignified transfer. We owe them and their families a debt of gratitude we can never repay, but we should never, ever forget.

In April, I made a decision to end this war. As part of that decision, we set the date of Aug. 31 for American troops to withdraw. The assumption was that more than 300,000 Afghan national security forces that we had trained over the past two decades and equipped would be a strong adversary in their civil wars with the Taliban.

That assumption, that the Afghan government would be able to hold on for a period of time beyond military drawdown, turned out not to be accurate. But I still instructed our national security team to prepare for every eventuality, even that one. And that’s what we did. So we were ready when the Afghan security forces, after two decades of fighting for their country and losing thousands of their own, did not hold on as long as anyone expected.

We were ready when they and the people of Afghanistan watched their own government collapse and the president flee amid the corruption and malfeasance, handing over the country to their enemy the Taliban and significantly increasing the risk to U.S. personnel and our allies.

As a result, to safely extract Americans citizens before Aug. 31, as well as embassy personnel, allies and partners and those Afghans who had worked with us and fought alongside of us for 20 years, I had authorized 6,000 American troops to Kabul to help secure the airport.

As Gen. [Kenneth F.] McKenzie said, this is the way the mission was designed. It was designed to operate under severe stress and attack, and that’s what it did. Since March, we reached out 19 times to Americans in Afghanistan, with multiple warnings and offers to help them leave Afghanistan, all the way back as far as March. After we started the evacuation 17 days ago, we did initial outreach and analysis and identified around 5,000 Americans who had decided earlier to stay in Afghanistan but now wanted to leave.

Our Operation Allied Rescue ended up getting more than 5,500 Americans out. We got out thousands of citizens and diplomats from those countries that went into Afghanistan with us to get Bin Laden. We got out locally employed staff at the United States Embassy and their families, totaling roughly 2,500 people. We got thousands of Afghan translators and interpreters and others who supported the United States out as well.

Hany Farid: Deepfakes give new meaning to the concept of 'fake news,' and they're here to stay

Andy Puzder: 2020 Dems clueless when it comes to one of the most critical economic challenges facing the US