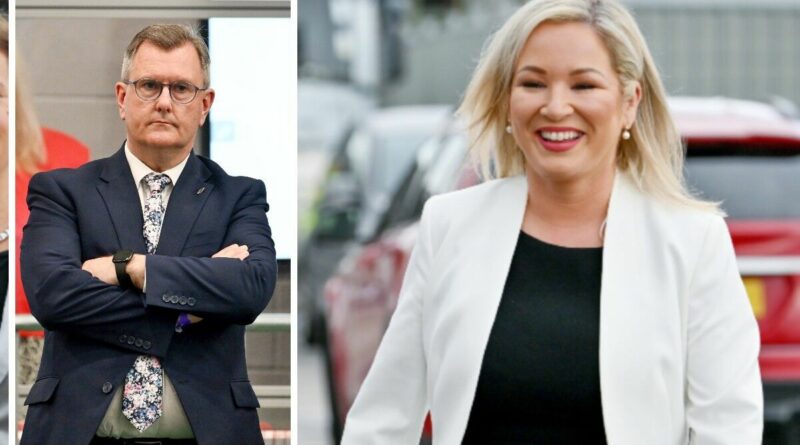 GB News: Sinn Fein will break up UK if they win in Northern Ireland

With the people of Northern Ireland voting to elect members of Stormont and choose a new First Minister, Michelle O’Neill looks set to rewrite history as the first Nationalist leader. Unionist politicians are under pressure to maintain their seats as former loyalist strongholds crumble with Sinn Fein surging ahead.

Some of the most notable unionist losses have been reported in Belfast.

The trend was set in the previous General Election when Sinn Fein’s John Finucane swept aside DUP leader Nigel Dodds to claim the seat.

The move has once again been seen as Sinn Fein’s Gerry Kelly and Caral Ni Chuilin received 8,395 and 7,932 votes respectfully, beating the DUP’s Philip Brett and Brian Kingston who secured 6,329 and 4,844 votes each.

Much closer was another Sinn Fein triumph in Derry.

Caoimhe Archibald narrowly defeated Maurice Bradley by a mere 82 votes, winning by 6,868 to 6,786.

The border counties of Fermanagh, Tyrone, and Armagh also played an important part in the election, in particular as talk emerges of a reunification referendum.

Sinn Fein won in East Tyrone, Fermanagh and South Tyrone as well as in Newry and Armagh.

Another DUP stronghold also fell in East Belfast, with the Alliance Party seizing the seat.

The DUP received 21.3 percent share of the first preference vote – a drop of 7 percent since the last Assembly election in 2017.

Alliance increased its share of first preference votes by over 4 percent to 13.5 percent to become the third-largest party.

The TUV sees the biggest swing since 2017, at +5 percent, after attracting 7.7 percent of first preference votes.

The ultimate goal of Sinn Fein – whose leader in Northern Ireland, Michelle O’Neill, declared the election a “historic day” – is for Northern Ireland to leave the UK and become one country with the Republic of Ireland.

It also stated that the Northern Ireland Secretary would agree to hold a poll if it appeared likely that a majority of people wanted a united Ireland.

Successive opinion polls suggest that is not yet the case, with the most recent, published in April, putting support at about a third.

Does this win for Sinn Fein spell the end of the union? Should Northern Ireland reunite with the Republic of Ireland? Will the election result spell a return to “The Troubles”? Let us know what you think by CLICKING HERE and joining the debate in our comments section below – Every Voice Matters!

While party leader Mary Lou McDonald said on Friday night her party was on the cusp of securing the post of First Minister, she said planning for a unity referendum would come within a “five-year framework”.

Speaking of the importance of the election for Sinn Fein, a statement by the political party read: “This election is about hope, progress and real change.

“It is about electing a First Minister who will work to deliver for all people.”

Under Stormont rules, shared leadership must be implemented in order for the parliament to function.

There must be representatives from both nationalist parties, who want Irish unity, and unionists, who want Northern Ireland to remain part of the UK.

The Northern Ireland Executive is made up of the first and deputy first ministers and their cabinet.

A process called the d’Hondt system determines the proportion of unionist and nationalist ministers appointed to the executive, based on the number of seats a party wins in the election.

Counting continues as all seats have yet to be declared.

Trump says Obama 'hiding' from questions about Bidens and Ukraine: 'I think he knows all about it'