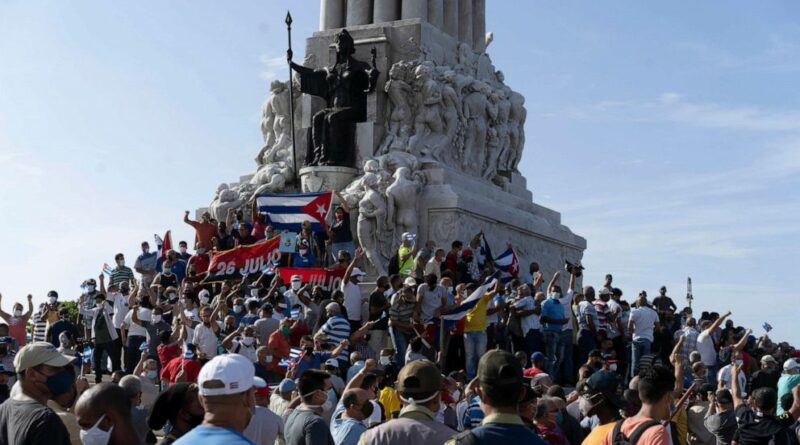 In his first steps toward his own Cuba policy, President Joe Biden is sanctioning the Cuban defense minister and its special forces for the aggressive crackdowns on protests across the island nation earlier this month, the White House announced Thursday.

Those protests were some of the largest and most widespread in decades as Cuba reels from a new wave of the coronavirus, the economic pain of COVID-19, and shortages of food and medicine.

They also short-circuited Biden’s administration into a response. Six months into his term, Biden has yet to formulate a policy toward America’s close neighbor after his former boss Barack Obama warmed relations with Cuba’s communist government and his immediate predecessor Donald Trump all but cut contact and implemented the toughest sanctions and restrictions.

“This is just the beginning – the United States will continue to sanction individuals responsible for oppression of the Cuban people,” Biden said in a statement Thursday, demanding the government “immediately release wrongfully detained political prisoners, restore internet access, and allow the Cuban people to enjoy their fundamental rights.”

The Treasury Department announced that it sanctioned Defense Minister Alvaro Lopez Miera and the Brigada Especial Nacional, the government’s special forces unit within the Interior Ministry that was deployed “to suppress and attack protesters,” according to the agency.

The new sanctions are not likely to inflict any new pain in Havana beyond the decades-old embargo, but they send a clearer message about where Biden will stand after Obama’s rapprochement and Trump’s heavy penalties. The Cuban Foreign Ministry has not yet responded, but government leaders including President Miguel Díaz-Canel repeatedly blamed the U.S. government or the Cuban diaspora in Miami for stirring up the protests.

“Treasury will continue to enforce its Cuba-related sanctions, including those imposed today, to support the people of Cuba in their quest for democracy and relief from the Cuban regime,” Treasury Secretary Janet Yellen said in a statement.

While he helped Obama’s efforts to ease tensions with Cuba and reopen trade and travel, Biden has kept most of Trump’s sanctions and restrictions in place so far as his administration completes his review.

Beyond Thursday’s sanctions, the administration announced other baby steps in staking out its own Cuba policy earlier this week, including creating a working group to study the issue of remittances — the money that Americans, especially Cuban Americans, send back to the island.

Remittances were severely restricted by the Trump administration, which said they were largely lining the pockets of the Cuban government as it charged large fees for their transmission. The limits imposed by Trump led Western Union, the financial services company, to close its operations in Cuba.

Biden had said last week that he would not ease those Trump-era restrictions, but administration officials denied they were backing away from that pledge, noting that the president said during a press conference that it was “highly likely that the regime would confiscate those remittances or a big chunk of it.”

“That’s certainly something that we’re mindful of and we’re looking at. That will be a point of discussion in these working groups,” Psaki said Tuesday.

State Department spokesperson Ned Price added that there’s no amount of Cuban government collection on remittances that would be “acceptable to us” but declined to get ahead of what the working group may decide.

He also announced that the State Department will launch its own review about adding staff at the U.S. embassy in Havana. Only a skeleton crew works there now after Trump’s first Secretary of State Rex Tillerson drew down embassy staff after the first reports of medical incidents sometimes known as “Havana syndrome” emerged publicly.

“The staffing at our embassy will serve to enhance our diplomatic, our engagement – our diplomatic activity, our engagement with civil society, our consular service engagement, all of which will be in service of helping the Cuban people to secure greater degrees of human rights, of freedom, of the universal rights that have been denied to them for far too long,” Price said Tuesday.

He declined to provide any timeline on when staffing changes could be made or speak to any changes in security after those “unexplained health incidents,” as the department calls them, that cause “Havana syndrome” — except to say safety will be a top consideration in this review.