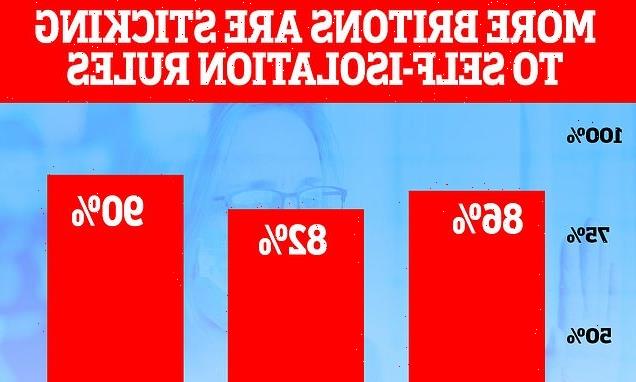 Nine in ten Britons now say they follow self-isolation rules after coming into contact with someone with coronavirus, official data shows – up from 84% in March

Nine in 10 people in England and Wales say they self-isolated when they were told to  after coming into contact with someone with coronavirus.

A survey by the Office for National Statistics in the first week of April showed 90 per cent of respondents said they stuck to the rules and stayed home for 10 days when they had to self-isolate.

This was a rise from 84 per cent of people in early March.

Experts have warned, however, that the results might be an overestimate because they relied on people answering questions honestly.

They added that other studies had suggested compliance with the self-isolation period was much lower, with one saying it may as low as one in five.

The Government has made it a legal requirement to self-isolate if you were in contact with someone who tested positive for the virus and were asked to by Test and Trace.

But not everyone follows the rules, which some find it difficult to stick to if they don’t personally feel ill or if they need to work to pay their bills.

Britain was under lockdown on April 10, when the survey was done – making it easier to stick to the rules – but small outdoor gatherings were permitted. 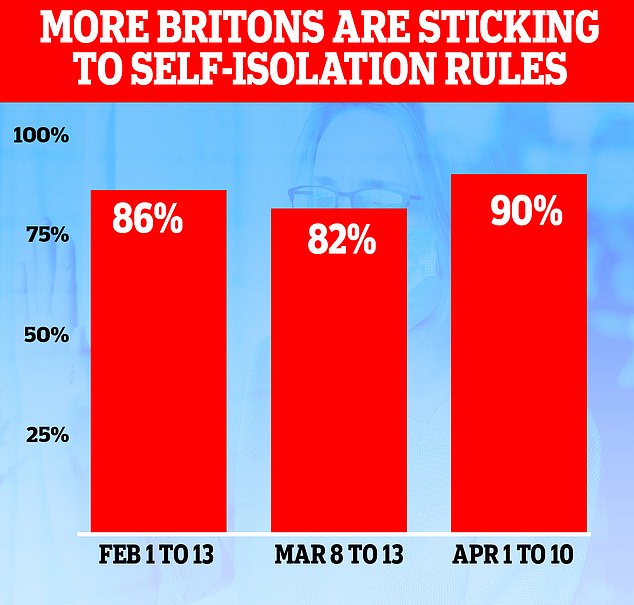 Office for National Statistics found more people were observing self-isolation rules. But experts said this was likely an overestimate 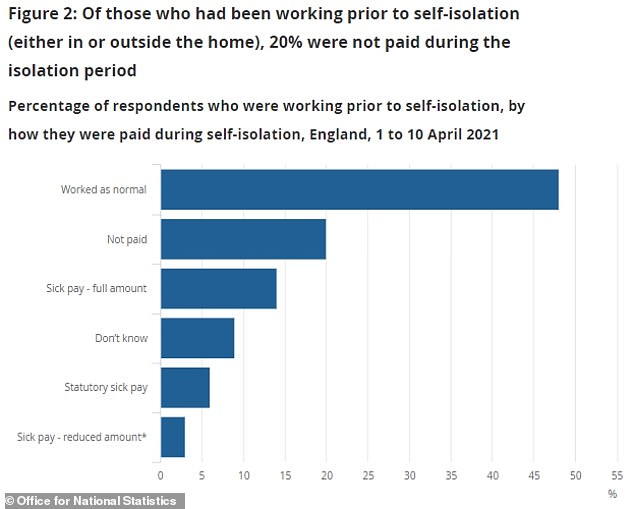 The ONS survey relied on answers from 1,100 people. It also found 20 per cent of respondents who self-isolated were not paid during the isolation period 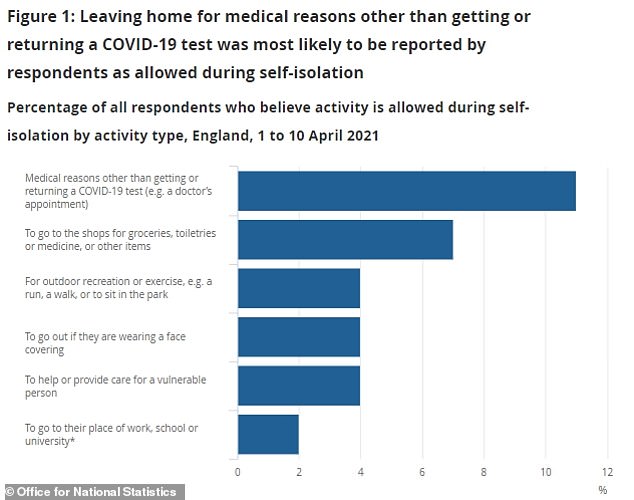 Leaving home to get medical supplies, groceries or toiletries was the most common reason for breaking self-isolation periods, experts said

Tim Gibbs, of the ONS public services analysis team, said: ‘It’s reassuring to see that a high percentage of survey respondents are self-isolating after being in contact with someone who has tested positive for Covid.

‘Although being in contact with someone who has tested positive for Covid doesn’t necessarily mean you will test positive, our data shows that people are aware of the risks of spreading the virus, even if they are asymptomatic.

Most of the 11 million AstraZeneca vaccines due to reach the Netherlands in the coming weeks will go unused, a top health official has revealed.

Jaap van Deldon, who heads the vaccination department at Holland’s public health institute, admitted that millions of the ordered Covid-19 doses will not be needed after the government restricted its use on under-60s due to concerns about incredibly rare blood clots.

It comes as the Netherlands battles soaring cases of coronavirus with new infections topping 8,000 in recent days. Intensive care doctors in the Noord-Brabant province have warned that wards at some hospitals are at breaking point.

The Netherlands, alongside a number of EU countries, has crippled its own vaccine programme with a series of stops and starts in its roll-out.

The country introduced age restrictions on its use amid a ‘possible link’ between the jab and very rare blood clots – even though the European Medicines Agency saying it is ‘firmly convinced’ the benefits of the jab outweigh the risks.

First the vaccine was halted in Holland, then permitted, and then banned for those under the age of 60 due to the blood clot fears resulting in many losing confidence in the jab.

While the Netherlands has ordered 11 million doses of the jab, which is only being given to people between the ages of 60 and 64, only 1.5 million doses have been handed out so far to the population of around 17 million.

‘Adhering to self-isolation rules is key in reducing the transmission of Covid, even after vaccination.’

The results were based on a survey of 1,100 people living across England.

They showed within the first 24 hours of receiving a notification to self-isolate, 96 per cent of respondents said they had no contact with non-household members.

A further 91 per cent said they had no contact with people outside their household after the first 24 hours to the end of the self-isolation period.

Among the 10 per cent who did not fully stick to the rules, 78 per cent said they left their house for non-permitted reasons.

Shopping for groceries, toiletries, or medicine was the most common reason (27 per cent), followed by outdoor recreation or exercise (13 per cent).

Around a third of respondents developed symptoms of Covid during their self-isolation period.

Discussing reasons for failing to stick to the rules, the ONS said deprivation – living on a low income – had ‘no significant impact’ on whether someone self-isolated.

Previous studies have suggested adherence to the self-isolation rules is very low despite ministers making them a legal requirement.

A King’s College London paper from September found just one in five Britons who had tell-tale Covid symptoms self-isolated following the rules exactly. They quizzed 30,000 in the research.

And a British Medical Journal study based on 26,000 participants published last month found less than half of respondents (42 per cent) stayed home for the full ten-day quarantine period.

Experts have suggested many are not self-isolating because of insufficient income support and concerns over struggles with mental health.

They add many housing options – such as small flats in city centres – make the requirement impractical.

Ministers cut the self-isolation period from two weeks to 10 days in December, amid warnings the period was too long and many people were not following the order.

Medical officers said there was sufficient evidence that people weren’t infectious after this time period. 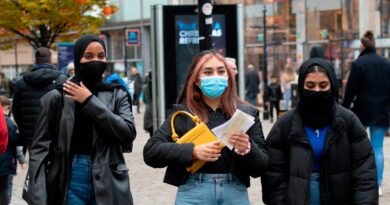 German coronavirus vaccine 'could be given to Brits before Christmas'