Home » World News » Ask Amy: My boyfriend and I are monogamous, but I want to be in an open relationship – The Denver Post

Dear Amy: My boyfriend and I have been together for a year and a half, and for the most part it has been amazing!

This is the best relationship I’ve ever had.

We’re very much in love. We have talked about marriage and one day starting our own family (he has three children, I have none).

The problem is that recently, my perspective regarding things I’ve believed all of my life has shifted.

For example, I’ve believed in monogamy and have worked hard to be monogamous.

However, I no longer feel that monogamy is right for me.

I no longer have any desire to be with only one person for the rest of my life. I don’t want to deprive myself of the experiences that this ONE life has to offer.

I revealed my feelings to my boyfriend during the summer and suggested an open relationship. It was the hardest thing I’ve ever had to do, because as much as I love him and he loves me, I don’t think he can handle it.

I told him I didn’t see any other way our relationship could work. It all seemed fine until he learned that I had actually slept with someone else (actually, multiple people).

It is obvious that he is hurt, even though I’ve tried to explain to him how my sexual desires for other people don’t reflect my love for him.

He says he’s fine with my choice, but he is visibly upset.

It hurts me to see him hurt, which is not fun.

I’ve started counseling and I’m trying to be patient to see if he can really do this, but is it right to keep this going, knowing that I have no intention on being monogamous, and knowing how much that hurts him?

— Open and Lost in the South

Dear Open: Let’s assume that your take on this is correct, in that your polyamorous lifestyle is devastating to your boyfriend.

Loving relationships are supposed to exist along a basically balanced axis. Partners don’t always get what they want when they want it, but ideally, they will share core values. A core value is a behavior or belief that you place at the center of your life.

Monogamy is a core value.

These two values are in direct conflict.

Is it fair for you to continue in a relationship where your choices hurt and diminish someone who loves you? Are you being loving and kind toward your partner?

The answer is: no.

Are your personal choices affecting his children? Probably. (At the very least, their father’s confusion or sadness will affect his behavior toward them.)

I assume you are making efforts to protect yourself and your boyfriend from STDs, but is it healthy to hook up with multiple sexual partners during a pandemic?

Dear Amy: Our almost 12-year-old niece has announced to the family that her preferred pronouns are now they/them. They now wish to be called a name typically used for boys.

This has been met with open-armed support from the parents, consistent with their laissez faire approach to parenting.

I often find myself reacting to their style of parenting (i.e., running wild in restaurants) in a judgmental way, so it’s hard for me to separate what is good for their daughter in terms of guidance versus letting the child use another, possibly temporary, way to control the whole family.

Does a good Auntie, who has generally been a rare authoritative figure in the child’s life, jump into their gender experimenting wholeheartedly, or does a good Auntie stick with tradition (using her birth name) until it’s more obvious that the child is indeed not cisgender?

Dear Auntie: You don’t get to decide another person’s gender, even if you suspect this declaration is a temporary experiment.

A good Auntie lets the parents chart their own course — even if she disagrees with it — keeps her mouth shut (unless the child is in physical danger) and loves her nieces and nephews without harsh judgment — just as they are.

Dear Amy: I am glad you suggested that “Teacher in a Quandary” make an effort to find the owner of a collection left in her classroom many years ago.

I liked your suggestion that she post a photo of one item to test true ownership. She should contact a local librarian to get help with this. It might save her time and energy if she’s not experienced with social media.

(You can email Amy Dickinson at [email protected] or send a letter to Ask Amy, P.O. Box 194, Freeville, NY 13068. You can also follow her on Twitter @askingamy or Facebook.) 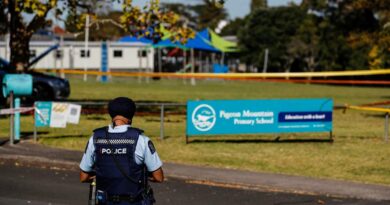