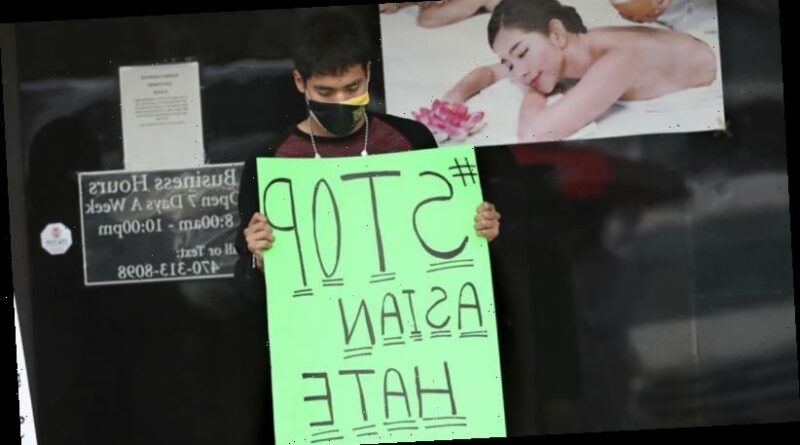 Washington: As Helen Kim Ho learnt that a white man with a self-described sex addiction was charged with killing eight people — including six Asian women — at spas in and around Atlanta on Wednesday, she imagined the stereotypes of Asian women that must have run through his head.

Atlanta police said the suspect told them his actions were not racially motivated — even though the shooter targeted businesses known for employing Asians, and six victims were Asian women. The suspect claimed he had a “sex addiction”, according to police, and wanted to eliminate temptation, which sounded to many women as if their sexuality was somehow to blame. 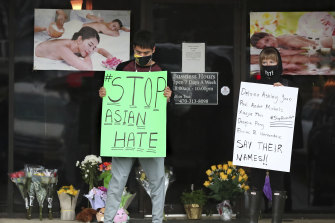 After dropping off flowers Jesus Estrella, left, and Shelby S., right, stand in support of the Asian and Hispanic community outside Youngs Asian Massage parlour near Atlanta where four people were killed.Credit:Atlanta Journal-Constitution/AP

“We’re not really Americans, we’re perpetually foreigners, and that idea plays out with women as being oversexualised,” said Ho, a Korean American and a founder of the advocacy group Asian Americans Advancing Justice in Atlanta. “All of that had to have played out in this man’s own mind. In addition to the unspoken notion that Asian people are easy targets.”

The gunman’s intent seemed crystal clear to Asians living in Atlanta and across the nation who have long had to confront stereotyping, hateful harassment and even violence — and who say things have gotten even worse during the coronavirus pandemic.

As soon as Crystal Jin Kim heard about the shooting, she reached out to her mother and father, who immigrated to the United States from Korea. In a text, she urged them “to be safe, to be careful, and to pray”.

She thought about rescheduling one of their upcoming doctor appointments, and she worried about her mother going to work at a small business in the Atlanta area — she asked that the type of business not be named for fear of her mother being targeted. 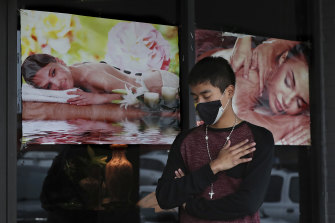 “Since I was a kid I’ve heard racial slurs yelled at me or my parents, or witnessed my parents being treated as if they were stupid because their English isn’t perfect, even though my mom’s English is really good,” said Kim, a second-generation Korean American. “Those small moments really add up. I don’t think we’ve ever spoken up against those small moments […] It’s easier to try not to think about it, or to try to let it go. To try to bury the hurt.”

People have leaned out of cars to scream “Asian!” at her, she said, and she has gotten comments about how she must like Jackie Chan, the Hong Kong martial artist and actor. As an Asian woman, she said men often ascribe characteristics to her that don’t reflect her personality — that’s she’s a pushover, or soft-spoken. 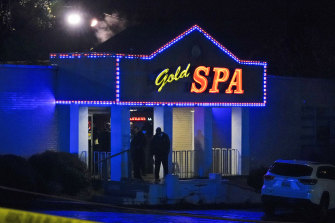 Shootings at two massage parlors in Atlanta and one in the suburbs left eight people dead, six of them women of Asian descent.Credit:AP

“Really, I’m not — I’m very talkative and extroverted,” Kim said. “It’s just people having these assumptions and treating me like a perfect Asian girl. Not even a woman, but a girl.”

David Palumbio-Liu, a Stanford professor and author of Asian/American: Historical Crossings of a Racial Frontier, said there is a long history, extending well before the Vietnam War, of the fetishisation of and murderous intent towards Asian women. He cited the Broadway musical Miss Saigon, which critics have said romanticises an imperialistic relationship and portrays Asian women as acquiescent and self-sacrificing.

The suspect “said it wasn’t racially motivated, but on the other hand, he’s going specifically to these spas where Asian women work precisely to serve the sexual fantasies of white males,” Palumbio-Liu said in an interview, “so to disentangle them is really to do a disservice to the fact that these things are so linked together”.

The shooting made visible the worst-case scenarios many Asians living in the US had feared. Many sadly expressed a similar sentiment: we knew this was coming.

The coalition Stop AAPI Hate has been documenting anti-Asian attacks since the pandemic started last March and says there have been nearly 3800 hate-fuelled incidents against the Asian American and Pacific Islander community in the US — a number the group says is likely a fraction of the problem’s true scale. About three in 10 Asian adults said they’ve experienced jokes or slurs about their race or ethnicity during the pandemic, according to Pew Research — the highest percentage among all races.

More than 68 per cent of documented reports of anti-Asian harassment and violence since the beginning of the coronavirus pandemic have been from women.

“I’ve never been this afraid to be Asian in America,” said Dorothy Kuo, 38, who attempted to explain to her six-year-old daughter what had happened in their community.

“I told her ‘Mommy is having a hard time focusing today because last night there were eight people killed.’ I just told her, honestly, what happened,” said Kuo, who is Korean American, like several of the victims.

Kuo said she felt it was important to tell her daughter so she understands the world she’s stepping into, one in which she might have to be more careful as an Asian woman.

“I’ve been refused seating at a restaurant,” Kuo said, “and even then I’ve never felt what I feel now.”

Jane Kim Coloseus, 32, grew angry when Atlanta police declared it was too soon to say whether the slayings were racially motivated.

“As an Asian woman, it brings out a lot of the experiences or harassment we have received throughout our lives in general, and just have that completely invalidated because of what the suspect is saying,” said Coloseus, a Korean American who is executive director of the non-profit Her Term, which recruits women to run for office in Georgia.

She has long felt like she had to be more guarded — whether it’s in the workplace or walking down the street — because of anti-Asian sentiments and the sexualisation of Asian women’s bodies. Asians have long been part of the fabric of the United States, she said, yet have “been kept on the sidelines as the model minority,” their voices ignored or muted.

“To me the equation is pretty straightforward,” she said of the shooter’s intent. “It is racially motivated.”