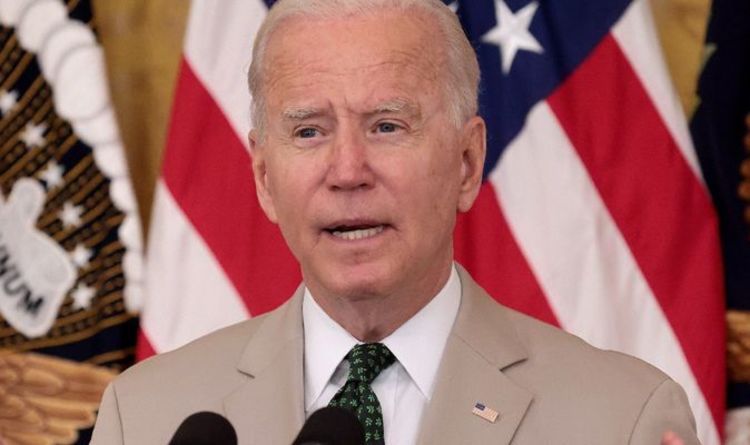 President Joe Biden’s national security advisor Jake Sullivan spoke on the US Today show on the ongoing situation in Afghanistan. He insisted President Biden stood by his decision to pull out US troops by September 11. He defended the President and said that he was left with a host of terrible decisions and was forced to make a choice.

“Actually, I think the worst-case scenario for the United States would be circumstances would be if we were adding back in thousands and thousands of troops to fight and die in a civil war in Afghanistan.

“A civil war that the Afghanistan army was not prepared to fight.

“That was the alternative that Joe Biden faced.”

Mr Sullivan reiterated why it was now the US should pull out of Afghanistan.

He said: “What we learned in the past two weeks is that if we had stayed one more year, or two more years, or five more years, or 10 more years, no amount of training, equipping or money or lives lost by the United States was going to put the Afghan army in a position to sustain that country on its own.

“The President had bad choices and the choice he made, to bring US forces home, to get us out of that civil war, to get our diplomats out of that embassy, and to ultimately ask the Afghans to step up and fight for themselves.

“It is heartbreaking to see what is happening in Kabul.

Afghanistan: Pundit hits out at Joe Biden's handling of crisis

“But the President had to make the best decision he could and he stands by that decision.”

In a lightning surge, terrorist forces took control of the capital Kabul on Sunday, two weeks ahead of Mr Biden’s deadline for the full withdrawal of American troops on August 31.

Joe Biden has faced significant criticism as the Taliban have removed the Afghanistan Government and assumed power.

Ex-President Donald Trump has most notably called for President Biden to resign over the issue.

In a fundraising email to supporters, Mr Trump expressed his frustration at the unfolding situation.

He said: “It is time for Joe Biden to resign in disgrace for what he has allowed to happen in Afghanistan, along with the tremendous surge in COVID, the Border catastrophe, the destruction of energy independence, and our crippled economy.

“It shouldn’t be a big deal, because he wasn’t elected legitimately in the first place!”