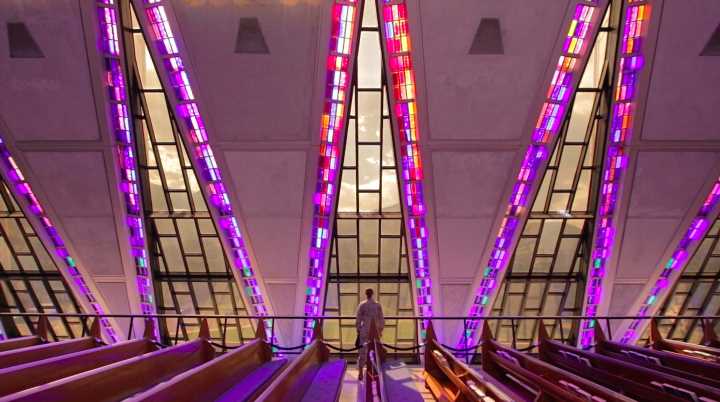 When Black Cube went into business five years ago, it arrived more as an idea than an actual entity. The non-profit billed itself as a “nomadic museum,” meaning it would show artworks at unexpected sites near and far without the costs and constraints of maintaining a permanent physical space.

Brick-and-mortar museums, the reasoning went, limit the freedom of curators and artists to think outside the box or, less metaphorically, beyond the limits of the static, blank-walled “white cube” galleries and museums where fine art is more often presented these days.

Places like the Denver Art Museum or the Museum of Contemporary Art Denver have their purpose — Black Cube was never anti-art-establishment — but those places can also feel elite, intimidating and insular, with a few, career-minded gatekeepers deciding who and what fits with the institutional mission. Better to bring art to the people — wherever the people are.

That is the formula Black Cube has employed to raise up and reconfigure Colorado’s visual arts scene over the past half-decade, producing a baffling number of intriguing, and mostly successful, commissions that have altered the level and style of art available for consumption here. Black Cube projects have popped up in the most usual spots.

Among them — as the newly published book “Black Cube, 2015-2020” documents — were street corners, alleys and public parks; construction zones, historic sites and ghost towns; and public libraries, warehouses, rooftops and other museums.

On a grand scale, Black Cube has coordinated pieces at Red Rocks Park, the U.S. Air Force Academy Cadet Chapel and, interestingly, the Denver Wastewater Treatment Plant. One project, Andreas Greiner’s “Monument for the 308,” took the form of a chicken skeleton large enough to fill the three-story atrium of the Denver Public Library downtown.

But it also has produced works on a more intimate level. Artist Anuar Maauad’s “Share,” for example, was a series of 100 small, bronze, text sculptures that were given out free to folks who promised to hang them on the facades of their homes and businesses. The sculptures are visible throughout the region now; Denverites come across them as they stroll neighborhoods on dog walks or when they go to coffee shops or rec centers.

Black Cube’s viability can be attributed, to a large degree, to the fact that it has a steady and mission-focused patron in the form of the David and Laura Merage Foundation. Laura Merage, Black Cube’s founder, is an artist herself, and her Englewood-based philanthropic organization has invested hundreds of thousands of dollars each year in the effort.

No doubt, it takes more than cash to make an art enterprise wholly successful. Truth is, the Front Range has its share of museums powered by single philanthropists, though they all struggle to produce exhibitions that resonate in the 21st century.

Black Cube’s strength comes from its endlessly open mind, and from its artist-centered mission, developed and carried out by Cortney Lane Stell, its executive director and chief curator. The museum is focused equally on presenting work and in developing the careers and ideas of the creatives it works with, sometimes through their one-off participation in group shows, but more often through time-limited fellowships with individual artists that culminate in public projects. Black Cube has worked with 14 fellows, mostly from the United States and Mexico.

Stell finds artists with good ideas and tells them: “You can do it anywhere in the world. You just have to do it in 18 months and we have to figure out how to fund it.” It’s a serious commitment.

That has led to a diverse number of projects — more than two dozen over the years — that have taken place primarily in Denver but also outside of it. Supporting Adriana Corral’s “Unearthed/Desenterrado,” a 33-foot-wide flag that explored the topic of labor relations between the U.S. and Mexico, meant flying the banner from a 60-foot pole near the border on a farm in Socorro, Texas. Black Cube showed two other artists, Laura Shill and Joel Swanson, in Italy, in an exhibition hall adjacent to the 2017 Venice Biennale.

For Stell, every project is a logistical challenge, and each one ultimately boils down to finding a suitable location. That’s rarely easy when you reject the idea of a permanent exhibition space as a core part of your mission.

Stell begs, borrows and partners where possible. She was able to set up Derrick Velasquez’s 2015 four-story “New Brutal” installation, a plywood-and-Tyvek commentary on Denver’s out-of-control urban development, in an empty Aurora airplane hangar that has since been turned into the Stanley Marketplace.

Another difficult project to place was “Unclassified Site Museum,” a pretend archeological site by the collective Sangree. The 2016 piece was set underground and viewed by the public through glass vitrines installed in the sidewalk. Stell convinced local developers Continuum Partners to give it a home at the former Market Street bus plaza on Denver’s 16th Street Mall, which Continuum was in the process of transforming into a residential and retail mega-project.

Among her more delicate challenges was the 2017 piece “Avalanche,” by the collective known as the Institute for New Feeling. The work looked at the trend of designer drinking water and “the absurdity of commodifying a basic resource.” It also required setting up a mock water factory on a three-story high, temporary scaffold.

Stell worked for months trying to secure its placement at the massive Denver Water Treatment Plant, not a site usually thought of as an art gallery. She exhausted every possible contact trying to get to the right gatekeeper until one day she entered into a casual conversation with an employee she saw taking a smoke break on the grounds. The worker turned out to be an assistant to the director of operations, who agreed to hear her out. “Before I could describe the project — in the first five minutes — they said yes,” Stell said.

All of Black Cube’s projects — more than two dozen — are described in detail in the new book, which features scores of explanatory photos and concise descriptions of intent and execution. There’s an entertaining Q&A where Stell interviews herself explaining how Black Cube works and how it chooses projects, a process that she says starts with “a commitment to the artist, not the artwork.”

The book is an easy read, but also an important document because it records a new, and crucial, era in Denver culture. Black Cube isn’t the first or only visual arts presenter without a permanent space — New York’s Creative Time is the ground-breaker in this regard — but it does record Denver’s place in an important national movement that’s taking art into the 21st century.

In a way, its self-publication mirrors all of Black Cube’s make-it-happen projects. The organization wanted a tangible way to document its existential intangibleness and so it found a spot for that inside a book, an object that, at 312 pages and 2½ pounds, might be all the physicality a nomadic museum ever needs.

For more info on Black Cube and the book, visit its website, blackcube.art.