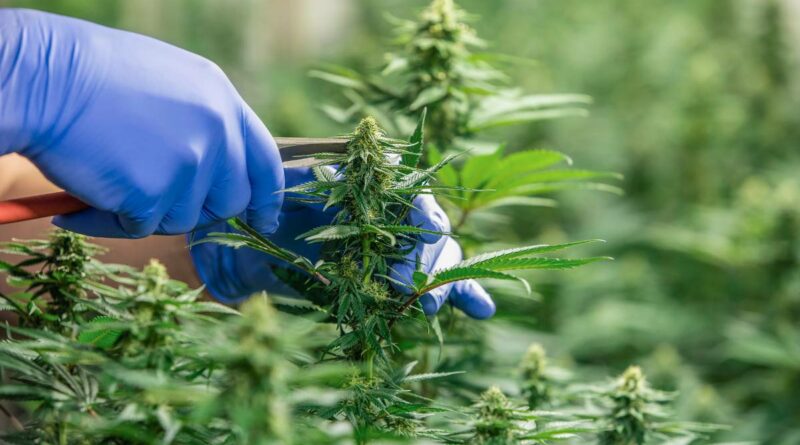 Scientists have launched a homegrown effort to tackle a disease damaging cannabis crops around the world – and just discovered in plants here.

Mainly spread through pruning shears or other tools, HLvD can leave a plant with curled, yellowed leaves and fewer flowers – but in other cases it can be present without ever causing symptoms.

As cannabis seeds are imported here, it was only a matter of time before HVLd was identified locally.

Scientists suspect HLvD – originally discovered in hops and present here since the 1980s – had probably been affecting cannabis crops here for years.

But its detection came at a time a domestic industry was taking off, on the back of new regulations allowing medical professionals to prescribe their patients cannabis for health purposes.

In dollar terms, the stakes for keeping the disease under control are high.

AgriBusiness Group has suggested that, if 1 per cent of Kiwis used medical cannabis, the local market could be worth $379 million each year.

And within four years, the worldwide legal market could be valued at well over $100 billion.

“HLVd has been prevalent throughout the United States, stunting yields as much as 40 per cent, so when Kai recognised one of the crops wasn’t doing so well, we acted,” Helius chief executive Carmen Doran said.

“The research then began as did our process improvements to avoid any future occurrence, contamination or spread.”

The company is now teaming up with Crown research institute Plant and Food Research to find new ways of diagnosing and managing it and learn more about how it spreads within and between plants.

There are plans to develop new real-time testing methods, along with measures to treat plant material to remove any of it before cultivation.

“Early detection of a disease is a major factor in minimising its effects on a sector,” Plant and Food Research chief scientist Dr Richard Newcomb said.

“By identifying the disease early in New Zealand we can work with the industry, and the associated hemp industry, to develop diagnostic and management techniques that work for the New Zealand sector.”

Helius has also partnered with agri-tech company, BioLumic, to test for HLVd on its behalf.

The two companies have also been working together, with BioLumic developing a unique ultraviolet technology to stimulate cannabis growth in trials at its Palmerston North facility.

“This viroid is highly transmissible and could have been devastating if New Zealand’s commercial cultivation was underway at significant scale,” she said.

“This early discovery and the research now underway will undoubtedly save our medicinal cannabis sector down the track.”

“We were fully aware of HLVd’s prevalence overseas, and have put in place measures to keep it out of our growing operations,” he said.

“In particular, the risk of HLVd was a key consideration when selecting Puro’s preferred seed suppliers.”

Meanwhile, a new study has found that two-thirds of Kiwi medicinal cannabis users intend to get a prescription, rather than continue using the drug illegally.

They found younger people and those with a higher income were more likely to say they would get a prescription.

Māori, lower income groups, and those who grew their own cannabis at home were less likely to say they would, which could indicate a perception the new scheme was restrictive and expensive.

Similar schemes established overseas – particularly in the initial stages – had suffered from poor engagement with patients and health professionals, she said.

Earlier research has estimated 5 per cent of Kiwis use cannabis for therapeutic or medical purposes – and mostly obtained from illegal sources.

While medicinal cannabis users who move to the new scheme would benefit from access to quality-assured products and medical oversight, how many ultimately transitioned depended on a range of factors, Rychert said.

“In this study we wanted to understand what types of users are more likely to transition to the new medicinal cannabis prescription scheme.”

The survey, carried out in mid-2019 with funding from the Health Research Council, generally found two in three users wanted access to prescriptions once the scheme launched.

Those who mostly used cannabis by smoking were also more likely to want to engage – despite smoked herbal cannabis products not being allowed under the scheme.

“The higher likelihood of transitioning by those who smoke was surprising but it could indicate that these users are aware of the health risks of smoking – and that the new scheme will offer lower-risk means of administration such as oral preparations and cannabis vaping products.”

Māori medicinal cannabis users and those who mainly grew their own cannabis were less likely to join.

“The lower rates of engagement for Māori, lower income groups and those who grow their own cannabis suggest these users see the new scheme as too restrictive and expensive.”

“Other countries have tried to address it by letting people grow their own cannabis at home and allowing not-for-profit supply for patients via ‘social clubs’,” she said.

“These solutions are worth considering, but they would extend the scheme beyond the current pharmacy model.”

Woman, 20, ‘raped by two men on Majorca beach runs half-naked into the sea to escape her attackers’