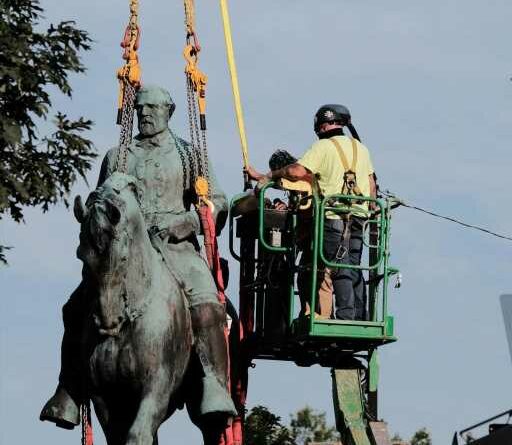 CHARLOTTESVILLE, Va. — Four years after a woman was killed and dozens were injured when white nationalists protested the planned removal of a statue of Robert E. Lee in Charlottesville, Virginia, workers removed the statue Saturday, along with a nearby monument to Stonewall Jackson, another Confederate general.

The larger-than-life-sized statue of Lee was hoisted off its granite base shortly after 8 a.m. as a crowd of about 200 looked on. As the flatbed truck carrying the bronze statue rumbled down East Jefferson Street, a toot of the truck’s horn prompted cheers and applause.

Jackson was removed about two hours later, and shortly after noon, the City Council held an emergency meeting and voted unanimously to remove yet another statue, this one of explorers Meriwether Lewis and William Clark. The 1919 sculpture has long provoked concern for its depiction of Sacagawea, the Shoshone woman who is shown along with the two better-known explorers in a crouching manner that some see as subservient.

John Edwin Mason, a history professor at the University of Virginia, scurried around the perimeter of the park as the removal of the Lee statue was underway to keep a close eye on the proceedings. “I’m really happy it’s a boring morning, and boring means that no bad things happened,” he said. “The ordinariness of this occasion is fine.”

The decision by the city Friday to finally take down the statue of Lee came more than four years after the City Council initially put forth a plan to remove it from what was then known as Lee Park, prompting scores of white nationalists to descend on Charlottesville in August 2017 in a “Unite the Right” rally to protest the removal.

Counterprotesters confronted the rally, and a white supremacist drove into a crowd of peaceful demonstrators, killing a woman, Heather Heyer, and injuring dozens of others. The violence that day, as well as the open racism and anti-Semitism displayed at the rally, intensified calls to remove Confederate statues across the country.

“It feels good. It’s been a long time coming,” said Zyahna Bryant, a University of Virginia student who was a ninth grader in Charlottesville when she started a petition in March 2016 calling on the city to remove the statue of Lee and to rename Lee Park, which is now called Market Street Park.

“The statues coming down is the tip of the iceberg,” Bryant said. “There are larger systems that need to be dismantled. Educational equity is a good place to start.”

Mike Signer, an author and lawyer who was a city councilor and mayor when the “Unite the Right” rally was held in 2017, called the removal “a real step forward.” He said the statues had become “totems for these terrorists.”

“In so many ways, Charlottesville was a microcosm for what’s happened in the country: the advent of flagrant, open, violent white nationalism in public streets,” he said. “The ‘Unite the Right’ rally was clearly a prologue for the insurrection on Jan. 6.”

He said he was pleased that the City Council had moved quickly after the Virginia Supreme Court ruled in April that the city could remove the statues, a decision that overturned a 2019 Circuit Court ruling that found the statues could not be removed because they were protected by state law.

“The removal will come as a relief to a lot of people, and there will be some healing that, hopefully, will take place,” Signer said.

Discussions about the removal of the statue of Lewis and Clark and Sacagawea had been underway, and not long after the City Council’s vote Saturday, crews arrived to begin pulling it down.

“It was a very offensive statue,” Rose Abrahamson, an Idaho educator and member of the Shoshone tribe who said she was a great-great-great niece of Sacagawea, told the council Saturday.

She said she supported discussions of giving the statue to a local museum, the Lewis & Clark Exploratory Center. “We have come a long way to be the human tribe that we should be,” she said.

Over the last month, the city has solicited expressions of interest from museums, historical societies and others interested in acquiring the monuments.

After Byrant submitted her petition, a commission created by the city to examine Charlottesville’s monuments found that the statues of Lee and Jackson, like other Confederate monuments across the country, glorified the South’s racist past.

“The Lee and Jackson statues embodied the Lost Cause interpretation of the Civil War, which romanticized the Confederate past and suppressed the horrors of slavery and slavery’s role as the fundamental cause of the war while affirming the enduring role of white supremacy,” the commission wrote.

The Lost Cause mythology, the commission added, helped justify segregation in housing, employment and education and the disenfranchisement of Black voters.

Jock Yellott, the director of the Monument Fund, which had sued to stop the removal of the statues, said that taking down the monument to Lee would hinder public discussion of history, including Lee’s role in the Civil War.

“If you take it down, there’s nothing left to talk about — just an empty space,” he said as he stood near the statue on Friday. “There’s nothing to take a picture of, no reason for a tourist to come here, and that is a loss to the city.”

In Market Street Park, Cornelia Johnson, a Charlottesville resident who works as a church choir director and pianist, said she didn’t agree with those who consider the removal of the statues to be a “great achievement.”

“Taking a statue down is not going to make things better for people of color,” she said. “Change has to come from within. And it doesn’t bother me one way or the other if they leave it up.”

But Sally Hudson, the state delegate who represents Charlottesville and was one of the sponsors of the bill that allowed localities to remove war monuments, said the move was long overdue.

“It’s been a long time coming, and our community is ready to reclaim this space,” she said Saturday. “Now we have the opportunity to reshape what it feels like to be here and make sure this is a place where everyone in Charlottesville feels welcome.”

Trump hints he may fire Dr. Fauci after the election