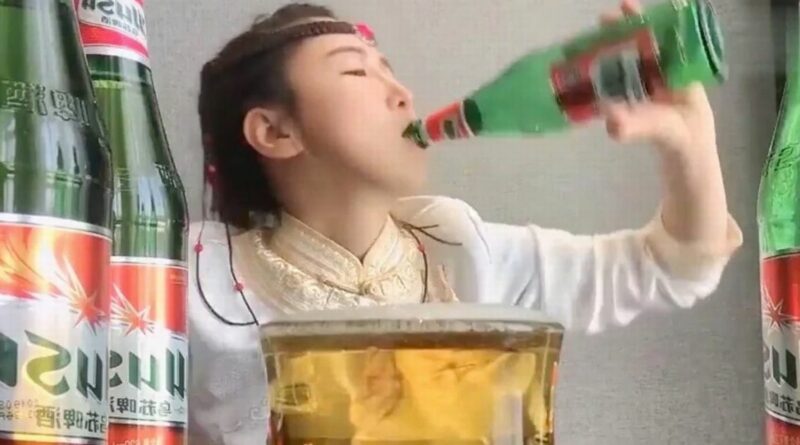 The Chinese government wants to crack down on influencers drinking themselves unconscious on live stream.

Binge drinking in front of an audience has become a huge viral trend in the country, particularly since the onset of the coronavirus pandemic with millions of people stuck at home.

Social media stars, some with millions of fans, will assemble a vast quantity of alcohol, switch on their webcams and start pounding back drinks until they vomit or pass out — while their audience cheers.

Some upload binge drinking live streams four or five times a week in a bid to maintain their fanbase and attract new followers. The practice was condemned for being unhealthy and wasteful, but now binge drinking videos have popped up in their wake — which are possibly even worse on both counts.

Streamers have been known to down as many as ten 100ml bottles of liquor with a high alcohol percentage, while one famous blogger from Inner Mongolia filmed herself finishing five 620ml beers in one sitting. Sometimes viewers demand proof that the creator is drinking real high-strength alcohol, often by lighting their beverages on fire.

And that's not the only occupational hazard they can run into. In 2019 a Chinese man named Chu who wanted to become a famous blogger died after filming himself drinking alcohol, as well as things like cooking oil, every day for three months.

Now the Chinese Communist Party (CCP) is looking to step in. An editorial in the state newspaper the People's Daily said on Monday that binge drinking live streams should be banned. "This kind of live-streaming competes with each other's drinking capacity for online traffic," the article read.

"This practice breaches society's bottom line and is actually exchanging money with [someone's] life. The online traffic generated by it is toxic."

Later that week an editorial published in the Guangming Daily, the paper run by the CCP's central committee, blamed social media platforms for enabling the dangerous trend.

"Those platforms only acted after the media reported the phenomenon, triggering public pressure on them," it said.

"This gave us an impression that the platforms do not take any initiative to oversee it and did respond at a slower rhythm.

Chinese Dietary Guidelines say men should drink no more than 25 grams of alcohol a day, while a woman's daily intake should not exceed 15 grams.

Can’t find toilet paper amid the coronavirus pandemic? Here’s why. – The Denver Post