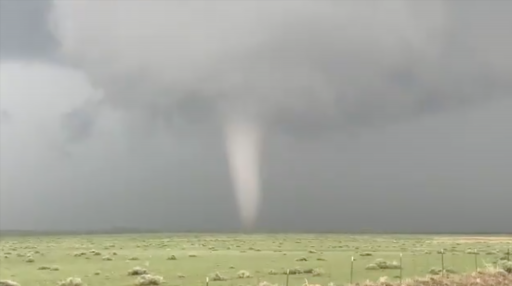 More than a dozen tornadoes tore through the Eastern Plains of Colorado last weekend during a multi-day threat of severe weather that included the Denver metro and I-25 corridor. Hail in excess of 3 inches in diameter fell and winds gusted to 70 mph during some of the severe storms that erupted.

More severe weather occurred Monday and a tornado watch was in place over far eastern Colorado.

It is not uncommon to have severe weather during this time of the year but our peak severe weather season is from June to July with the week of June 17 being the height of tornado season in eastern Colorado. The 16 tornadoes that touched down over the weekend “will most likely be rated EF-0 or EF-UNK (unknown) since they touched down in open fields and did not produce much damage,” David Barjenbruch, a meteorologist at the National Weather Service in Boulder, said.

There were reports of powerlines down in Sterling and Proctor — that damage was assesed by the NWS Boulder team and tornadoes were rated accordingly. Overall, this is exactly what we like to hear, not much damage, no fatalities, no injuries — just amazing imagery of the wild weather our state can see.

We had a slight risk of severe storms across eastern Colorado on Saturday.  Eventually, the Storm Prediction Center (SPC) issued a tornado watch which included all of eastern Colorado from Trinidad to Ft. Collins. During the afternoon and evening. Nine tornadoes touched down, there were seven reports of large hail and five reports of damaging high winds.

Sunday came with our first enhanced risk of severe weather of the season and our first EF-1 rated tornadoes.

“After further coordination with local emergency management and damage descriptions, we’ve rated two of the tornado touchdowns, one just to the southeast of Sterling and one near the Proctor, Colorado, area as EF-1,” Barjenbruch explained.

In total, there were seven tornadoes on Sunday — six of which were associated with a mesocyclone and supercell. The other tornado, dubbed a landspout tornado, formed from the collision of an updraft over a weather boundary.

The two EF-1 tornadoes on Sunday tore down 20 powerpoles near Sterling and Proctor but left no other damage in the area. Most of the tornado touchdowns occurred in Lincoln, Washington, Morgan and Logan counties.

Thunderstorms produce some of the most dramatic sunsets at the end of the day and this round was no different.

Mammatus clouds filled the skies Sunday evening with bubbling underbellies that were illuminated by the setting sun. Mammatus clouds are almost a guaranteed bet to be seen after a busy severe weather day. They are a sign of how turbulent the atmosphere was.

And although there were some delays and stalling at Denver International Airport, the people who got to fly through and around the storms had quite the sight to see.

The forecast ahead looks decent for much of eastern Colorado. During this time of the year, it’s always possible to have afternoon thunderstorms spark up and those can turn severe but the chance of organized severe weather remains low this week.

The weekend storms largely missed Denver proper but Denver International Airport (where the official weather records are taken for the city) picked up some decent thunderstorms — 1.30 inches of rain fell at the airport boosting the total amount of rain we’ve seen this year to 9.78 inches. That’s more rain than we saw in all of 2020 (8.74 inches) and makes this the wettest start to the year since 1983.

'My own fans made monkey noises and threw bananas at me – but we’ve come a long way since then, unlike the racist Bulgarians’