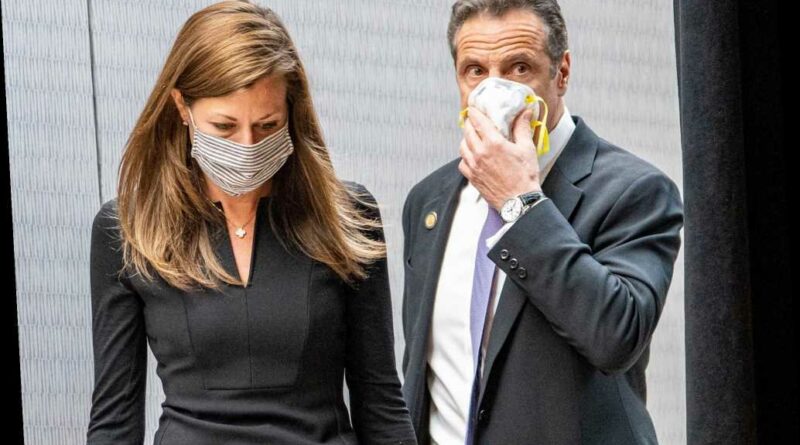 The stunning admission by Gov. Cuomo’s top aide that the administration withheld the state’s nursing home death toll out of fear that the damning numbers would “be used against us” by the feds has sparked bipartisan calls for a thorough probe — and prosecution of the governor.

“Governor Cuomo, the Secretary to the Governor, and his senior team must be prosecuted immediately – both by the Attorney General of New York State and the U.S. Department of Justice,” Republican Rep. Elise Stefanik wrote in a statement.

“This bombshell admission of a coverup and the remarks by the Secretary to the Governor indicating intent to obstruct any federal investigation is a stunning and criminal abuse of power,” Stefanik continued.

“The families who lost loved ones, New Yorkers, and all Americans deserve accountability from the U.S. Department of Justice that will be independent and not swayed by the desperate political pressure from Governor Cuomo.”

New York Senate Minority Leader Rob Ortt, a Republican, said in a tweet: “Governor Cuomo and his administration must be investigated from top to bottom and he must be stripped of his emergency powers. Justice needs to be brought for the grieving families who have been ignored to protect Governor Cuomo and his Democrat allies in the Legislature.”

In a separate statement, he said: “The news today that Governor Cuomo’s top aide admitted to deliberately withholding information about COVID-19 deaths is the latest in a string of disturbing acts of corruption by his administration.

“This is clearly a gross obstruction of justice. Instead of apologizing or providing answers to the thousands of New York families who lost loved ones, the Governor’s administration made apologies to politicians behind closed doors for the ‘political inconvenience,’ this scandal has caused them.

The comments come after The Post revealed that Secretary to the Governor Melissa DeRosa said during a video conference call with state Democratic leaders that the administration had rebuffed a legislative request for the tally in August because “right around the same time, [then-President Donald Trump] turns this into a giant political football,” according to an audio recording obtained by The Post.

In addition to attacking Cuomo’s fellow Democratic governors, she said, Trump “directs the Department of Justice to do an investigation into us.”

“And basically, we froze,” DeRosa told the lawmakers.

State Attorney Letitia James recently announced in a damning 76-page report that the Empire State’s nursing home death toll from COVID-19 may be more than 50 percent higher than officials have claimed because Cuomo’s administration had not revealed how many of those residents died in hospitals.

The bombshell findings could push the  DOH tally of 8,711 deaths to more than 13,000, based on a survey of 62 nursing homes that found the state undercounted the fatalities there by an average of 56 percent.

“The Cuomo Coverup led to needless deaths of New Yorkers everyone knew were at risk. And Fredo and CNN helped him hide it while laughing about it!” Greene said in a tweet, using former President Trump’s reference to CNN anchor Chris Cuomo based on Fredo Corleone, the ineffective son from “The Godfather.”

He added: “The more the truth comes out, the worse it gets for Cuomo.”

Democrats, including Public Advocate Jumaane Williams, also assailed the governor, tweeting: “To continual defenders of @NYGovCuomo, how is this ok? How is it not #Trump like?

“And when FORCED into admission, the most you get is a sorry we got caught…and not even directly from him or to the families. All while asking NYers to trust your decisions,” he added.

State Sen. Alessandra Biaggi (D-NY) also weighed in, saying in a tweet: “You’re only sorry that you all got caught. Because of your decisions, thousands of people died who did not have to die. We’re not ‘offended’, Melissa, we’re furious – with extremely good reason.”

State Sen. Andrew Gornardes (D-NY) called it a “betrayal of the public trust.”

“There needs to be full accountability for what happened, and the legislature needs to reconsider its broad grant of emergency powers to the governor,” he said in a tweet.

In a prepared statement, Cuomo spokesman Rich Azzopardi said, “We explained that the Trump administration was in the midst of a politically motivated effort to blame democratic states for COVID deaths and that we were cooperating with Federal document productions and that was the priority and now that it is over we can address the state legislature.”

“That said, we were working simultaneously to complete the audit of information they were asking for,” he added.