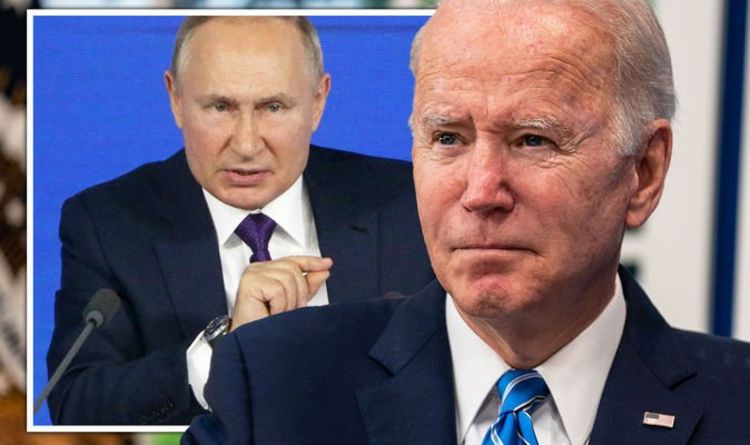 Leaders in the West fear Vladimir Putin is planning an invasion of Ukraine. Up to 100,000 Russian troops are understood to be located near the border, along with heavy equipment. The Kremlin said earlier this week there are “no plans” for an attack. But US officials have stated action could simply have been delayed due to a relatively mild winter.

They told the New York Times that a warmer-than-usual winter in that part of the world has prevented the ground from completely freezing over.

So long as the ground remains muddy, they added, an attack will be held off.

This tipoff has reportedly pushed the White House into desperate territory.

A team of meteorologists has been enlisted in to keep tabs on the likely weather in Ukraine over the coming weeks, an official told the paper.

The source wished to remain anonymous.

It is believed that if the land remains in its current conditions, Mr Putin could be forced to push back plans for a ground offensive to February at the earliest.

At diplomatic talks in Geneva on Monday, Russia insisted it had “no plans” to attack Ukraine.

Deputy Foreign Minister Sergei Ryabkov told reporters: “We explained to our [US] colleagues that we have no plans, no intentions to attack Ukraine.”

He added: “All measures for the combat training of troops and forces are carried out within our territory.

“[There was] no reason to fear any escalation scenario in this regard.”

Despite this, the Kremlin maintained its position that Nato does not ally with Ukraine.

Mr Putin is critical of any attempt for Ukraine to become closer to West.

US Deputy Secretary of State Wendy Sherman subsequently made it clear Russia would not be bowed-down to on this matter.

She said: “We will not allow anyone to slam closed NATO’s open-door policy, which has always been central to the NATO alliance.”

Ms Sherman described talks as “frank and forthright”, but both sides noted that no breakthrough was reached.

The White House, hoping to force a sense of reluctance into the minds of Kremlin strategists, said any attack on Ukraine would lead to significant consequences for Russia – “well beyond what they faced in 2014”, when Russia annexed the Crimean Peninsula from Ukraine, as Ms Sherman put it.